Nintendo released the Switch a bit over a year ago and the console became a massive hit during its short shelf life. The console exquisitely with consumers and it looks like Nintendo has another best seller, after the company suffered massive losses with the Wii U.

A couple of reasons are behind the consoles huge sales numbers, one of them surely being the dual nature of the Switch, allowing it to be used both as a home and handheld console. The other reason is the console's great games library that includes plenty of gems and lots of third-party titles. The console also became a holy grail for indie games (the best of which will be presented soon, no worries), making the Switch an excellent choice for both hardcore and casual gamers.

This is an auto-include. Mario Kart 8 was an amazing game with one huge problem - it was available only on the doomed Wii U. The updated version of the game offers the same insanely fun racing along with great art style and a roster filled with classic characters from different Nintendo games. The good old Mario Kart racing will never get old and this title just further proves that saying. The game is perfect for casual players since it features many options that allow for a simpler racing mechanics, and since blasting others is the most important thing in Mario Kart, giving players tools to focus just on hitting other players is a great idea.

The game features every single DLC pack released for the original, it also offers incredible multiplayer support. There's a four-player split screen option and since one player can drive with just one half of the Joy-Con controller you won't need additional ones in case you have two laying around (and most of us does because couch multiplayer is something that is best experienced on the Nintendo Switch). The game can also be played in a group of eight when two Switch consoles are wirelessly connected. And in case you and your friends have three consoles, you can play the game in an insane 12-player mode!

Another multiplayer gem made by Nintendo, Splatoon 2 is the sequel for a game that was praised by critics but wasn't very popular among gamers because, wait for it, it was a Wii U exclusive. Luckily, Nintendo decided to make the sequel one of the launch titles for the Switch and the game surpassed all expectations and became the most popular multiplayer title for the new console.

So, the formula is simple yet so different from your everyday online shooter. Instead of trying to kill members of the other team, you and your teammates must use your ink-shooting guns to paint a bigger portion of the map than the enemy team. This can lead to some extremely intense action, and you won't believe how painting with guns can be an adrenaline-filled experience. Since the game is based on four-on-four battles, you have to cooperate with teammates and going solo won't get you anywhere because the enemy team will quickly paint over all your hard work.

The game features more than a solid single-player campaign that will give you a couple of hours of fun and will prepare you for multiplayer battles. Aside from the classic, competitive, multiplayer modes, the game includes a co-op mode called Salmon Run that can be played with up to four friends online, or in local wireless. Sadly, the game doesn't support split-screen co-op, and in case you want to play it via local wireless you should know that all players must have their own copy of the game.

Okay, most of you probably know Doom (2016 version) for its amazing single player campaign, but if you're on the Switch, the game's multiplayer mode is the best (and only at the moment) way to experience classic, bloody, fast-paced, online shooting extravaganza on the console. The game offers a solid number of weapons and skins to unlock so you will always have additional reasons to play multiplayer. 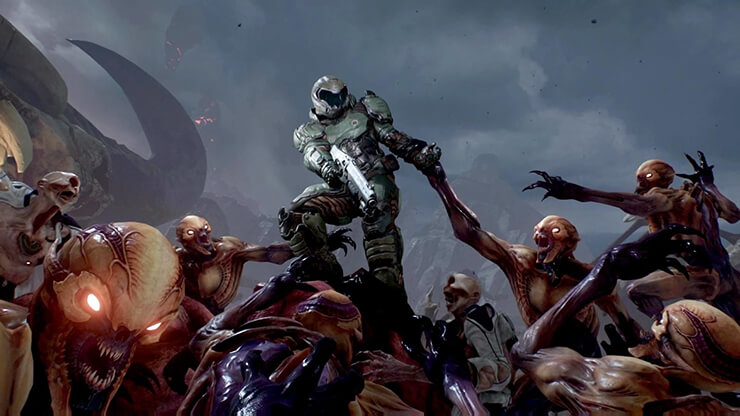 As for the multiplayer itself, it is an extremely fast-paced battle reminiscing the old Quake Arena and Unreal Tournament games, but with modern graphics. Maps are relatively small and made for quick and bloody encounters and you will find a fine number of deathmatch and other similar modes inside the game. And once you get bored by multiplayer you can play the best part of the game - a demon-slashing single-player campaign that will lead you to depths of Hell and beyond.

ARMS is another excellent multiplayer title from Nintendo and this time the Japanese company outdid themselves. The game is made to be enjoyed by everyone because it features a simple to learn gameplay that will take hundreds of hours to master, something like Rocket League of fighting games. The game features cute graphics along with many different arenas that all look unique and feature many details. Your fighters also look incredibly cool and you will love most of them.

ARMS is a multiplayer-only title and it features one-on-one battles between characters who feature arms capable to stretch to extreme proportions, something like the power of the Captain Fantastic. Battles can be button-smashing fests or slow tactical encounters, depending on yours and your opponent's experience in the game. While classic control scheme is supported, the game shines once you take Joy-Cons in your hands and utilize their motion control capability. The game offers online or local multiplayer modes and if you end up liking it, you will spend hundreds of hours playing it, for sure.

It's Rocket League, but on the Nintendo Switch. One of the best multiplayer games ever can now be played on the Switch and it is an excellent experience. The team behind the game did a phenomenal job, making the port smooth and fast while attaining more than solid looks. The game comes with lots of DLC cars included so you will have a huge choice when it comes to wheels.

This soccer but with cars game features simple gameplay that will take hundreds of hours to master. There is a huge number of moves and since most of them include flying with your car we advise newbies to spend some time in single-player mode and the practice arena because the game supports cross-play so when you decide to play multiplayer there will be millions of high skilled PC and Xbox One players to play against. 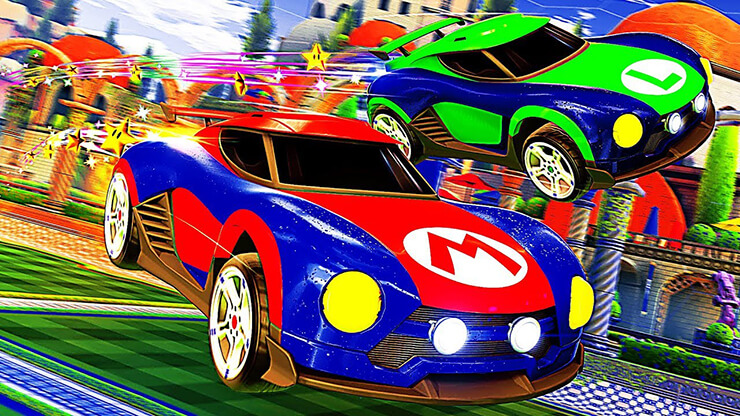 The game's single-player content puts you inside a team fighting for the Rocket League championship. Your teammates are bots and while they aren't really capable or smart they will defend and score goals because your opponents are also bots that aren't capable or smart. That's okay because you will want to play with bots at the start, at least until you learn to perform some advanced moves. Fortunately, if you want to play with real people but are thinking that your skill isn't high enough for online clashes, you can also play the game in local multiplayer modes.

The best one is a four-player split-screen mode (available only in docked mode) that allows you and up to three friends to play two-vs-two games (the best team sizes for competitive multiplayer) and learn the game together. The game supports two player split screen while in handheld mode and when connecting multiple consoles your party can grow to up to eight players. One of the best competitive experiences on any platform, and an extremely exciting game, Rocket League should be checked by every Switch owner.

Another classic FPS experience, but unlike Doom, Payday 2 is a co-op multiplayer game where you and up to three other people are put in a variety of scenarios that all include robbing a bank and successfully escaping the police. The Switch port works excellent, and while there are some drops here and there, the game works good enough most time. Also, Payday 2 for the Switch includes lots of content updates PC and other console versions have gotten over time, but not all.

Graphics are impressive (for a Switch game) and the action is magnificent. There are plenty of maps, keeping the game fresh and exciting for a long time. You can play as many different characters and there are also plenty of weapons to choose from, meaning that the game can adjust to different play styles. No matter which your favorite weapon is, there's plenty of solid choices. The game relies on coordination and communication so the lack of a proper voice support is a huge hit to the game's appeal, but you can play it with friends while using a third-party voice chat app on your smartphones, which is something.

Also, you and three friends can play the game in the same room, which is probably the best way to experience Payday 2 on the Switch. When played like that, the game shines because when communicating and coordinating your actions Payday 2 is one of the most exciting co-op shooters available today. Do note that there's no split screen support meaning that all four players have to own the game and to have their own console.

Yes, there are more exciting and better looking, and more modern multiplayer titles to choose from, even on the Switch but few of them can match the excitement and the adrenaline pumping of Tetris and Puyo Puyo, two classic games that are fused together in Puyo Puyo Tetris. Yes, both games can be played in this one, and it is up to you how you want to play them. Of course, there's a single player mode but it would be a huge shame if you skip its excellent multiplayer modes.

Puyo Puyo Tetris supports local split screen so you can have hundreds of hours of immense fun playing with friends. There are pure Tetris and Puyo Puyo modes, a mode that fuses two games together and even a mode that let you play both games simultaneously! We think that the last mode is a perfect party game, especially after everyone has a beer or two. The premise is simple for both games - once you achieve a combo, a block will be sent to your opponent, making their game harder and vice versa. This may sound subpar when it comes to the amount of excitement it can generate but if you played any of these two game in multiplayer you know how fun the action can get.

If you don't have anyone at your place and want for some multiplayer action, the game supports online lobbies for each of its game modes.

We all played Bomberman because the game (and its supplants) is available for practically every gaming system ever released. Its signature gameplay that includes destroying blocks with bombs while at the same time watching and trying to eliminate other players who are doing the same will stay relevant forever. Bomberman games always featured quality multiplayer because the quality of the action was superb no matter which version you play. And the latest Bomberman title to hit shelves is the Super Bomberman R, one of the launch titles for the Nintendo Switch. 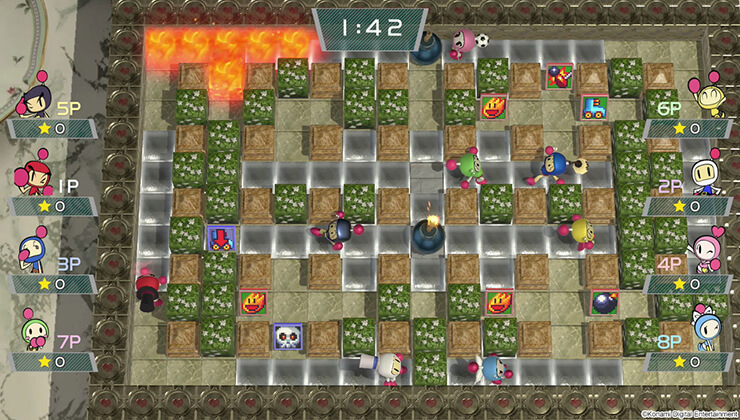 The game features a solid single-player campaign along with intense visuals and excellent sound effects. There are plenty of maps to play on, and multiplayer supports up to eight players guaranteeing tactical action that will just go south once eight different players are placed on the same map. Another great competitive multiplayer titles that support local multiplayer, Super Bomberman R can also be played online.