The Seven Totems: A Formula To Dominate Social Media Influence

Published in Affiliates on 9th March, 2017 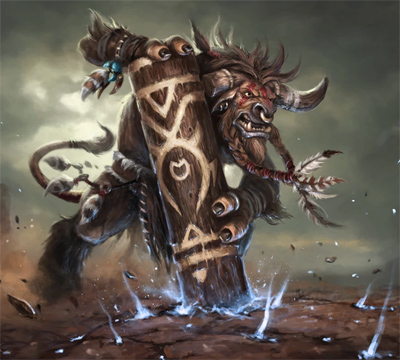 Over the years I've noticed a pattern in social media, that is ubiquitous, whenever an ordinary person manages to forge a successful social media career.

In almost all cases their rise to influence was supported by seven distinct totems, that underpinned the community they built around them.

A community needs to have something that everyone has in common.

This must be a belief so incredibly profound - at least from the group's perspective - that it that transcends all other variation in value systems within the group.

You will never be able to get all members of a community to agree on everything. But as long as you can all agree on at least one thing, then any dispute can be resolved by finding common ground.

Believing in something is great, but why is the community assembled in the first place? Ultimately an army needs a direction to march in, or it becomes restless.

You will need a mission that aligns with the community's core beliefs. This mission must for the genuine betterment of everyone, including those outside the community.

Did I mention we're assembling an army? Well, an army needs an enemy to fight, or it lacks any purpose to exist.

Most people believe they need to fight for their Core Beliefs.

Peace can feel great, but it's considered to be standing still by the majority. Therefore without an evil to fight, there can be no way to achieve the Mission: creating unbearable, rising tension within the group.

Starting regular wars is an important part of your job as a leader - just be sure they are wars you can actually win!

Communities have a prevailing culture that helps members of that community identify with each other. Within this a community also needs an etiquette for what behaviour is acceptable.

Such rules also helps to prevent conflict and tension within the group, by providing a clear set of safe behaviour for daily life.

Similarly to Etiquette, communities are bound together by language.

However, most communities don't have 1000 years to form an entire language. So instead they often they create catchy phrases that only the group uses. Usually these come from, or at least are used regularly by, the leader.

Perhaps the phrases "Lyin' Ted" and "Crooked Hillary", used to great effect recently in the 2016 General Election, will help illustrate exactly what a cultural vocabulary is.

No one can lead alone. A leader needs key supporters within the community who also carry influence. These also provide the community with a sense that the leader is not leading entirely by decree but, even if indirectly, through some sort of consensus.

And don't forget, as a leader, you're still capable of making mistakes. A hierarchy provides you with a council to help you make informed decisions.

The leader is the final piece of the puzzle. Their role is to keep all the Totems standing, and to arbitrate when the direction is not made clear in the Mission and Core Belief.

Although charisma plays a part, leadership is more about setting the example by doing. An effective leader personifies the values of the group and makes personal sacrifices that the group ordinarily does not make.

The community must perceive the leadership role as a burden, and not a privilege.

How Can I Monetize The Seven Totems?

Now that you've learned what the Seven Totems are, it's time to start monetizing them.

This can be done surprisingly quickly. In this practical example, I'm going to show you how to do it with Facebook Groups, but you can use almost any social media or publishing platform. 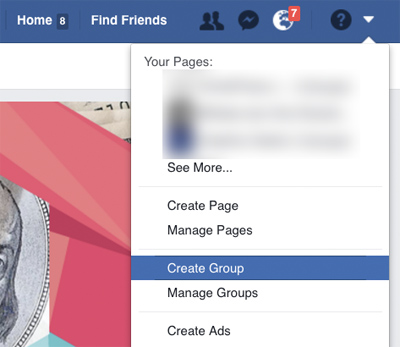 Personally I find it amazing that more people aren't doing this. I have Facebook groups that I started years ago and that now have tens of thousands of members.

Since starting them I've literally put in very little work apart from approving new members once every few days - which isn't hard because Facebook sends me reminders to do it anyway!

Oh, and did I mention that Facebook will allow you to create almost as many groups as you like? Just be sure not to create them all at once!

Did you ever notice how most people who become social media influencers, started out with a mission they actually cared about? Money didn't fully come into the equation, until much later.

As a leader it's incredibly hard to hold up totems you don't genuinely believe in. Therefore the first thing you'll need to do is choose a Core Value and a Mission that you personally believe in, and can extol with confidence.

However, if you're aware of this problem, you can choose core beliefs that can possibly overlap with profitable niches. In this example, here's what I'm going to choose:

The internet brings a huge opportunity for equal rights. Mothers, or fathers, should have the right to choose to care for their children at home, while earning some extra income for the family online.

We're bringing together as much knowledge as possible, to help work-from-home moms achieve their dream of earning an online income.

We can advertise these beliefs all over our Facebook Group - in the Title, Description, Banner and in a Pinned Post, which will stay at the top of the Facebook group forever: 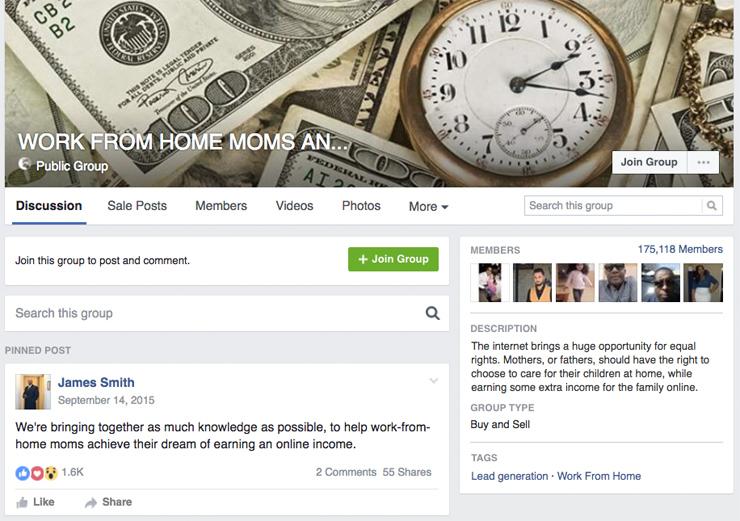 In this case we have an obvious, huge evil that is ready and waiting for us:

Scam sites that deceive work-from-home mothers and do not pay out the money promised.

PLEASE POST TO WARN ABOUT ANY SCAM SITES THAT YOU FIND!

As you can see, we've chosen a war we can win.

Not only will we be genuinely helping people, but scam sites are so commonplace that the Facebook Group itself is going to become incredibly active!

We can add this declaration of war to our Pinned Post: 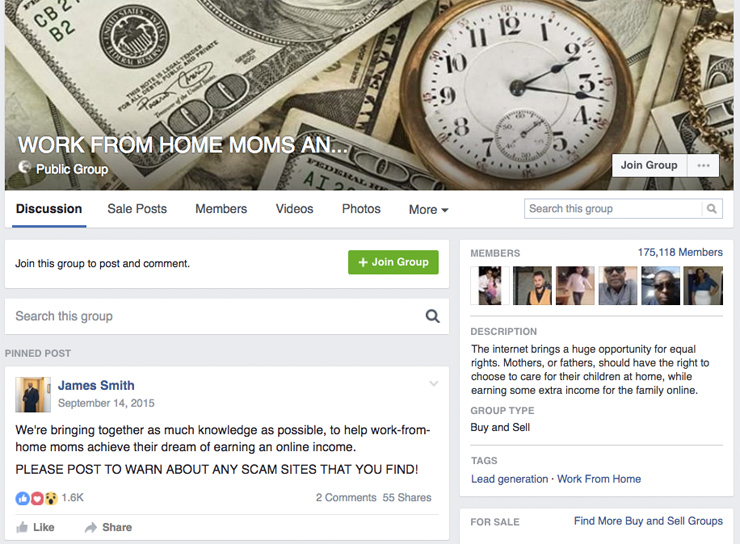 Etiquette is actually very useful, because it allows you to divert the energy of the group into productive endeavours. In this case we're going to use it to establish a consensus about which sites are the best to earn money online:

Here's our list of tried and tested sites that have proven themselves to work:

Notice how we used a referral link here. Members of the community won't mind clicking on these referral links because they are seen to serve the greater good. Let's add these to our Pinned Post as well: 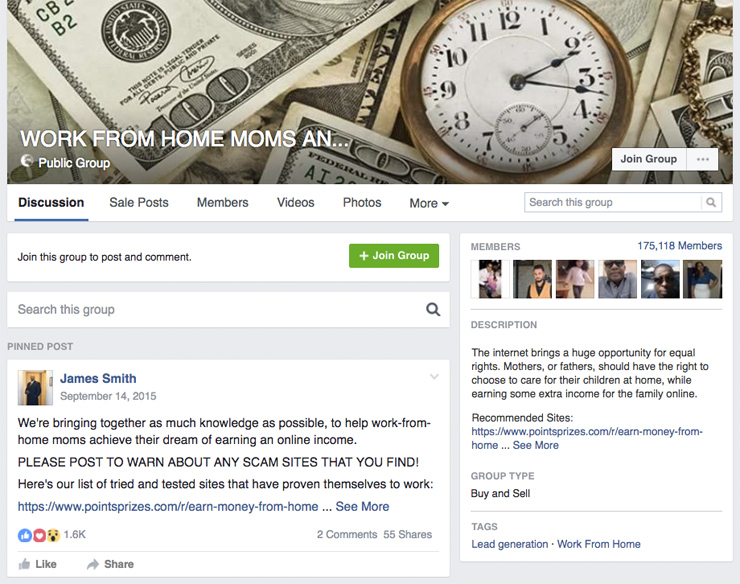 Please note that this isn't the end of our work. We're promising to collect knowledge, so we need to follow through with this promise as well.

Do some research and write some detailed articles that give back value to the community, as a thank you for clicking your referral link. Add those to your pinned post too, to encourage more people to share it.

Step 5 - Evolving The Other Totems

Not all of the Totems can be established immediately. It would feel artificial to do so.

The ones that relate to culture and leadership can only be evolved over time. Be a steadfast leader to your community and you'll naturally develop these other Totems!

It's very easy for anyone to start growing their social media influence in their spare time. Especially using easy platforms like Facebook Groups.

It might be slow to take off at first, but if you keep the Seven Totems in mind, eventually you'll have a massive niche social media inflence that you can monetize with referral programs - while giving back to the community at the same time!