Published in Lifestyle and Viral on 7th June, 2018

ASMR stands for Autonomous Sensory Meridian Response - although those who have experienced it might call it the brain orgasm!

It's a very pleasant tingly sensation, which many people experience as a reaction to certain visual or audiatory stimuli. However, it's entirely non-sexual in nature and can be experienced by people of all ages. 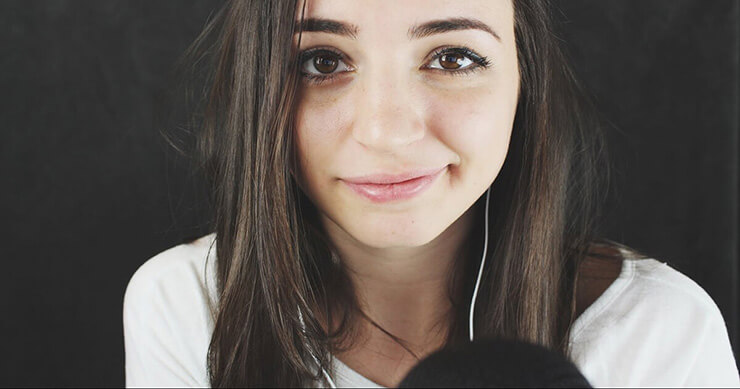 For those of you who have the ability to experience ASMR, you're in for a huge treat. Read all the way to the bottom, for our 10 favorite ASMRtists on YouTube right now!

People describe ASMR as a braingasm, and that's certainly no exageration. Generally it starts at the back of the neck, or in the scalp, then it spreads down the spine and diffuses into the nervous system as a wave of pleasure. This pleasurable feeling is affectionately known, as the tingles. Afterwards you'll be left in an extremely calm state, just like a deep meditation.

Most people who can experience ASMR will probably have triggered it by accident, during childhood. The first time I experienced it was when my teacher gently touched the top of my head, while counting all the pupils in our classroom. I would have been about 8 years old at the time - I still remember my hair sticking up and a very strange tingly feeling down the back of my neck.

Other typical scenarios for accidental triggers are hair salons, listening to someone with a soft voice or watching someone quietly manipulating an object, such as unscrewing a makeup container.

Triggering intense tingles takes practice and is very similar to meditation in some ways. It's easiest to experience ASMR if you're lying down alone, without any loud noises going on around you. A bit like sensory deprivation, except for whatever ASMR video you're listening to. Certainly, even with the experience I have, I still couldn't trigger it in a crowded room or a loud environment like a train station.

ASMR artists create thousands of different videos to intentionally trigger the tingles in different people. Every person is unique and therefore gets triggered by different types of sounds or visual stimuli, such as tapping, scratching, whispering or eating sounds and much, much more.

Most ASMR is created using a binaural microphone. These special mics pick up sound from two different angles - slightly spaced apart - just like your real ears.

When you listen to binaural ASMR, with a set of good quality headphones, it creates a 3D sound effect, which greatly enhances the amount of tingles you can experience. You'll frequently see an ASMRtist switching from side to side with their sounds in order to take advantage of this phenomenon.

There are basically three different types of ASMR videos:

Typically each ASMR video will cater to a certain trigger, or group of related triggers, since every person experiences ASMR in different ways.

Some common divides in the community include people who like soft talking in videos and those who perfer just to focus on the sounds, finding talking distracting. Others find inaudiable whispering triggers their ASMR, while voices they can understand do not.

Some People Don't Get ASMR

Sadly there are some people who simply don't experience ASMR and therefore don't understand what all the huge fuss is about. They might feel generally relaxed when listening to an ASMR video, but do not experience that rewarding tingly sensation.

Others can experience an extreme adversion to certain sounds, just like many people cringe when they hear blackboard scratching, or the concept of ASMR videos in general. A tiny minority may even suffer from Misophonia, also known as sound-rage, and can even hate the proliferation of ASMR on YouTube.

Physical And Emotional Benefits of ASMR

There are numerous benefits to ASMR and professionals are increasingly recommending that people try it out. It's often perceived that, just like meditation, there's simply no harm in trying it out. You may find ASMR to be a powerful, drug-free assistance if you suffer from:

ASMR stimulates the body's natural release of Oxytocin, also known as the love and bonding hormone. It's associated with feelings of closeness and intimacy, while not being sexual in any way. For example, you might experience a similar Oxytocin release when you cuddle up with your dog.

Perhaps this peer bonding experience is why many ASMR channels have such a hugely loyal fanbase. This video format inevitably forms an unusal closeness between the viewer and the ASMRtist. Furthermore, the creators of ASMR tend to be exceptionally caring, empathic individuals.

Sadly ASMR, just like all human bonding, can ocassionally become tragically painful too. Despite it's numerous beneficial effects, ASMR will never be a panacea for everyone's problems in life. It may help some individuals a lot, but it is not an alternative to professional care or medical treatment - needed for those suffering from the most severe issues.

This is an important question, and one which needs to be asked, expecially since there are now almost 14 million ASMR videos on YouTube.

For those who experience ASMR, there is a limit to how much Oxytocin the human body can release within a given period of time. The hormone gives a general feeling of extreme wellbeing, without producing the type of high you would expect from a drug. You also cannot experience a withdrawl from it. Therefore ASMR does not result in addiction in the traditional sense.

Additionally, most ASMR viewers lose their ability to experience the tingles if they watch too many ASMR videos. This forces them to take a break of between a day to several days before watching them again. So if there is any addictive aspect to ASMR, it's self-regulating and does not interfere with a person's normal lifestyle.

However, despite the limits of ASMR there are always some people who still crave more tingles. This has created a somewhat entertaining genre of ASMR videos, designed specifically to try and bring people's tingles back more quickly. If you're watching these videos repeatedly, and still not getting the tingles, then you should probably give up and take a break!

ASMR works differently for different people. What triggers a good and tingly feeling in some can trigger nothing, or even worse - negative feelings in others. Everyone has a different trigger; you just need to find yours. Some of the most popular and most searched ASMR triggers include:

Here a list of the most tingly ASMR artists on YouTube, including some of my personal favorites, that will help you maximize your tingles.

FrivilousFox is well known for her gentle demeanour as well as the quality of her trigger-heavy videos. She's also a fantastic singer, so will sing and tap you to sleep.

Can you imagine having both your ears licked at once? Well, through the magic of a 3Dio Binaural Microphone, and two very Frivolous Foxes, you can now find out:

Gibi has watched a lot of ASMR videos that she first discovered by accident, and she realized that specific movements, visuals and sounds made her feel relaxed and calm.

She saw the potential of the ASMR community to grow into something big, and decided that she would like to be a part of it as well.

She has a variety of videos, including roleplays, cosplay, makeup videos, and a lot of her own original characters.

ASMR Darling is a very popular asmrtist. She mostly makes videos that are intended to help you sleep better, relax, focus and feel the sensational tingly ASMR feeling. Her channel even features whispered gameplay videos, like the one she added recently, where she played Fortnite as relaxing as possible, which a lot of people enjoyed.

This channel will be your secret island of peace and relaxation. You'll feel comforted, loved and cared for when watching her relaxing and stress-free soothing videos. You'll be in good company during those rough nights or hard times, and if you let her, she'll help you find peace and beauty in places you could have never dreamed of searching for.

Caroline is one of my personal favorites. She does a lot of no speaking videos with a wide assortment of triggers. She's also well known for her ASMR live stream which loops through her best moments 24 hours a day.

Ally was one of the earliest ASMRtists to start making videos. She has a very unique soft voice which many people like and does some epic roleplays and casual chatting videos. Sadly she doesn't post videos as often as she used to, but we're hoping she will keep making more!

Tingle seekers are always welcome on Heather Feather's channel. She's aware that for some people out there, sleep can be a daily battle. She's here to help you in your battles, or even fight them for you, and help you fall asleep a lot easier. Drift to sleep with the help of Heather's gentle tingle videos.

Her videos range from role plays, to original stories, guided meditations, sound assortments, pure sounds, and much more. She does a lot of experimenting and doesn't believe in setting creative boundaries especially when it comes to ASMR.

Olivia's comes accross as a very caring person and you can feel the warmth coming through in all of her videos. Many find her accent is surprisingly tingly for many people and she does some fantastic videos, with lots of layered inaudiable sounds and inventive triggers.

Personally I love the variety you'll find on Kayla's ASMR channel. You'll find everything from roleplays to layered sounds and specific trigger videos. No matter what you're looking for you're sure to find something that will give you the tingles.

Yes, there are also some male ASMRtists too, with more starting every day. His name is Dmitri, and he has over 700 videos of massages, tapping sounds, role plays, no talking videos and a lot more.

He's very passionate about ASMR, and he pours all that passion into the ASMR videos that he posts on his channel.

Here are some alternatives to ASMR, for those who don't get it, or simply aren't fans: