Published in Entertainment on 12th June, 2018

People often forget that anime isn't just another type of genre that you can watch. Above all, anime is simply put - art. All you need to do is watch an episode or two and it will become evident to you as well.

Anime characters are done spectacularly well. Anime girls are drawn quite powerful, strong and beautiful, and it's no wonder that so many fans, including men and women obsess over them. They are infatuated with their beauty, their strength, determination and self-confidence, and make everyone aspire to be like them.

A lot of girls feel so empowered by the list of women I'll share with you today that they are quite a popular choice when it comes to cosplay. Some fans spend tons of money on costumes and merchandise for their collection of the most inspiring and beautiful anime girls. Others even go as far to call these characters their "waifu", that's how strong their feelings are about them, and once you get to know a little bit more about these powerful and beautiful women you'll see what makes each and every one of them so special.

It's really hard to say which anime characters are the most beautiful, as beauty can't really be clearly defined, and a lot of people see beauty in different things. For me beauty isn't proportions, hair, looks and so on, it's the strength and power that this women have, and their determination in what they're doing that makes them each more beautiful than the last, so buckle up and be ready to be mesmerized.

Erza Scarlet is one of the main female protagonists in the anime/manga series called Fairy Tail. According to fans she's both the strongest and sexiest mage of the whole Fairy Tail universe. Even though Erza isn't what you call a "feminine" woman, it's her assertive nature that makes her so irresistibly beautiful.

Erza Scarlet is not just a beautiful girl, she's also unbelievably strong both physically and mentally, has a beautiful long red hair and an extraordinary charisma. It's no surprise that most anime fans say that she's the most desired waifu. 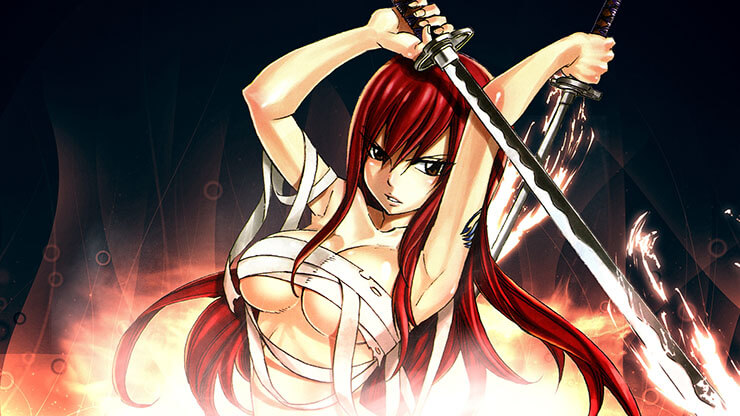 She is quite a strict person, as she often criticizes the poor habits and behavior of the other members of the guild, makes them apologize for it, which they immediately do, out of fear that they might experience her wrath. One more interesting side of Erza is that she's a huge food maniac and she loves eating cakes.

We can all take a page from Erza's book, as she proves that self-confidence and determination trumps fear in every possible way.

Mikasa is one of the two main characters in Attack on Titan. She lost her parents at a very young age, was rescued by her best friend and taken in by his parents.

She chose to accompany Eren in the military in hopes to make a change and bring some peace to the world she lives in. She was one of the best soldiers among the training corps if not the best!

Later on she decided to follow Eren yet again. This time she enlisted in the Survey Corps, so that she can always be there to protect him and keep an eye on him. 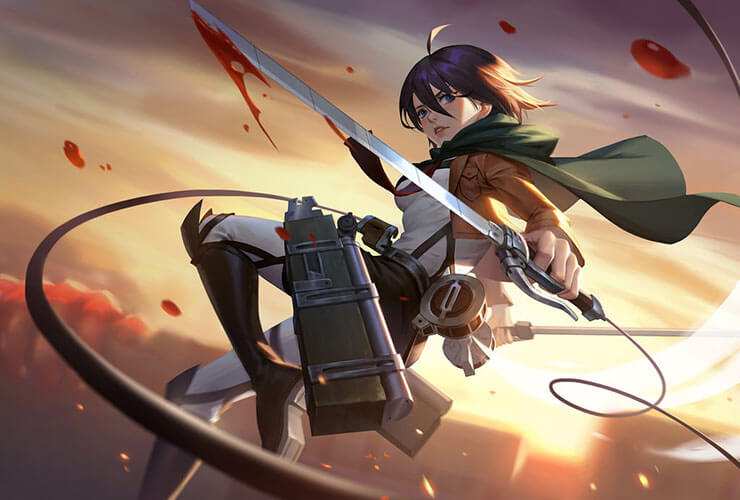 Mikasa has quite a unique personality; she's very well rounded and an extremely talented fighter.

She is a tall, muscular and fierce teenager. She has an extremely toned and strong body with muscles throughout her abs, legs and arms.

She has a very cynical look at life, and tends to be quite serious and withdrawn. Nonetheless, she has deep care and love for her friends, and she's always there for them no matter what kind of situation they find themselves into, which is what makes her the most beautiful character in the anime.

Akame is by far the most likeable girl of all the anime girls. She's got a very calm and yet strong and impressive personality.

Akame of the Demon Sword Murasame as she's also known, is one of the most powerful and loyal assassins in the Night Raid. She's also the most wanted person in the area for crimes that she didn't even commit. Her skilled and fast hand-to-hand combat has helped her dodge a lot of dangerous attacks. Akame's powerful relic - the teigu - makes her the most feared and deadliest woman in the entire land. 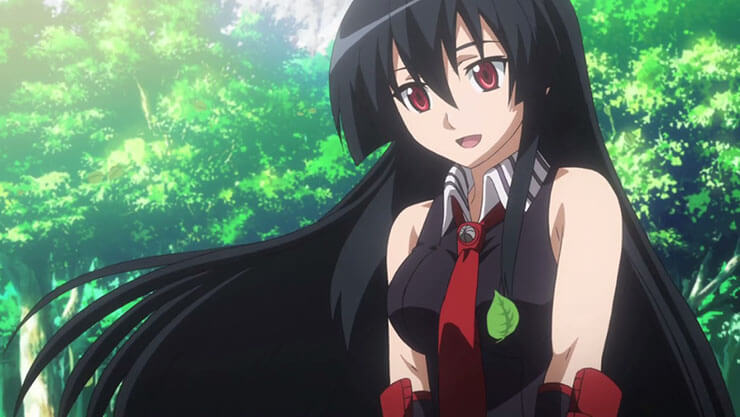 Below the tough exterior she hides a soft and caring personality and she always worries about her friends and comrades. She's experienced the darkness and the risks of hand-to-hand battle enough times to know that it can be very dangerous and unpredictable.

She seems cold and indifferent and doesn't let her emotions take over when she loses a comrade or a close friend. This made Tatsumi mistakenly assume that it's easy for her to deal with loss since she's already used to seeing it. However, he couldn't be further from the truth, something which he realized soon enough as he saw her break into tears over a friend of theirs, saying that it's always hard for her to deal with the loss of a friend, as it is the worst thing a person can experience.

Asuna is Kirito's partner in the Sword Art Online series and a true heroine. She is a very kind and helpful woman who doesn't think twice before she risks her life to save another person in trouble.

Talking about cute anime girl... Asuna has beautiful hazel eyes and a long orange hair. Asuna is quite similar to Lucy Heartfilia. They both come from a rich family and have problems with one of their parents. Nonetheless, both of them are quite kind, warm and friendly young women. 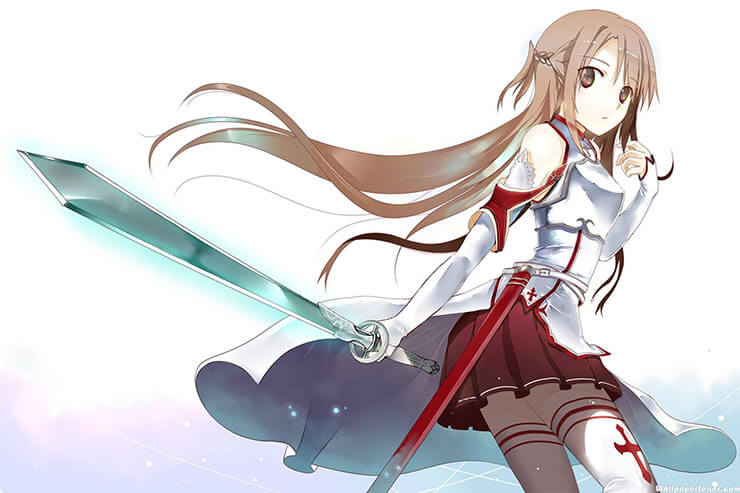 Asuna always stays true to herself, and that's perfectly depicted in one of her most famous quotes:

I'd rather stay myself until the very end than sit and rot away at an inn, back in the first town. Even if I get killed by a monster, I don't want to lose to this game... to this world... no matter what.
Asuna Yuuki

She was also ranked in the top 10 female characters in the Kono Light Novel ga Sugoi 2013 rankings.

Hinata always speaks to others in an appropriate and serene manner. She is very kind, shy, thoughtful, polite and incredibly gentle. Her kind, loving and gentle nature often ends up getting in the way of her abilities. Nonetheless, she's quite strong and intelligent despite being timid and shy.

She tries to keep her emotions checked and tries not to let them take over during missions and pull her down. Hinata has had a lot of reasons to become angry and bitter, but instead she chose to be a selfless and kind person and always works on improving herself. 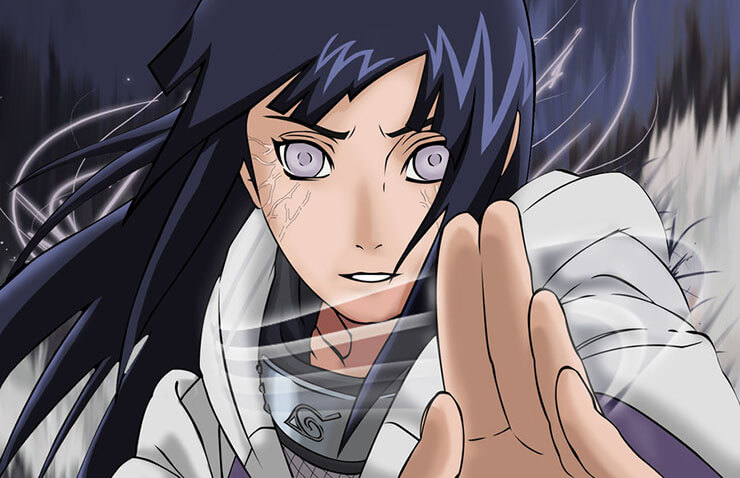 She is a loyal and loving friend and she's proved multiple times that she is able to step out of her comfort zone when necessary. She is quite a fierce, kind-hearted and gentle person.

Hinata has a beautiful dark blue hair, fearless white eyes with tingles of lavender, and a beautifully shaped figure.

Have you ever heard of this cute anime girl who's also known as the Demon, or Majin? Mirajane Strauss is her name. She is an S-Class Mage and a part of the Fairy Tail Guild. She's also a very beautiful, slim, young woman who often poses as a model for the Sorcerer Magazine.

She has long, white hair with a very distinctive hairstyle. Her hair reaches down to her chest and she has a small ponytail to keep her bangs from covering her face.

As I mentioned before, Mirajane was known as "The Demon" in her younger years. People used to fear her a lot and she used to be infamous among criminals and other guilds. Now, she has a very caring and loving personality and treats everyone, including strangers, with kindness.

Mirajane takes care of everyone in the guild, and although she might seem super cute and friendly, she can surprise everyone by turning into a literal demon when things start to get real, especially if her friends are in danger.

Touka Kirishima is one of the main protagonists in Tokyo Ghoul. She's a ghoul and a waitress and basically leads a double life with a ghoul and human identity.

She has a bit of a rash attitude that basically comes from leaving a "hard-working" double-life. As a human, she is a regular school girl working as a cafe waitress and socializing with her normal friends. 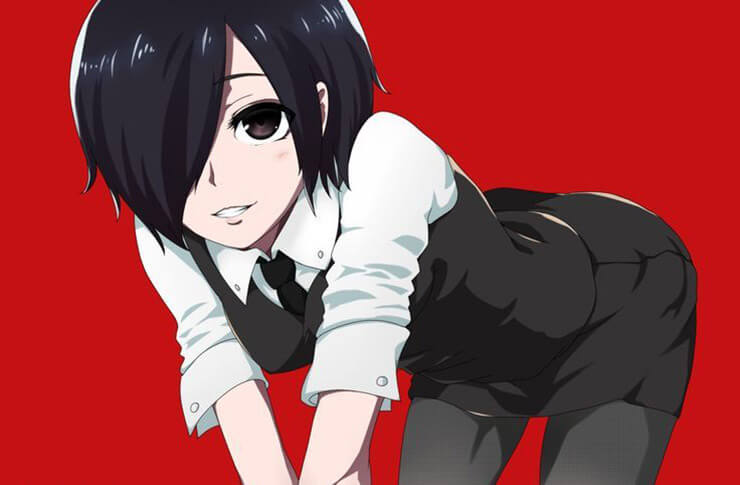 As a ghoul, she is a bit more ruthless and reckless and reveals a lot of hatred towards CCG's investigators. Although she's seen as shy and modest when she's around people, especially in public, when she opens up, she lets tons of emotions flow right out of her.

What makes Touka sweet and beautiful is her gentle and warm personality especially when you compare it to how she was before. She is an overprotective and kind-hearted, beautiful young woman who loves her friends and would do anything for them.

C.C. is one of the main protagonists in Code Geass: Lelouch of the Rebellion. Her real name is never reviled, and what C.C. actually implies is that she either abandoned her real name or has forgotten it.

C.C. is one of the most beautiful anime girls, with golden eyes, a long green hair, and a huge love of pizza. C.C. has a lot of different outfits and she wears a variety of different clothes which depend on the situation. 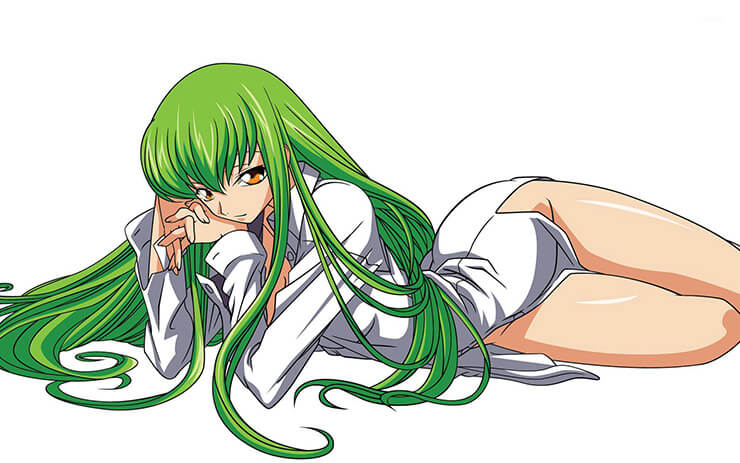 She doesn't really express a lot of emotions and tends to behave apathetically towards people. However, that does change a bit at the end of the first season and several times in the second season as she starts to show a bit of emotion when she finds herself in the presence of Lelouch.

Her serious and apathetic behavior might be caused by her loneliness and the fact that she doesn't really have a family or a place she can call home. We can't be absolutely sure if she's lonely at all, but even if she is, she hides all of her emotions pretty well and doesn't really want to let others know about it.

Here are some words of wisdom from the "pizza girl":

In this world, evil can arise from the best of intentions. And there is good which can come from evil intentions.
"pizza girl"

Fake tears can harm others, while a fake smile only harms oneself.
"pizza girl"