Published in Entertainment on 14th June, 2018

Will Smith has done almost anything starting from raping, to acting, producing, and even songwriting. He's been called "the most powerful actor in Hollywood" and for a good reason.

He's had many powerful and though-provoking roles over the years which made my chose of top 10 of his best movies and TV series a very hard one.

Today's list features his best and most successful roles that will make you want to get a few days off from school or work and do a Will Smith marathon instead.

With one of the best opening theme songs of all time, The Fresh Prince of Bel-Air aired in 1990 and folks couldn't get enough of it.

Starting a lot of fashion trends and pop culture trends, the show became a cultural phenomenon and its popularity only continued to grow.

The TV series features Will Smith who plays a street-smart teen from Philadelphia that ran into some trouble back home and his mother decided to send him to live with his aunt and uncle in a wealthy neighborhood in LA, called Bel-Air.

Back then Will Smith was known as just a rapper, but soon enough he began to win the hearts of his viewers as everybody got to see how talented and funny he actually was.

The series followed Will's journey from the rough streets of Philadelphia to one of the wealthiest neighborhoods in LA.

Will Smith plays a fictionalized version of himself, and his working-class background often clashes with his upper-class family in Bel-Air.

The show was known for its catchy theme song, family-friendly comedy and while it's mainly loved for its comedic charm it also covers some sensitive and important social issues, including racial identity, gambling and drug addiction and it does so quite earnestly.

I, Robot is a science fiction movie set in 2035, starring Will Smith in the role of a robot-hating cop assigned to work on a murder investigation where the main suspect is a humanoid robot.

The story of the movie is inspired by Isaac Asimov's short series of the same name. The movie is set in the future where robots have advanced a lot and humans have become dependent of them in every way.

Although robots are programmed to serve humans and do no harm to them, some suspicions have risen around a scientist's death, and Del Spooner, who's played by Will Smith, is assigned to the murder case.

Bad Boys is a police action comedy movie starring Will Smith and Martin Lawrence as Narcotics Detectives in Miami, Florida.

They're working on a case of stolen heroin from a vault in the police station. They need to recover the $100 million worth of heroin in 5 days, or Internal Affairs might shut down their department.

They're working on the case with the help of 2 informants: Lowrey's ex-girlfriend and her best friend Julie Mott, played by Tea Leoni. They quickly team up with Julie, after she becomes the sole witness to a murder and they need to protect her.

The plot gets more and more complicated from here on, as our two main protagonists are forced to impersonate one another and take over each other's lives.

The story revolves around a group of people who get together in the Nevada desert to launch a counter-attack after an extraterrestrial invasion.

The alien attack began on the second of July using energy weapons that managed to kill millions of people in all major cities in the world.

International leaders began to orchestrate numerous individual counter-attacks that all proved to be unsuccessful.

This forced the last survivors, along with the US President, a jet pilot and a computer genius who had predicted the event, to become scrappy and join their forces in an attempt to devise a way to take down the aliens using untraditional ways of combat.

Ali is a biographical movie that focuses on the life and career of the famous American boxer Muhammad Ali, including his ups and downs and all the controversies.

Smith trained and prepared himself for a year before the movie, and really bulked up for the role. His commitment to the role was remarkable, as he trained both inside and outside the ring to get ready. He took all kinds of lessons, including dialect coaching and Islamic studies.

Smith's preparation and dedication worked off very well in the end. He got a best actor Oscar nomination, and lots of praise and good reviews.

5. Enemy of the State

Enemy of the State is a conspiracy-thriller movie that focuses on a group of NSA agents and their conspiracy to kill a Congressman and then cover up his murder.

The movie was very well received and Will Smith and his co-star Gene Hackman received a lot of praise for their on-screen chemistry.

Will Smith plays a hot shot lawyer that stumbles across the NSA scandal and is now pursued by those same people, who try to frame him and turn his life upside down.

I am Legend is a post-apocalyptical sci-fi movie set in New York, after a government-made vaccine becomes lethal and either kills those who are infected or turns them into vampire-like creatures. 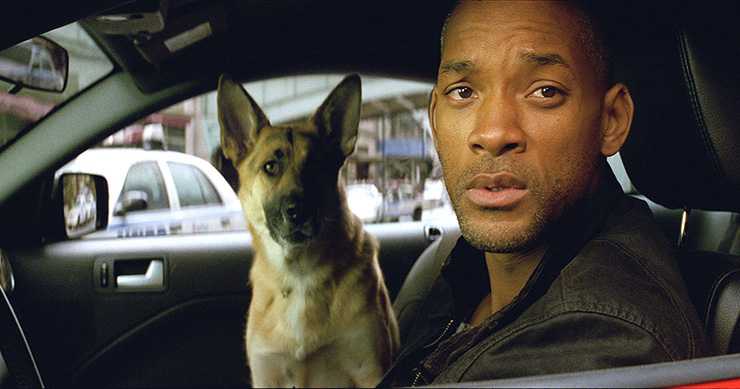 Will Smith plays a virologist who lives alone in deserted New York, as he's the only survival left on the island of Manhattan, along with his loyal dog. Samantha is a German Shepherd who was given to him by his daughter, as she was getting on an evacuation helicopter with her mom.

He lives an isolated life with Sam, and works on developing a cure for the virus, while he waits for possible survivors to answer his radio broadcasted recording and come to the meet up spot.

Will Smith plays a con-artist who tricks a wealthy family into taking him in by convincing them that he's the son of Sidney Poitier and a friend of their kids.

The story is based on a real-life con artist by the name of David Hamilton, and although the movie didn't become wildly successful it did earn a lot of praise and one Oscar nomination.

It's Smith's impressive acting performance that made the movie what it is, and showed Smith's versatility as an actor.

2. The Pursuit of Happyness

The Pursuit of Happyness is based on a real-life story about a man who attempts to escape poverty and make a better life for himself and his son by becoming a broker. He spends a year being homeless with his son while he takes an internship position at a brokerage firm.

Will Smith shares the screen with his son Jaden Smith, as they deliver a heartbreaking yet inspiring story about what it's like to be poor, homeless and trying to stay fed and alive while feeling the constant pressure of having absolutely nothing in this world.

Men in Black is a sci-fi action comedy adapted from the comic books of the same name. The movie features Will Smith and Tommy Lee Jones who work as agents of a top secret organization known as the Men in Black. Their job is to supervise extraterrestrials that live on our Planet and hide them from the humans.

The movie has received tons of positive criticism for its witty humor, as well as the outstanding performances of the two main actors. The movie also got nominated for three Oscars and won one for best makeup.

It was so successful that it lead to two sequels, and an animated series.