The Birth Of The First Titan

Taking in consideration that DotA initially started as a custom Warcraft 3 map, at the time no different than the hundreds of all the other custom maps available on the Battlenet client, custom made by the modding community (albeit still being one of the more popular even at the time, being on pair with Footmen Frenzy, Vampirism, Kodo Tag and such), it sure has came a long way.

Initially inspired by the failed MOBA attempt of Starcraft 1 with its AOE aka Aeon of Strife custom map, the idea was transferred to the Warcraft 3 engine and with the support of the modding community and the tools which initially Blizzard, the company which made Warcraft 3 (and all of its predecessors) provided on pair with sites such as EpicWar and TheHiveWorkshop who helped people exchange ideas, help each other and spread their custom maps, the first version of DotA was born.

As the interest for the competitive RTS (Real Time Strategy) aspect of Warcraft 3 was fading, which was the initial goal of the game after all, Blizzard soon started to slowly abandon whatever support there was for the Battlenet client and went off to create and eventually release the greatest MMORPG (Massive Multiplayer Online Role Playing Game) ever made, called WoW (World of Warcraft). 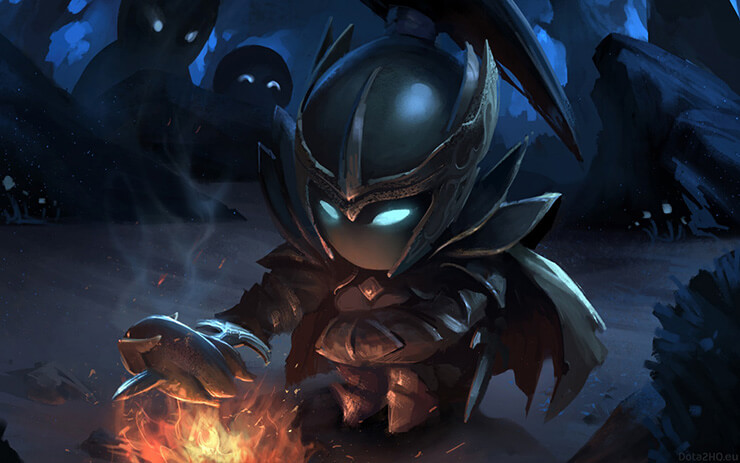 While Warcraft 3 was a huge success, both in the number of copies it sold and in the amount of gaming equipment it brought with it at the competitive gaming scene, the graphical appeal of Warcraft 3 soon began to fade.

As its graphical appeal began to fade, even though players were still interested in playing the game (of which some still are even today, 16 years after Warcraft 3: Reign of Chaos was released with even decent tournaments present both in viewership and in prize pools), the other aspects which Warcraft 3 brought with it were slowly fading.

The retired Danish professional Warcraft 3 player Grubby (aka Emanuel Schenkhuizen), who now streams high-end Warcraft 3 content on the TwitchTV gaming platform has personally said that the reason Blizzard stopped supporting the game was not that the game was bad or unsuccessful, but because the things which it brought with it started to dissipate.

As a retired professional and an undying Blizzard fan, it's normal that he wouldn't say it out loud; but he did imply that there were more things behind the scene than just keeping the game alive.

After all, Warcraft 3 could have been remastered at any point if it suited Blizzard's interests.

But Apparently That Wasn't The Fact. So, What Was It Then?

Warcraft 3, besides selling copies of itself (both physical and digital), it was also made to incentivize people to buy better, more graphically powerful and ultimately, more expensive computers so they can play and perhaps even aspire to become professional gamers.

The tournament scene also required a lot of accommodation, travel and prize pool fees which Blizzard covered by having a share of the amount which the professional gaming equipment industry was making, selling professional gaming chairs, headsets, special monitors and so forth.

So as soon as Warcraft 3 wasn't able to fulfill these "background functions", the desire for Blizzard to revitalize the game died.

As previously mentioned, Blizzard eventually focused on World of Warcraft which not only you needed to buy to get but also needed to pay a monthly fee to continue playing. Such being the case, WoW was much more economically aspiring for Blizzard and that's the reason why Vanilla WoW was supported and in a way updated by a multitude of expansions (and with no sight of an end even as of now) while Warcraft 3 never got a sequel and we're not sure if we're even getting one. 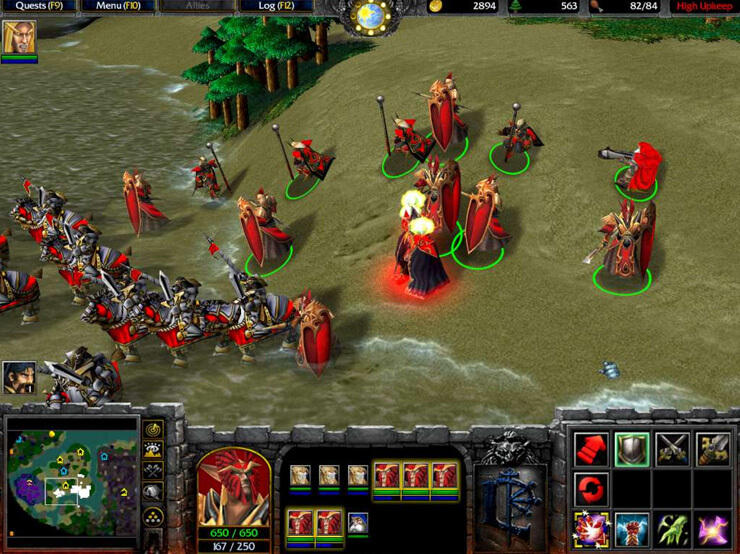 At one point the support for the Battlenet platform on which all, custom and non custom (ranked and skirmish) Warcraft 3 maps were played got so bad (borderline non existent) while DotA was achieving an unmatched popularity for a custom game map/gamemode at that time, it recognized the need to move to a new platform.

As such, DotA and Steam made an agreement and Steam became the new, official platform for DotA which also got a total graphical and sound effects overhaul but kept all the existing heroes and mechanics, eventually renaming itself to DotA2.

Having Steam as its new platform which gave all the software support it needed, provided with constant client updates, balance changes, new hero additions and so forth, the popularity of DotA2 rose so high that eventually it became what it is now, the original synonym for a MOBA. Even before the term MOBA was a thing and was even recognized as a game genre, people called all other MOBA's "DotA2 alternatives, or even flat out DotA2 copies".

So, taking all of this in retrospect, what were the actual things that made DotA2 the first of its kind to succeed on a massive scale, the "First Titan" that arose to serve both as a vanguard and as an exemplar to all others of its kind that followed, regardless of how close or far they came or even are at the moment when compared to the popularity of DotA2?

Well, even though the full story might take 10 000 years to explain (I hope you get that Warcraft 3 reference), when it comes to me, I have a very few but highly specific things in mind that I think truly captivate the key factors that made DotA2 what it is.

People who played the original DotA Warcraft 3 custom game map, naturally come from Warcraft 3's RTS intended gameplay. While in Warcraft 3 you play an RTS game where you need to gather resources, build up a base and manage population before you get to the sweet taste of battle, to some people the whole first part of "in-game economics management" really wasn't appealing and was looked upon much more like a chore than an actual game mechanic.

Naturally, when you don't like to do something, you tend to not be really good at it. So for people who lived solely for the fight, even if they'd manage to build up an army, they would often get destroyed by the opponent who did a better eco and base management and just made the bigger army. This was highly unappealing.

For those who treated the eco-management part of the game as equally important as the battle, even if you did manage to get into a battle with a sizeable army that would rival that of your opponent's, in Warcraft 3 the units and even some of the heroes (intelligence based support heroes) aren't that powerful (at least, not in the conventional sense).

There are no big numbers, no huge hits of damage, no big swings or anything like it; it's more like a war of attrition between two armies who excel at weakening each other instead of making themselves more powerful, which in retrospect further made the overall power level of the game even lower (human sorcs slow, witch doctors stasis traps, banshee curse etc).

So DotA had a great idea; instead of controlling 20 or 30 weak units at once, why not focus all your micro skills and mechanical execution capabilities on one unit (hero) but with EXCEPTIONAL POWER? 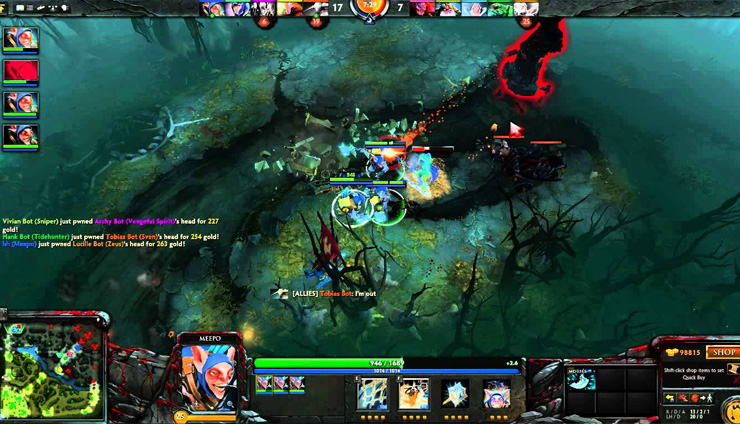 From managing sorc's target for slow, banshee's target for curse, druid of the talon's target for faerie fire and so forth, with all of these units squishy to the point that they'd die in two hero spells or three strong melee unit or hero auto attacks, why not manage ONE hero who had four abilities (one ultimate, following the same base hero concept of Warcraft 3) but with the power level of the heroes raised up to the stratosphere?

On top of everything, why not allow the heroes to purchase items which would even more flat out boost their attributes, integrate new mechanics to the game (buying Crystalys in DotA 2 allows you to have a 20% chance to critically strike an opponent for 175% normal damage), allow for interesting combos (buying Blink Dagger or Force Staff on Earth Shaker can make your game winning ultimates spotlight worthy due to your newly found mobility), allow for fun and interesting lane hero combinations (having Sven and Vengeful Spirit in one lane who both have an on target spell stun can make some very funny skirmishes) and just expand the game to a whole new dimension. Instead of attack moving an army, now you have a one man army to play around with, equipped with limitless possibilities for potential.

While Warcraft 3 had interesting items that dropped from neutral creeps on any skirmish map (the more powerful the monster, the better the item), the items were rather limited and as the meta stabilized and the pro scene became dominant, many maps who had "imbalanced items" were flat out removed from the competitive map pool. While getting a mantle of intelligence was great on the human Archmage and slippers of agility was great for the orc Blademaster, the vice versa was, well, not so great.

And the problem only got worse from creeping high-end creeps that dropped items like Scourge Bone Chimes that gives your melee units 10% lifesteal which is godlike if you're a melee orc army but useless if you're an elf with archers, huntresses, and talons, and vice versa with getting a Flute of Accuracy which gives all ranged units +10% damage being great for elf, but just a 200 gold bonus when sold for orc sadly. 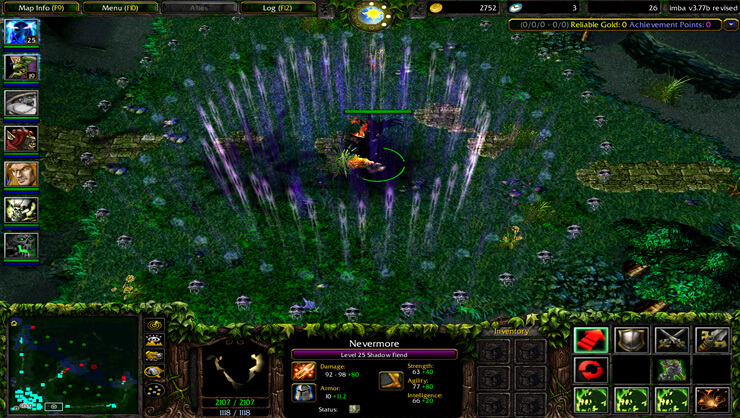 The creeps on a map were limited and highly contested (ESPECIALLY the good ones, the ones that did drop items like Scourge Bone Chimes and the Flute of Accuracy) so players would sometimes do a high risk, almost an "all in" attempts to fast creep or to steal the opponents creep spot in order to take their item, only to find a godtier item that's just not for them and sell it for the worth of one and a half or two at best tier one units which they'd already lost creeping the camp initially.

Such an attempt is also often seen as a risk for losing the game on the spot for that creep camp if caught off guard by the opponent for the off chance that you actually get the item you want/need which ultimately will win them the late game.

DotA2 solves that issue by having NO RANDOMISED item drops; all players gather gold in the same three ways (passively, by killing creeps and heroes and by destroying enemy buildings) which then THEY decide what to buy with the acquired amount.

From all the modern MOBA's, DotA2 as the oldest successful one which was the initial vanguard for the design of the genre and both the developer and the integrator of the mechanics that would later be simply adjusted in other MOBA's but remain relatively same at their core, DotA2 has the most PUNISHING mechanics of them all. 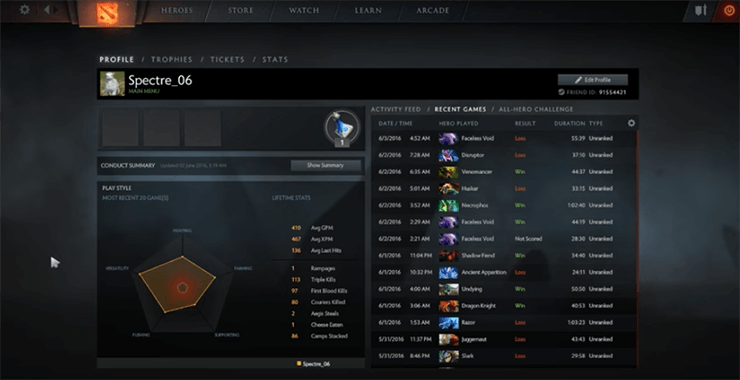 Whether by choice or simply because it was the first of its kind and didn't know any better, often referred by other, more modern MOBA players as a "diamond in the rough", DotA2 teaches you how to become good at it at a very fast rate.

DotA2 takes the principle of "do or die" to the maximum, so all of the players that have at least 100 games of DotA under their belt are in retrospect much better than players in other MOBA's with the same amount of games simply because DotA2 punishes you the hardest.

From gold loss by death, unavoidable ganks by lack of map attention or simply becoming obsolete late game by buying the wrong items, you'll either learn the game really fast or you'll just quit it. But it might be exactly that aspect of harshness that makes the pro players love the game so much and their fans appreciate their skill and gameplay finesse that much more.