10 Mysterious Secrets About The Matrix

Published in Entertainment and Viral on 12th July, 2018

The Matrix is a sci-fi movie that was released in 1999. The movie stars Keanu Reeves, Carrie-Anne Moss, Laurence Fishburne, Hugo Weaving, and Joe Pantoliano in the main roles.

The movie focuses on a dystopian reality in which machines have control over the human population, and are using humans mainly as an energy source, without their knowledge. Humans live in a simulated reality, known as the Matrix, and once a hacker and computer programmer known as Neo learns the truth, he joins a rebellion against the machines that control everybody. 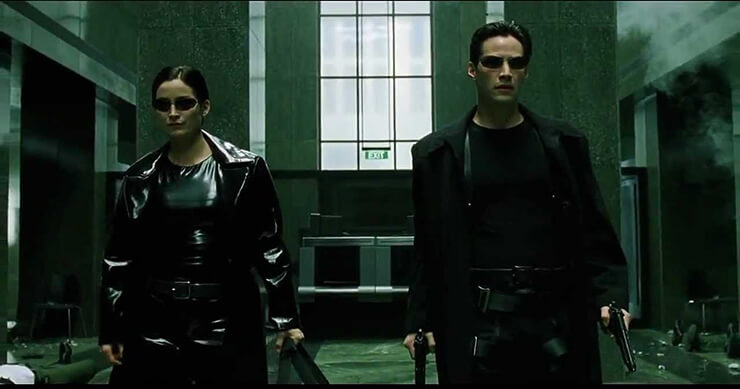 The movie revolutionized the film industry with its visual effects and action packed pieces, but it also left its mark with its philosophical ideas and theories.

In the movie you can find oriental philosophy and references to Judeo-Christianity which has led many to speculate that the writers wanted to convey a message about our reality: we are being controlled by a system, and a savior will come to liberate us, and that Neo, the main character in the Matrix is that savior.

There are many things and secrets hidden in the movie that only a hard-core Matrix fan can catch, so let's have a look at what you might have missed. You'll also learn about a few things that happened off-screen along the way.

From the beginning of the movie we can see that the writers left hidden meanings in each of the characters' names.

Neo means new, and is also an anagram for the word "one", hinting that he's the chosen one, who has to liberate humans from the machines. Even from the beginning of history, there have always been saviors similar to Neo, starting from Buda to Jesus, and many more.

Morpheus is named after the god of dreams and Ovid's bestseller Metamorphosis.

Trinity's name means "three" which is also connected to Christianity. It is a Christian dogma that states that God is a Divine Team of Father, Son, and Holy Spirit.

Same as with the holy trinity that reportedly resurrected Jesus, Trinity bring Neo back to life in the movie.

Just as the birth of Jesus had been prophesized, Neo is also seen as a savior who is not born of natural means, and who's here to destroy the Matrix and free people from the machines. 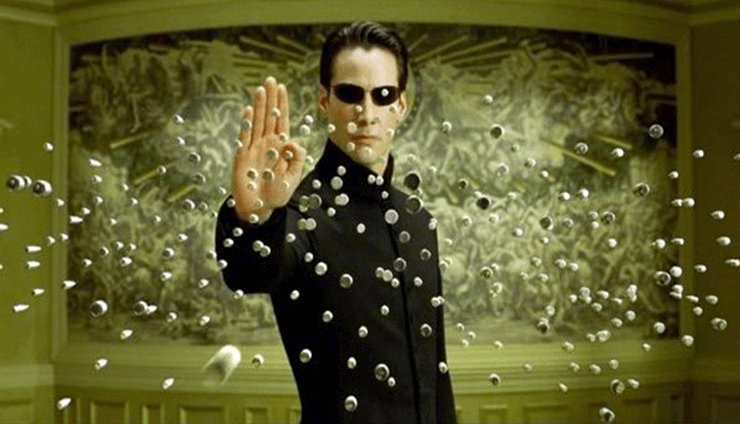 After his assassination by the agents of the Matrix, he comes back to life, and even has some new abilities he didn't have before, which is also a reference to Christianity and the resurrection of Jesus Christ.

Although there are a lot of other religious elements in the movie, according to some, the movie can be seen as anti-religious movie, which sees the idea of a savior as something that's imposed by the same system that controls them, and a mere response to the desire of the people who wish to be free, but in reality no such freedom exists. Once people start believing that they've managed to escape the system, they can actually fall into another simulator, which is also controlled by others, and be convinced that they have awakened, but might actually still be asleep.

Allegory of the Cave by Plato

There are a few similarities to Plato's allegory of the cave in the movie. Plato's allegory proposes that life is like being chained up in a cave, forced to see only the reflections of people and objects passing by behind you.

In his allegory, three prisoners have been chained up in a cave since birth with no knowledge of what the outside world looks like. They are chained facing a wall, and the only things that they can see are the reflections of people walking behind them. The fire burning behind them gives of a fake light that makes them see all of these reflections of people carrying objects. The prisoners even name these illusions and perceive them as real. That's until one of the prisoners is freed and sees the outside world for the first time. 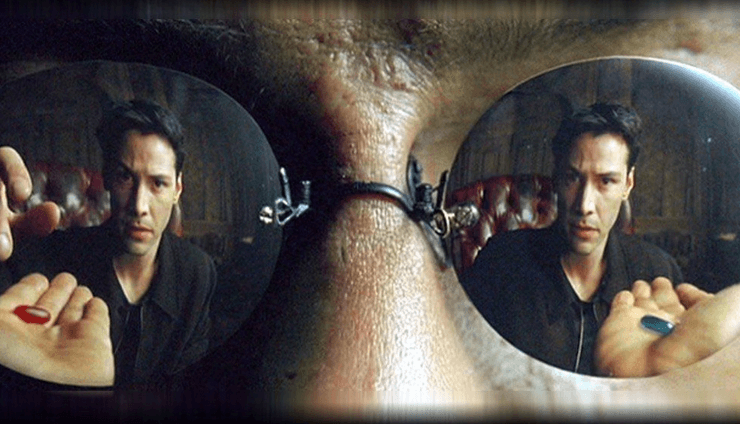 The sun hurts his eyes, and produces momentary blindness, because he's never seen real sunlight before. It would take him time to adapt to the light, same as in the movie, after Neo wakes up from the Matrix and asks why his eyes hurt, which is a clear reference to the myth of the cave.

Same as the cave's prisoners, Neo has also been imprisoned and a different reality has been imposed on his eyes, and like the man who leaves the cave, he eventually realizes that it was all a hoax.

Another reference in the movie used from the myth of the cave is when Neo returns to the a Matrix after seeing the truth, same as the man returns to the cave to share what he saw with the others, only to have them find him crazy, because their vision of reality is limited and they have trouble believing something they haven't seen with their own eyes.

The Decay of Reality

In the movie, Neo hides his illegal programs in a copy of Simulacra and Simulation by Jean Baudrillard.

Simulacra and Simulation is a postmodern book about the decay of reality and its replacement with simulated images.

Morpheus welcomes Neo to the Desert of the Real, which is also a reference to Baudrillard's book.

Frequent Use of Mirrors

The movie focuses a lot on images and reality, and that's why it's no surprise that it uses mirrors so frequently. Even Morpheus's sunglasses are mirrored. This motive seemed to indicate that the Matrix is about reflection and perspective, truth & illusion. It's also about knowing yourself as opposed to trusting any of your senses.

Even though you thought you knew many of the secrets hidden in the Matrix, I'm sure that some of these facts shook you, regardless of how big of a fan you are.

But what happened behind the scenes? Now that's a whole different story.

What are some of the secrets you probably didn't know about the actors and the film crew?

The Matrix was really action packed, and for some of the stunts in the movie they had to use special effects and stunt professionals.

However, that wasn't the case for one of Keanu's scenes. In one of his scenes, Keanu walked on the ledge of a window, 34 floors up, holding a bulky phone in his hand, without using any cables or a stunt double.

As if the scene wasn't enough terrifying enough, he even decides to risk his life while doing it.

The Wachowski Brothers wanted to cast Johnny Depp and Warner Bros. wanted either Brad Pitt, or Val Kilmer. Lucky for Keanu, none of them worked out. Nick Cage, Leonardo DiCaprio, Tom Cruz, and Will Smith also turned down the role, before Keanu became the one.

The S&M Club Was a Real Place

The scene where Keanu's character goes to meet Trinity was shot in a real S&M club in Sydney, called the Hellfire Club. The director wanted to keep the scene and the atmosphere as authentic as possible, which is why he didn't want to cast extras as customers in the club, but instead asked the club's regular members to come dressed in costumes they would normally wear, which didn't just add to the unique atmosphere of the scene, but also saved the Wachowski's a lot of money on costumes, whips & chains, and everything in between.

The lobby shootout scene is one of Matrix fans' favorite scene, but did you know that even though it lasts only 3 minutes, it took 10 days to shoot it? That's mainly because most of the special effects that were used are practical, and digital effects were only used to get rid of the wires on crazy stunts, such as Trinity's cartwheel stunt, which Carrie-Anne Moss actually nailed in just one take, which not only saved the producers time, but saved them a lot of money as well.

Keanu Reeves is known for his dedication to his roles. He tries to avoid stunt doubles whenever possible, and tries to do all of his stunts on his own. He had to prepare for his stunts and undergo rigorous training for months before shooting.

He achieved some amazing results in the Matrix, and the fact that he had to have spinal cord surgery before shooting makes him seem even more incredible.

He managed to continue shooting even after his surgery, but he wasn't really able to kick, which is why they had to adjust his fighting choreography.

He wasn't able to kick for two months. That's why he doesn't do a lot of kicking in the movie, which doesn't really matter all that much, since he was still able to do all of those amazing stunts which make the movie one of the best action movies of all time.