Published in Lifestyle on 8th August, 2018

Sting the library dog is an ex-racing greyhound turned therapy dog, who visits his local library in Minnesota every week to offer children the chance to practice their reading skills by reading to him. This helps to provide a safe, non-threatening and non-judgmental space for children to practice their reading. Unfortunately however, back in February, Sting was left looking forlorn and alone when nobody showed up to read to him. His owner took to twitter to share his plight and within a few hours floods of twitter users have been asking to come and bring their kids to read to him, and he hasn't been lonely since. 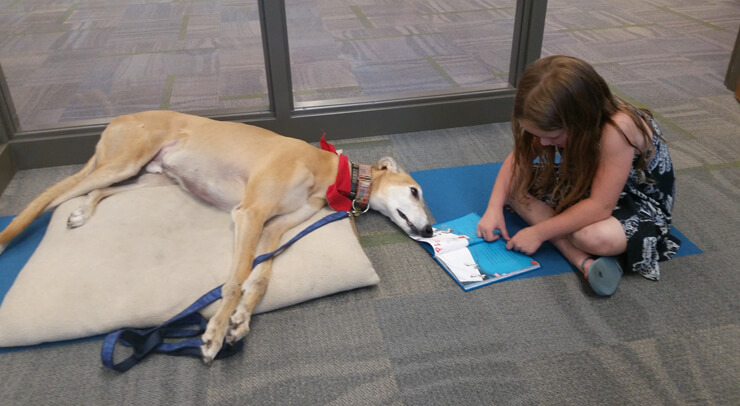 The Labrador Helping A Veteran To Heal

Chief Petty Officer Amanda is a veteran who previously served on an elite navy seal team, who found adapting to civilian life once returned from Afghanistan incredibly difficult. She struggled with anxiety, depression and an overall difficulty to adjust. However, she found hope again through the "K9's for Warriors" program, which trains and pairs rescue dogs with veterans in order to provide help and emotional support. The dogs themselves get the chance at a new life and so do their owners. She was placed with a gorgeous black rescue Labrador names Lazer and says that the fact that she has a companion to come with her everywhere, who loves her completely unconditionally has radically helped her to heal from her time serving in the military.

The Pitbull Who Rescued His Epileptic Brother

Ember is a much-loved rescue Pitbull that was adopted by a family in Ohio and has been tearing down the pit-bull reputation for aggressive behavior since day one. When his rescue-brother Tre had a seizure in the bathtub, resulting in his head being submerged underwater, Ember quickly rushed to alert his owners by waking them up and leading them to the bathroom. Luckily, the quick action Ember took meant that Tre suffered no long-lasting effects and made a full recovery. Once home, his loyal Pitbull companion didn't leave his side. 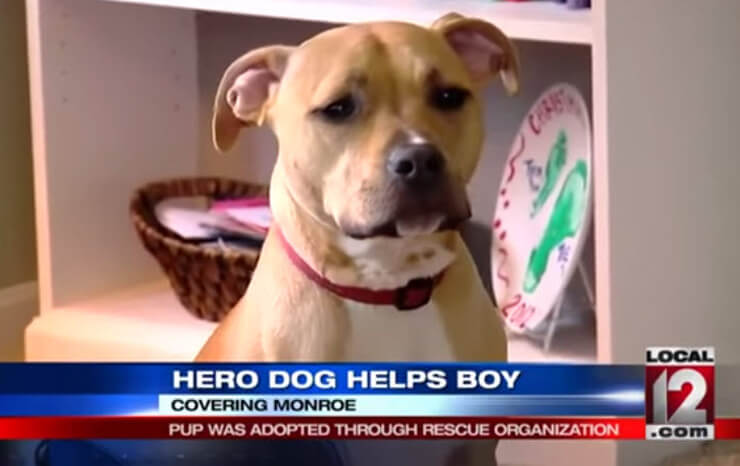 The Retired Guard Dog Who Rescued An Abandoned Kitten

In 2014, an unexpected friendship arose. While out on a walk with her owner, a large Akita dog named Lily came across and quickly rescued a tiny two-week old kitten who'd been dumped off in the woods by the highway. Instantly her owner, Lorrie, took the kitten into her home and the two animals, although vastly different in size, struck up a friendship. Once told that the local animal shelters couldn't take the kitten in, and upon seeing the amazing friendship that the two animals has struck up, Lorrie let Lily keep her kitten companion. She says that she suspects the reason the her dog may have taken such a keen interest in the little kitten is because she never got to have puppies herself, and is now dedicated to helping this little cat thrive.

Two Boxer dogs were found dumped in front of a pet rescue in Kansas, one in a black trash bag, clearly having been dropped off and transported in the bag because she was too emaciated and sick to move. A little further down was another Boxer, chained up to a pole and looking similarly sick and starving. Both dogs were in bad condition and the staff at the pet rescue center didn't know whether they'd be able to even survive the night. They named the male and female Boxer pair Triumph and Hope respectively, and immediately took them in, giving them lot's of love, food and emergency medical care. Both dogs are now well on their way to a full recovery from the brink of death and Triumph has found a foster home to recover in. 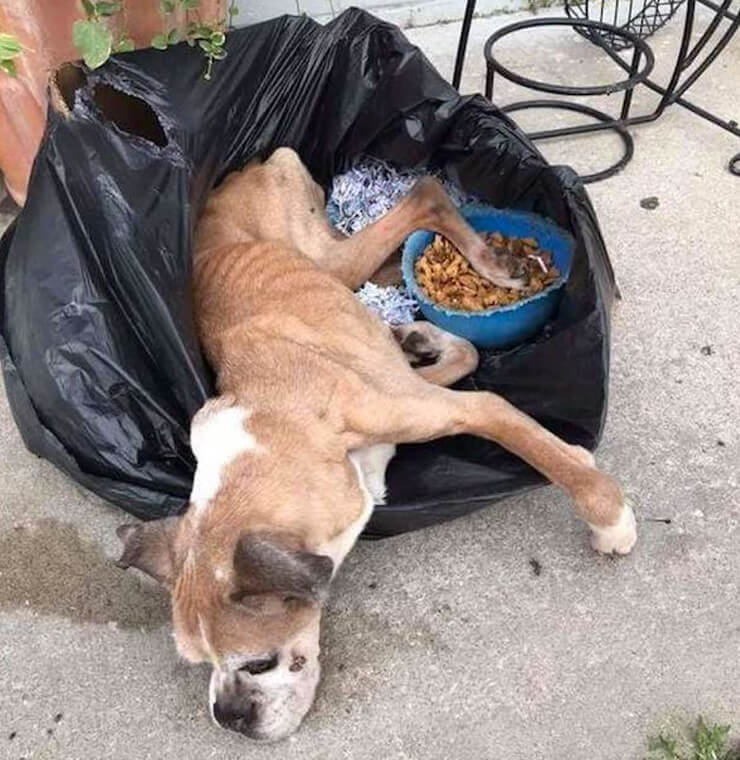 A 3-year old Mastiff now named James was rescued from a dog meat farm near Pyeongchang in South Korea. He and his fellow imprisoned dogs were kept in run-down, dirty cages with the specific purpose of being farmed for meat. Luckily for them, the farmer in charge of the dog meat farm had a change of heart and called the Humane Society International to help rescue the dogs. As the rescuers arrived, James peered over the wall of the pen, seemingly greeting the rescuers. Once he and the 84 other dogs being kept in the farm had been successfully rescued, they discovered that James had a severe fear of humans, likely from abuse suffered at the farm. Gradually, with a lot of therapy, space and time spent playing freely with other dogs, he has begun to warm up and become comfortable in his foster home and is now a playful, curious and lively dog.

Penelope the Chihuahua was found abandoned with five young puppies at a high-kill shelter in California and when an animal shelter stepped in to rescue her and her pups, she was found to be a very timid and socially anxious dog. Luckily she was taken in by her foster mom, who knew how to handle highly anxious dog and since then she has developed into a completely new dog, and found herself an unexpected job. She was invited to take part in an airport therapy program as one of America's busiest airports - LAX and now works there, helping nervous flyers to overcome their fears and chill out before catching a flight. 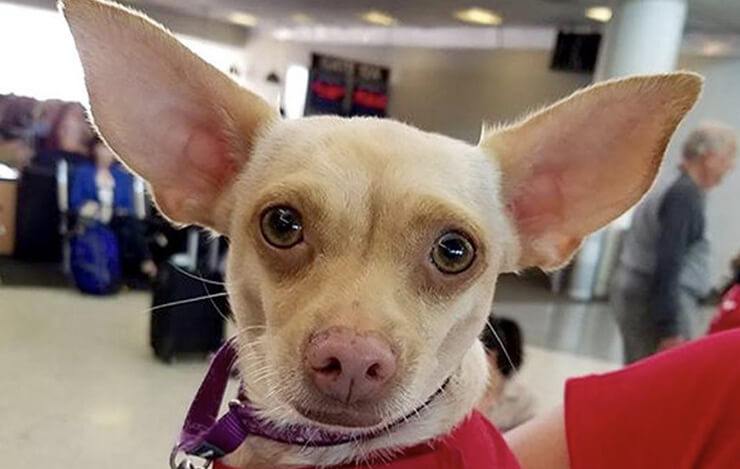 16 year old Chihuahua Tito was found blind, unable to walk, struggling to breath and needing surgery by rescuers, who thought he may well have very bleak chances. His rescuer and foster mom however, knew immediately that she needed to try everything to give him a second chance. With the help of a vet, they got Tito back to being able to breath properly, gave him the surgery he needed and helped him re-socialize. During this process, he formed a strong bond with his rescuers other dog, a Pitbull named Frank, who approached him and immediately started to comfort and calm Tito. The pair formed a strong bond and although Tito still cannot see or walk, he is living life to the fullest with Frank by his side. With the help of a strap-on carrier, Tito sits happily on Franks back while on walks and is having the time of his life.

Rusty the rescue dog was found one morning in May 2015 by a passerby who had seen him, chained to a fence pretty much every day for the past three years. He plucked up the courage to approach the dog and eventually managed to gain his trust, finding that this gorgeous dog was incredibly friendly and loving, despite having spent his entire life chained up to a fence with little to no interaction. His rescuer approached the owner, who told him that Rusty had been chained up and forgotten about for 15 years, at which point his rescuer decided enough was enough, and that he was going to take Rusty away. A few short days later, Rusty was safely in an animal sanctuary, where he was cleaned down, treated and cut free from his collar and chain. Within a couple weeks they had found a foster family for him to go to, and he finally got the chance to start life over again with five other canine siblings to play with. Within the space of a few weeks, he had turned from a scared and aggressive dog that had been isolated his entire life, to a friendly and lovable part of the family.

In an unexpected turn of events, a dog has rescued a human. In Nairobi, Kenya, a stray dog ran across an abandoned baby in the forest, presumably left there by it's mother who couldn't care for it. The stray picked the baby up by the plastic bag that it had been left in and carried it across a busy road to join her litter of puppies. Onlookers quickly found and took the baby in, rushing her to the local hospital where she made a full recovery, thanks to the efforts of one stray dog.