Published in Entertainment on 21st August, 2018

The blockbuster season of 2018 got off to a brilliant start with Avengers: Infinity War, but has dropped in quality thanks to Solo, Deadpool, and Jurassic World: Fallen Kingdom. None of those movies are dreadful, but they aren't classics in the same league as the MCU's biggest movie to date, and for a while there it looked like Infinity War would walk away with the title of best blockbuster of 2018. The Mission Impossible: Fallout came along and wiped the floor with all competition. Sometime in the franchises 22-year history, Tom Cruise struck a balance that helped the series discover a winner formula that produced arguably the finest film in the franchise to date. So let's argue about it. Is Fallout the best movie in the series, let's find out as we ranked the films in the Mission Impossible franchise from worst to best. 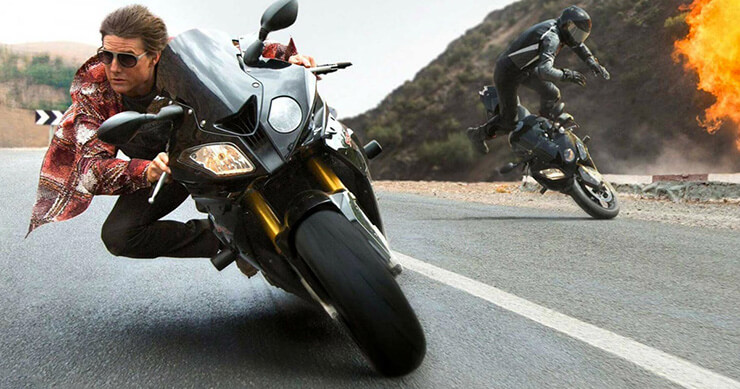 When ranking Mission Impossible movies, the worst entry is easy to spot. John Woo's Mission Impossible 2 is easily the weakest film in the franchise but it did enjoy financial success as it became the highest grossing film of 2000. None of that money has any bearing on the quality of the film, it's just that back in 2000 there was still this thing called star power, and Tom Cruise was the biggest star on the planet along with Will Smith and perhaps George Clooney. The sheer wattage of Cruise's fame meant that any film he was in during this time would be a guaranteed hit, and MI 2 is no different, despite the fact that it's mostly drivel.

Cruise is back as Ethan Hunt though this version has next to nothing in common with the character he played in the first film. The sequel see's Hunt taking on Ambrose: a former IMF (Impossible Mission Force) agent, played by Dougray Scott in a performance that is completely forgettable unless you're Scottish, then it's hilarious. The plot revolves around Scott's character trying to obtain a deadly virus and Hunt's efforts to stop him. Those efforts only involve action in the last act of the movie. Until then we have to sit through a rubbish remake of Hitchcock's Notorious as Hunt uses Thandie Newton's Nyah, a professional thief (which has absolutely no bearing on the plot as her sleight of hand skills are uncovered instantly by Ambrose) who goes undercover because of her previous romance with the villain.

Mission Impossible 2 isn't all bad as Woo is still a fantastic action director when the film allows him to let loose. While the action is better in every other film, they don't have Woo's idiosyncratic style and sense of absurdity which includes his trademark balletic gunplay, and a superb motorbike chase. It's certainly the worst film but it does have its own distinctive charm and it does open with Cruise free solo climbing for real so the madness of Tom Cruise is front and center.

One of the biggest strengths of this franchise is that it doesn't take long to get to the good stuff and the first film delivers this in spades. Back in the mid-90s the cinematic landscape was very different. Franchises didn't take up a lot of room on the release schedule and it was even rarer to have a series that was consistently fronted by one actor. The biggest franchise of the time was the original Batman films which went through three actors (the original Michael Keaton, Val Kilmer, and George Clooney) on its way from gothic classic to Day-Glo farce. The only franchise to continue into the next decade with the same actor was the Pierce Brosnan era of James Bond- even then, it was the nadir or the series Die Another Day.

While all but the first Mission Impossible movie would be released post millennium, the first entry is a fantastic template for the series as well as being flawed enough that different directors could either improve on what came before, and/or put their own spin on it. 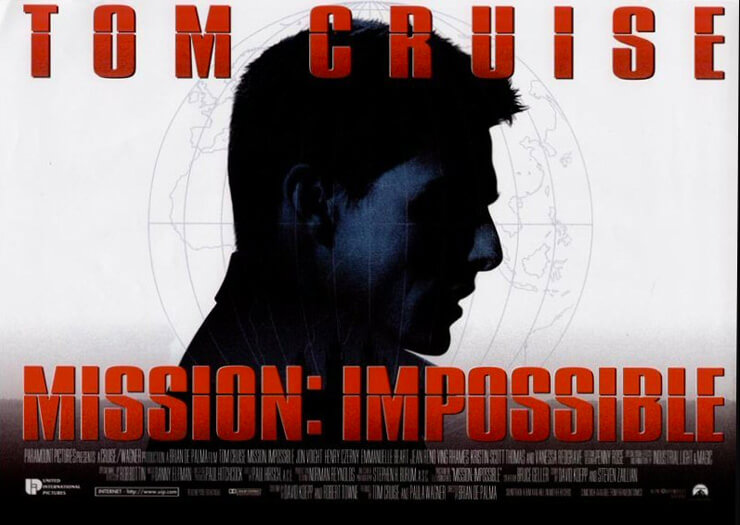 Mission Impossible is a movie bursting with style and action thanks to director Brian De Palma. It's a movie that lives or dies on the quality of its set pieces and it sets the bar very high with the break-in to Langley (which gave the franchise its first iconic moment with Cruise hovering over the vault floor, and the finale train fight that is still exhilarating despite the dated visual effects.

It's not just about the stunts though as Tom Cruise channels both huge amounts of intensity and competency as Ethan Hunt, a character that has become Cruise's onscreen avatar. Mission Impossible is a great movie but the plot is a touch too convoluted and the a little too melodramatic for it to be a true action classic.

Mission Impossible 3 is the often-overlooked middle child of the Mission Impossible series. While it undoubtedly has the best villain of the series in the form pf Philip Seymour Hoffman's arms dealer, Owen Davian, MI 3 doesn't quite reach the heights of the best installments but it's also not as obviously bad as 2 or as insanely paced as the first film. Not only is this the obvious mid-point of the series, it's also the film in director JJ Abrams, who made his feature film debut here, career that is the least talked about. That is probably due to having both Star Wars and Star Trek on his CV and Mission Impossible, while being a huge franchise, pales in comparison to both of these science fiction juggernauts.

Despite this, Mission Impossible 3 is a brilliant installment in the franchise that deserves to be rediscovered by fans that where blown away by the last three movies. There is the aforementioned best villain in the series: seriously, Hoffman is terrifying in the role, especially when he's the person who has been captured. It also brings back the team dynamic of the first movie, though this team wouldn't reappear in the future apart from Ving Rhames mainstay, Luther. It's also the only film in the series to give Ethan a proper personal life with the plot centered on his coming back to field work after one of his IMF trainees was murdered as he tries to juggle this and an engagement to Michelle Monaghan as Julia.

Mission Impossible 3 doesn't scrimp on the action either, with Cruise upping his game stunt-wise with the brilliant bridge attack, and the final act run across what might as well be the entire country of China. The film is also notable for the first appearance of Simon Pegg as Benji.

It's hard to imagine considering the fact that Ghost Protocol is the first or a three-film streak of action classics that it was seen by Paramount as the last gasp of a diminishing series. Despite the obvious quality of Mission Impossible 3, it's the lowest grossing film of the franchise mainly thanks to Tom Cruise's nosedive in popularity in the late noughties thanks to his connections to Scientology and that infamous Oprah appearance. The moviegoing public had fallen out of love with Cruise, leading to him being basically fired from the franchise until the studio rethought their strategy and decided that the fourth Mission Impossible film would be a platform for Cruise to hand over the franchise to new recruit Jeremy Renner.

Thankfully, it didn't quite go as planned as Cruise successfully revamped the series as a family friendly action adventure series complete with life-threatening stunt-work that the current era of Cruise fame has become known for. Like the third film, Ghost Protocol was helmed by an inexperienced director: Pixar's Brad Bird making his live-action film debut, who overachieved thanks to their creative partnership with Cruise. What we got was Bird's version of a spy film which plays almost like a live-action version of The Incredibles (for which Bird won his first of two Oscars) as Ghost Protocol utilizes the team dynamic, each with their own distinctive skill-set that who bring these strengths together to save the day. Ghost Protocol is also home to the series greatest set piece as Cruise proves that he will do anything to get butts in seats by climbing the Burj Khalifa for real. Beat that, Bond.

There aren't many franchises that revolve around one character that not only keep a high level of quality throughout multiple movies but actually get better with each. After the early hiccup of Mission Impossible 2, the franchise has gotten stronger with each passing film since the third entry. While no Mission Impossible movie after Ghost Protocol can boast the Burj Khalifa sequence, Rogue Nation solves this problem by making each action sequence the best it can be. Seriously, you could take any set piece from this film, whether it's the Hitchcockian Opera fight, the underwater heist, or the thrilling chase that follows it, and they would be the standout moments in nearly every other action movie.

Thanks to the surprising success of Ghost Protocol, Tom Cruise was Mission Impossible's main man again, and took even more creative control. The biggest consequence of this is the hiring of writer/director Christopher McQuarrie, the only director of the franchise who Cruise had worked with before: on the solid Jack Reacher. Cruise and McQuarrie are clearly a match made in heaven as Rogue Nation was the best movie yet. A big part of this was due to the return of characters like Ving Rhames' Luther (who sat out Ghost Protocol) Simon Pegg's Benji, and Jeremy Renner's Brandt who went from possible replacement to sidekick, all of whom give the film the connective tissue the franchise largely ignored up to this point.

The real winner though was the introduction of Rebecca Ferguson as undercover MI6 agent, Ilsa Faust. She is easily the series most interesting character apart from Ethan and, if there is any justice, should be the future of the franchise when Cruise leaves or is killed doing another insane stunt.

It's rare for the fifth film in a franchise to be the best, but it's impossible that the sixth film is even better, though impossible has become a walk in the park for this series. Fallout isn't just the best Mission Impossible film, it's also one of the best action films ever made: easily sharing the same heights as Aliens, Mad Max: Fury Road, and it wipes the floor with the best James Bond or Jason Bourne has to offer. Fallout achieves this by breaking new ground in the franchise by being the first film in which a previous director, Rogue Nation's Christopher McQuarrie, has returned while also being the first direct sequel to the previous entry.

There is complicated about Fallout's success: it's the result of a writer/director at the top of his game working with a cast that are always striving to push the envelope. In many ways Fallout is like a greatest hits package of not only the Mission Impossible franchise, but action films in general. It ups the ante of what has come before with a more bruising bathroom fight than Casino Royale, a chase sequence that breathe the same high octane air as Fury Road with Tom Cruise gliding through traffic in a motorbike that moves like a tie fighter from Star Wars, while also fixing the problem of the previous films peaking at the end of the second act by staging a daring helicopter battle that has to be seen to be believed. Add to that a foot chase over the London rooftops that cost Cruise a broken ankle, and having Ilsa Faust return as an even wilder wildcard than Rogue Nation and you have the stuff that classic blockbusters are made of. At the end what you have is the best and most consistent action franchise in cinema. Let's hope that McQuarrie and Cruise go for a trilogy.