Published in Gaming on 2nd October, 2018

It isn't that Call of Duty games don't offer quality multiplayer. The problem with CoD multiplayer is that it achieved its apex back in the glory days of Modern Warfare 2. That game had the best multiplayer of them all, with phenomenal maps that were just right in terms of design. Lots of spots made for head-on conflict between two teams, a couple of corridors for some adrenaline-pumping close-quarters-combat, a couple of open areas for those who wanted to act like heroes (but usually ended up dying from snipers). And powerups were also amazing, just right and not overpowered. Let's not talk about the perfect selection of weapons that game offered. Playing CoD MW 2 multiplayer was the best time ever, especially when roaming maps in the magnificent hardcore mode. 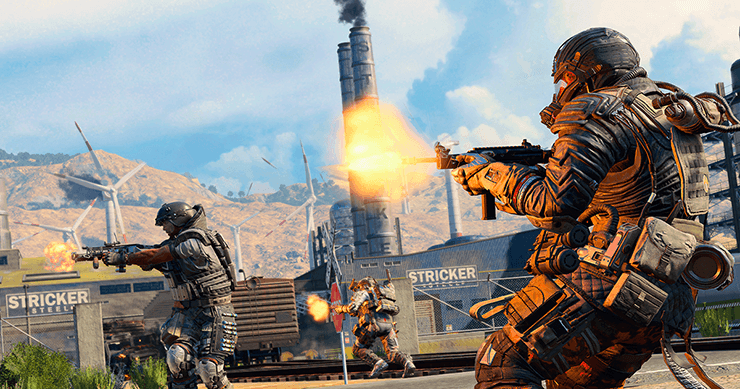 From then on there were numerous CoD games and neither managed to recreate that perfect formula we got in Modern Warfare. Further, the game's multiplayer mode didn't get any kind of real upgrade. Maps are still small like they were a decade ago when PS3 and Xbox 360 reigned supreme, the basic gameplay didn't change much for the past decade or so, and the weapons, aside from different skins and names, also stayed pretty much the same. And let's not start talking about lousy map packs that sport ridiculously high price tags. Sure, it's nice to play CoD's fast-paced multiplayer from time to time but, for almost half a decade now, Call of Duty multiplayer simply isn't worth the price or the time. Could all of this change with the addition of Blackout, a battle royale multiplayer mode that's a part of the upcoming Call of Duty: Black Ops 4? We played a lot (and we mean A LOT) of Blackout games during the current PC open beta event and will try to answer the question.

As soon as you start your first Blackout match you'll notice just how every single part of the game is perfectly polished. The control scheme is intuitive, the whole process of searching for a game, waiting for the server to fill up and the match to start is straightforward and with zero problems, and during actual matches, there are zero bugs and zero lag. This is Fortnite level of polishing and gameplay fluidity, which would be okay if Blackout competed with Fortnite. But this game competes with PUBG and in that context CoD Blackout's level of refinement stands tall as Mount Everest.

This is because PUBG is still riddled with bugs and glitches, even though almost ten months have passed since the game's official release. With each new patch, new problems arise and this drives the game's community crazy. Optimization is still surprisingly poor, lag is still present from time to time, the game is still filled with cheaters, and control system and user experience are still quite poor.

On the other side, we have Blackout, which is a perfect Battle Royale experience aimed toward those who want relatively realistic gameplay along with the first-person perspective. Here, inventory got simplified making inventory management a breeze. Healing is also simplified and it takes just a couple of seconds to shot some much-needed health. The mode also features a plethora of small details that improve quality of life. For instance, if you find a 3X scope or a reflex scope it gets automatically equipped to your rifle. In case you collect a sniper scope, it will stay in your inventory except in case you have a sniper rifle without a scope, in which case it will also be automatically equipped upon picking it up. This is amazing and really speeds up the gameplay. Next, everything is so fast to pick up, so you can equip yourself for combat in about 20 seconds upon touching the ground, which is amazing. 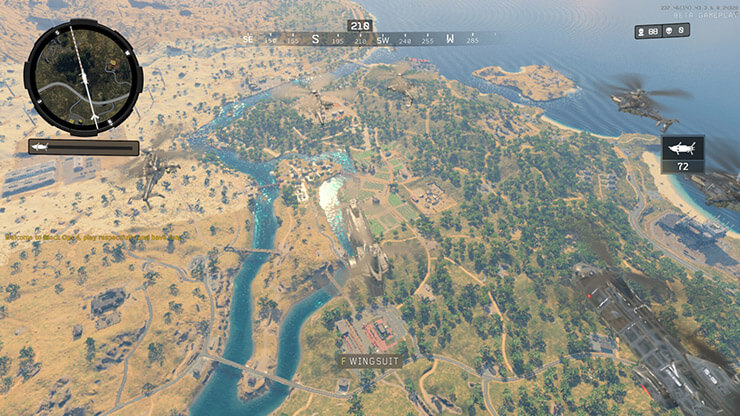 And the game is excellently optimized. Sure, the game looks like it was in hibernation from 2012, but the lack of details and poor textures are justified if we get silky smooth performance. And that's exactly the case with Blackout. Everything runs at perfect 60 frames per second and while the game isn't a looker, the map is filled with colors, lots of trees and grass and with enough diverse terrain and excellent lighting to make it pleasant to the eye despite the obvious lack of detail.

Tight gameplay and a functional map

And when it comes to the map, we think it is excellent. It is a huge map, dozens of times large than any other CoD map any game from the series featured and we have to say that it looks excellent. It is made out of parts of notable CoD multiplayer maps. You can recognize Wind Turbines, the Estate, Fracking Tower, Nuketown, and other map parts. Sure, some may say this is a clear case of recycling the old content but this is actually a good thing. Experienced CoD players will learn the map in a matter of hours and the clear distinction between different areas of the map will also be of great help to newbies in getting their bearings. There are 14 areas in total on the map and they are connected with a thick layer of roads. And no matter which area you chose to be your starting place, you will find plenty of different weapons and gadgets once on the ground.

There are also zombies present, but they are confined to just a few areas on the map and those areas also are hiding some of the classic weapons from Call of Duty zombie modes. And the map is extremely varied, with large towers perfect for sniper nests, farm areas that offer plenty of cover among their huge amount of small houses, industrial complexes that present huge labyrinths of rooms and corridors, and weird areas where zombies are lurking. 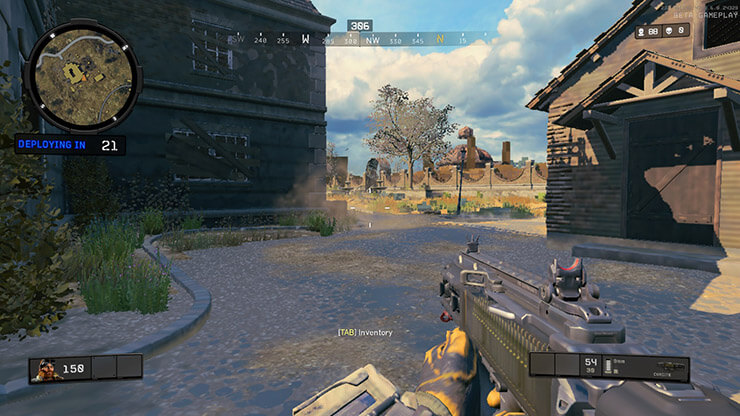 From the air, it looks like any PUBG map but once you land and play a couple of matches you will see just how varied it is and just how it is easy to learn it. The only thing that the map lacks is more players. The limit is 80 players but we hope the mode will feature 100 players once the game goes live. Other than that small downside, Blackout map is great.

And when it comes to gameplay and the whole experience, you start by jumping out of the helicopter and with the help of a wingsuit (which is a great addition because it allows for extreme speeds while being superbly accurate, allowing players to land anywhere they want) you have to pick your landing spot. Once you land you can quickly set up because the map is jam-packed with various weapons. Unless you land in the middle of nowhere with just one small shack to loot, you will be equipped with weapons, a couple of first aids, an armor and a backpack in less than a minute.

Finding scopes and weapon improvements is also quite easy since every building has at least a couple of pieces of each. And then it is time for some killing. And the gunplay is marvelous; weapons behave like you would expect in a CoD game but this time they have to shoot people from much greater distances, which they do rather well. The game is filled with various pistols, shotguns, ARs, and snipers and most weapons are quite lethal if you know what you are doing. The welcome addition are throwing weapons mapped to the E key, which can take enemies in one shot and are extremely effective in one-on-one encounters. Make sure to have throwing weapon equipped because it can save your life or even win you the match.

And here you also have a rocket launcher (which is excellent for vehicles but lousy for shooting at enemies who move on foot) and a semi-automatic grenade launcher, which is the best weapon in the entire game. It is best used during the end-game, in order to force enemies out of cover and to prevent them from camping. Really, having the grenade launcher when left along with one or two other players near the end of a match is a huge advantage. You can create hell all by yourself, drive enemies out in the open and then quickly deal with them. 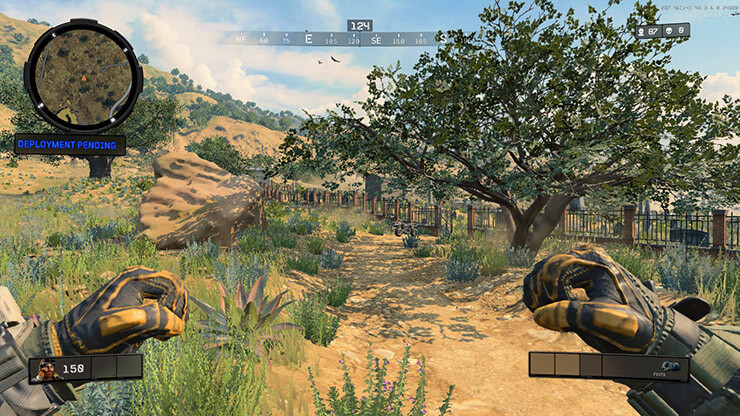 Sprinting speed is much improved compared to PUBG and that's excellent because it allows players to cross the much greater distance in the same time, contributing to Blackout's fast pace of each match, and cutting idle time, when you are searching for other players to shoot at, to a minimum. The game is filled with vehicles with a helicopter being the best one of them all. It is made for squad play with one player piloting the machine and others sitting at sides, shooting at everything that moves. Controls are extremely arcadey and learning them is a complete no-brainer. Quads are extremely fast and made for two players and they offer a very fast way to move across the map.

Grappling gun is a great addition, allowing you to move extremely fast while on foot. You can climb up to a roof in a second, or use the gun to climb down extremely fast and surprise enemies who won't know what hit them. The game also offers short-term boosts that improve your maximum health, speed up time needed for healing, reveal nearby equipment and guns, and more. Most of them are handy but not game changers, but activating perks like Paranoia (audio notification activating as soon as someone targets you), Skulker (noticeably improves your speed of movement while prone or crouching), Stimulant (provides a 100 HP boost), or Outlander (take less damage while outside the playable circle) at the right time can mean a difference between a victory and defeat.

Overall, Blackout is awesome! This is something Call of Duty games needed in order to re-captivate audience and keep them hooked for a long time. The mode is designed flawlessly and the sheer level of production is astounding. Everything feels and works so good it's really unbelievable Treyarch managed to create such a nice battle royale game in such short time. 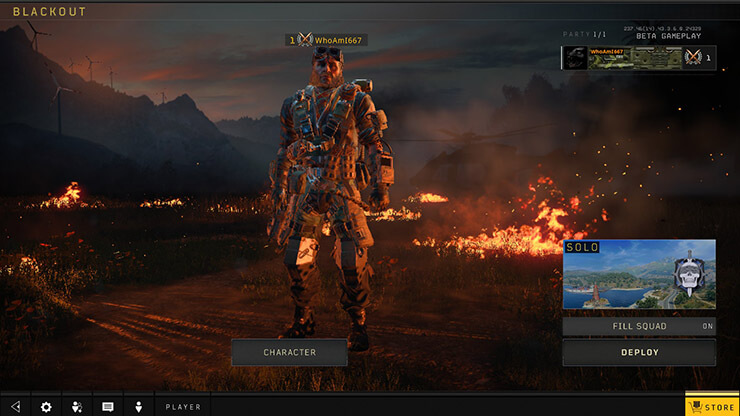 There are some downsides, of course. Firstly, tier III armor is simply overpowered and combined with a Stimulant perk it makes you virtually unbeatable. It takes a full clip (or more in most cases) to kill someone with a level 3 armor and that really hurts the game that is fast paced and where you can usually kill people in just a couple of hits. Next, the game is designed like it wants exclusively to attract people who like playing in squads. Vehicles are most effective when used by two or more people, and the game's promotional campaign is all about playing with friends. Also, some of the perks simply have to be nerfed because they can offer too big of an advantage in later portions of the game.

When looking at the console market Blackout will be, without a doubt, the best Battle Royale experience out there, especially on PS4 that doesn't have PUBG, at least for those who prefer realistic gameplay from the first-person perspective. PC games are a bit harsher towards CoD games and they could easily avoid Blackout just because it is a part of a Call of Duty title. But, even in beta, Blackout is much better Battle Royale experience than PUBG and it can become the most popular battle royale game when it comes out. The only problem is its price. $60 is simply too much for anyone who just wants to play Blackout. If someone at Activision comes up with an idea to sell Blackout as a standalone CoD Battle Royale game at a lower (around $20) price, Blackout could easily become the most popular multiplayer shooter in the world. It's that good.