Published in Gaming on 3rd October, 2018

Forza (both Motorsport and Horizon) games are some of the best racing titles we can play right now, and it seems like the latest addition in the form of Forza Horizon 4 is going to be the ultimate racing game of this generation but, and there's always a but, they all have the same assortment of issues which, while not running the experience (all of the games are awesome) can detriment it and make the games fall short of achieving their true potential. 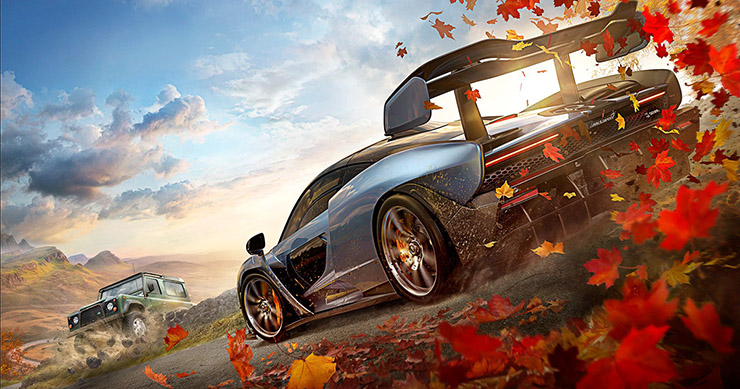 These aren't major shortcomings, and they all can be solved with simple solutions. Some of them could be particularly annoying like the Drivatar AI system, which is sometimes buggy as hell, but it is worth pointing out that even if Turn 10 and Playground Games decide to ignore these problems, Forza games will stay the best racing experiences of this generation thanks to Polyphony's inability to deliver a competitive product (even though Gran Turismo Sport become a worthy competitor after the game received a couple of patches and lots of free updates after its original release) and the lack of any top-notch arcade racer now that Need for Speed is at its lowest place ever when it comes with quality of new NFS games.

We do have Project Cars 2, an excellent sim racer but to enjoy the game in its full glory you simply need a quality wheel. Let's just hope that Kunos Simulazioni will make Asseto Corsa Competizione a game with a lengthy and meaty single player campaign (since they already achieved in making a superb driving model in the original Asseto Corsa), the only thing that prevented Asseto Corsa from becoming a true competitor to Forza Motorsport games. Well, that and the fact the game was hugely ignored on consoles. Now, let's talk about issues found in Forza games and ways they can be fixed or at least alleviated.

Look, the Drivatar AI system is an amazing achievement in some ways. By collecting real player data and creating a sort of a ghost AI for each player Turn 10 gave players a huge pool of potential AI opponents, making racing challenge excellent at any difficulty level. Drivatars behave like real people, they make real-life mistakes and their behavior is clearly different from what professional racers would behave on a track. But the system has its shortcomings and they can be infuriating at times.

For instance, Drivatars stick to the perfect racing line like their lives depend on following it at all times. This can make races predictable because you simply can outpace other drivers by utilizing alternate routes because the driving line isn't the fastest route at every point of a track. Next, they behave like driving hot laps instead participating in races with lots of other drivers. This is visible as soon as you start fighting with an AI driver, trying to overtake them. They ignore you like you aren't there. 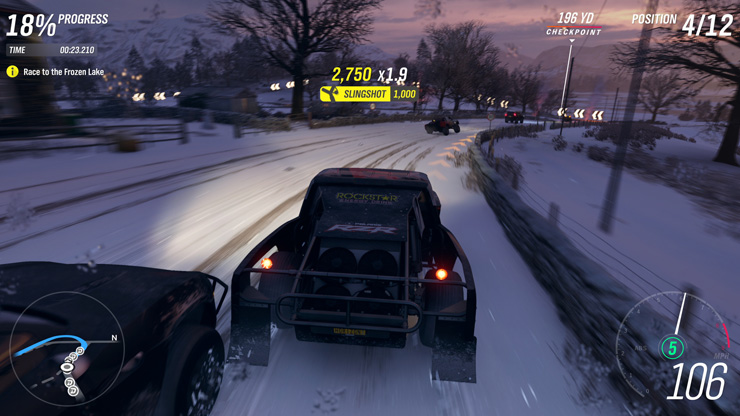 And while that's okay while trying to overtake them (their behavior can be explained as a struggle to keep their position), things often go south after you overtake them. Once you manage to pass them they will still completely ignore you, which can create some comically maddening situations. Like them sticking to the perfect racing line, not moving away just a bit to avoid hitting your car and then hitting your car and sending you both outside the track. Or simply not hitting brake pedal after getting overtaken which often leads to their car hitting yours head-on with full force, making a mess out of the whole race. This simply doesn't happen during real races and in most racing games because real racers (and most AI ones in video games) are aware of other participants in a race and will make necessary adjustments in order to avoid hitting drivers who overtake them. This can be fixed by simply enabling AI drivers to "see" other race participants, making them brake after being overtaken.

And there's the fact that, in ninety percent of races, you end up stuck competing with one driver who's just so much better than anyone else, making races boring as soon as they start because you know there's that one guy who's awesome and two dozen other drivers who are there to simply fill up the rest of spots. And that one awesome driver is always at pole position meaning you have to chase them during each race. This really can hurt the experience because it makes all races the same - it is you chasing the same driver over the course of six races of a series and then getting some other AI driver who rocks and chasing them over the course of six races during some other series.

Why Turn 10 cannot put five or six, or hell 20 awesome drivers into each race and make races in Forza much more challenging but at the same time much less predictable? Why they fill the roster with excellent drivers, like in Wreckfest, and make each race adrenaline pumping experience where you have to fight for each position? And while that would make the game harder it would make winning a series much easier because you won't have to wing each race because there would be lots of drivers who can end up first, making each series much more interesting to drive? In Wreckfest you can win a series by being first, third, fifth, and fourth for instance because each race has a different winner and each driver has an equal chance of winning a race. Make that happen in Forza games and they will become much better and much more competitive.

While there are some gamers who hate it, rewind mechanics is really handy and it can drastically improve the driving experience. It makes us more aggressive, and willing to pull more risks because we know it all can be fixed by pressing Y and rewinding the race to before we made the mistake that sent us out of the race. But rewind has its shortcomings.

For instance, you cannot pick a point of time to return to. Instead, you simply hit Y button and wait for the rewind to stop, which can put you at a point in the race you don't want to start from. Codemasters did a much better job with rewind feature (they made it, after all) by allowing players to stop rewinding at any time and start over from a particular spot in time, which is much better than what we have in Forza games. 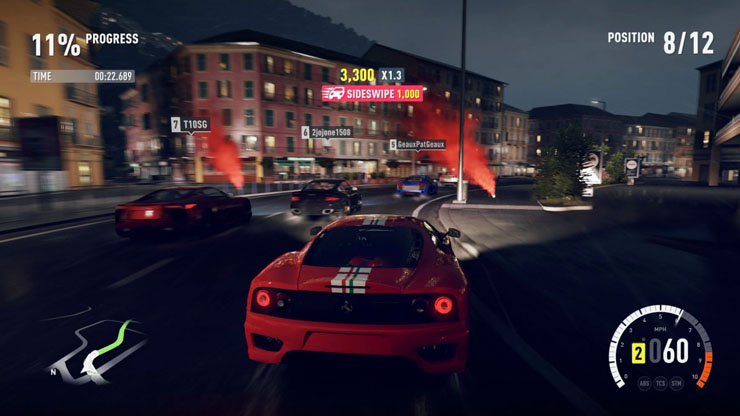 The other problem is that in settings, you can simply turn rewind mechanics on or off. There's no option to allow for an exact number of times rewind can be used. That would make races much better because we would know that we can use rewind feature just two or three times, making us more cautious and focused on driving instead of pulling out stunts every 15 seconds because we know rewind is here to save us, twenty times per single race if needed.

While there is a setting allowing us to pick the length of a race, it only has three options - you can pick short, normal, or longer race. And while that is okay with some players, we should pick any number of laps we want, not be limited to three simple options. Maybe someone wants just one more lap for most races because they noticed that, at the difficulty setting they play on, they always end up second. So, having one extra lap would be enough for them to snatch that first place in most races. And maybe there are players who want extra-long races, with ten laps or more? And, since I usually play at pro difficulty setting (one below the hardest difficulty), I want to play most races with two extra laps, but long race setting adds three or more laps to each race, which is too long for me.

Acceleration being the dominant car stat

There are lots of different car stats but one is by far the most important one and that's acceleration. Look, you could pick a car with best top speed, handling, and braking, but if it has .2 or weaker acceleration than the best car in the group, you will know that winning will be quite challenging. This isn't so important when playing at easier difficulty levels, but when playing at the pro or unbeatable it definitely can make enjoying the game less because we cannot pick any car we want, we have to stick with those that have best acceleration stat. 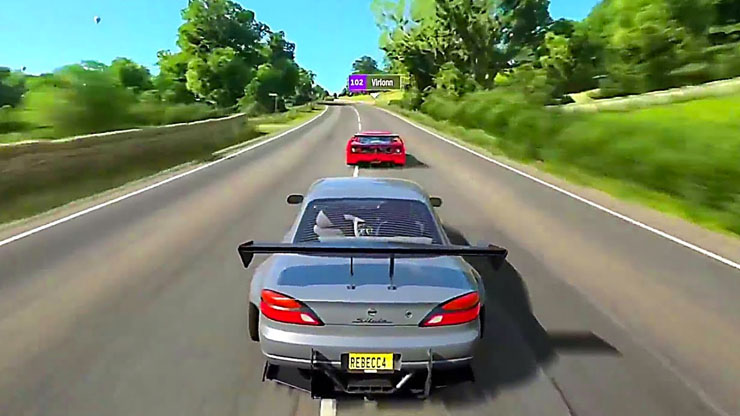 To fix this issue either braking or handling should play a bigger role (especially braking, it should have at least the same importance as acceleration), and that can be done by simply tunning driving mechanics to enable realistic acceleration and braking mechanics. Simply follow the example of Slightly Mad Games or Kunos Simulazioni, which both made acceleration less dominant in Project Cars and Asseto Corsa. In those two games you can pick a car that doesn't have the best acceleration, but if the car is excellent at cornering (has the best handling) or is superb at braking, it can compete with models that have better acceleration without any problem.

While this isn't something that can really become much of a bother, money prizes for winning races could be at least 30 or 40 percent higher. Sure, if you play all championships and aren't picky when buying cars in the sense that you don't need the most expensive ones for each championship, money prizes are high enough. And if you like multiplayer, the money can be enough to get all the cars you want.

But looking solely at prizes for finishing races that are part of the single-player campaign, they are a bit low. One solution is to get the Ultimate version of the game that comes with a VIP membership that doubles all prizes, but that can be a tad bit expensive for most of us. The second solution was the introduction of Race Mods, which were a great way to secure additional funds.

But it seems that Forza Horizon 4 won't have those because they are seen as a kind of loot boxes. And while prize crates containing random cars and driver equipment indeed were loot crates, Racing Mods cannot be considered as loot boxes. And it is a shame that the next Forza game won't have those because by using Race Mods you could practically double the amount of money gained from driving races, allowing you to get even the most expensive rides and have some money left on the side.

Each of the aforementioned issues isn't a dealbreaker and Forza games are amazing virtual driving experiences despite their downsides. But since most of those issues can be fixed in an extremely easy or simple way (like simply allowing players to pick the amount if times rewind can be used per race, or introducing an option to select any number of laps for each race) we hope that future Forza games will have most (if not all) of these issues fixed. And it seems that Forza Horizon 4 finally fixed those pesky Drivatar AI issues, which should make this one much better than its predecessor. In other words, making it the best racing game of this console generation. But you'll have to wait a bit for a detailed report, which should arrive in a week or so.