Published in Entertainment on 11th October, 2018

Just about everyone sees or hears about the big A horror movies that go through the theaters. While oftentimes these films have a large budget and plenty of big names, they can often be lacking something that makes for a truly enjoyable horror film. 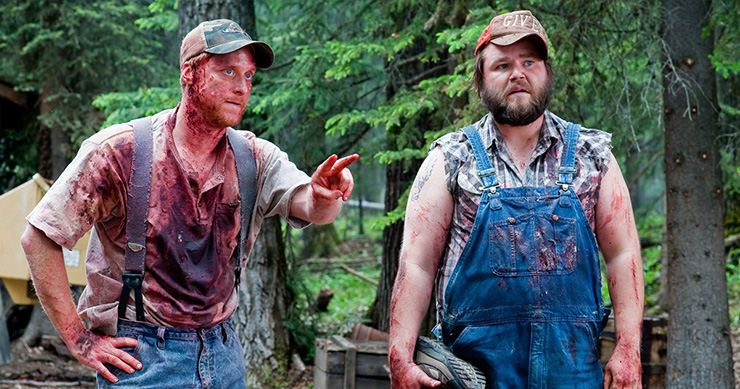 Whether it's a touch of campy humor, or the creativity needed with a smaller budget, sometimes B-level movies can provide everything we need for a great time. Or, they may just be so bad that we grow to adore them anyway. When you're preparing for your next horror marathon, make sure to add a few of these movies to your list!

If you're looking for a film with a lot of unnecessary gore, violence, partying college students and terrifying fish, Piranha 3D is a lot of fun. It's the perfect film when you don't want to think, and just want to see half-naked college students being torn to shreds, this is a great one to check out. If you'd like to double the fun, then consider adding the orgininal Pirnha film to the mix!

In this exciting film, a group of robotic security guards are introduced into a mall. While many are excited about this addition to keeping the mall safe, the robots take an unexpected and frightening turn. The robots go on a rampage, attacking every living thing they come across in the mall. This intense movie is surely a great one to add to your list of horror films to check out!

This is a great one if you're looking for something with a high entertainment value. It follows the students of Nuke 'Em High, who are subjected to radiation that results in some insane changes to the student body. Phyiscal mutations and a whole new outlook on life keep this film exciting, intense and even hilarious at some points. It's definitely worth looking into!

If you enjoy a bully revenge movie, Evilspeak is a good one to check out. The main character, Stanley, is the typical schoolkid, picked on by just about everyone at his school, turns to his computer for help. In return, he's imbued with the ability to cast spells on anyone who has wronged him with the assistance of technology. This one is sure you take you back!

If you're a fan of creepy clowns and revenge films, then Stitches is worth a watch! While this film does follow a pretty typical B-Slasher tropes, the death scenes themselves make this a movie that offers plenty of entertainment. From umbrellas to balloon animals, Stitches is a perfect campy, B-Level horror to suit the Halloween season.

Hatchet is an ideal film for those who are fans of gory slasher films. Much like the well-known villains, Jason and Freddy, Victor Crowley was subject to a horrific death. Burnt alive, he now stalks the swamps of New Orleans, causing many who enter it to disappear forever. If you enjoy this one, there are also sequels you can check out!

With murders becoming more frequent, a policeman by the name of John Brady begins to look into the matter. What he finds is that the recent murders all have one thing in common, a certain university professor who might be conducting distasteful experiments. Things get even stranger when he discovers that university professor is no longer alive, but somehow his experiments are getting more and more dangerous.

There's just one word to describe this film that will draw in those who are interested in the weird. Weresheep. While it might sound silly, these sheep have abandoned their usual grassy diet for the taste of human flesh, due to some experiments on them that have gone awry. Furthermore, those who are bitten by these sheep and survive, become something much worse.

If you're into dangerous little monsters from outer space, then check out this film! It tells the story of some carnivorous little furballs who are anything but cute. Landing in a rural area in Kansas, they begin to eat their way through the town. What makes these creatures truly creepy is that they're small enough to fit just about anywhere and attack when you least expect it.

Speaking of outer space, how about some outer space clowns? If you love a good, campy horror, then Killer Clowns From Outer Space should be on your list. While this might not be one of the most terrifying movies out there, the clown creatures within it are certainly sure to set off some creepy alarms! You'll likely want to avoid clowns after this one!

If you're a fan of The House Of Wax, you'll surely enjoy Tourist Trap. This film offers a similar premise, but in an entirely different way. From creepy mannequins to dangerous figures, this film is a nearly non-stop thrill ride. Though it is a little older, it's one that certainly has plenty of reasons for making this list!

A living, shapeless jelly can be a lot more terrifying than you might expect! Thanks to the 1988 remake, The Blob has never been more frightening. It's able to divide and conquer, melting anyone it touches. While it might seem silly, it's definitely worth a watch. Having made a number of improvements over the orginal film, you can expect The Blob to not only be watchable, but enjoyable.

Feast depicts the story of several strangers, trapped in a bar while a horrifying creature picks them off one by one. What makes this creature even more frightening is that it isn't just something that landed at random on the planet. It's actually a government experiment meant to be used on enemies. However, before that can happen, it needs to pass the test.

Worm-like creatures from outer space make this a film that is truly unique. As they explore their new surroundings, these critters take no time at all to begin secreting themselves into the bodies of unwitting humans, turning them into a special brand of zombie. This is a decent film if you don't mind something truly disgusting and campy.

From Beyond is a film that could easily be paired with other great 80s films like Re-Animator, Braindead and The Thing. It tells the story of a scientist duo who are testing out a device known only as "the Resonator". As an unexpected result, the head scientist is stolen by creatures from outside the dimension, only to return in a new form, seeking to hunt them down.

Bad Taste is one film that doesn't take itself too sesriously. This campy horror film is made with the help of the one and only Peter Jackson. In it we see the horrifying effects that can come from the Fast Food Industry on a universal level. Odd-looking aliens arrive on Earth, seeking to gather up plenty of humans for their Fast Food business. This one is a real thrill ride!

An invitation to a strange theater is what gets this film going. While it seems like it's going to be a lighthearted evening, things take an awful turn when a strange mask causes an injury to one of the movie-goers. Before long, it turns into a real distaster when the woman is transformed into a demon, attacking others and changing them into the horrific beings as well.

If you love horror films starring crazy families, then this is one you won't want to miss. While it is older, it carries a lot of the creep factor we see in similar films. It features three orphans with an odd genetic condition, which causes them to slowly lose their physical and mental falculties. This isn't one that many people are familiar with, but you're sure to be creeped out by it!

When an Elvis impersonator becomes bored with his aging life, he discovers a mysterious creature known as Bubba Ho-Tep, who is feeding on those around him. Instead of calling in younger reinforcements, he decides to take on the beast himself, looking great and protecting others. If that's not enough to interest you, then knowing that Bruce Campbell plays the starring role should!

Many of us are familiar with the Tremors franchise. However, if you haven't checked it out yet, then it's well worth watching at least the first one. This film involves carnivorous underground creatures known as Graboids, which feel the movements above ground and pull anything above onto their level for a meal. Starring the well-known Kevin Bacon, this is a hard one to go wrong with!

If you're searching for a wild ride, Re-Animator is a fantastic way to go. This movie offers a fantastic balance of disgusting, humorous and intense elements, all with the pre-CGI flair that we also see in films like The Evil Dead and Hellraiser. The story of a pair of doctors and a terrifying medical discovery send the characters to the depths of insanity, but will they return safely?

If you love The Evil Dead, Braindead is a film you definitely need to look into! The film starts off with a humble, typical man living with his overbearing mother. When she's attacked by a rat-monkey with a strange disease, the entire story becomes a twisted, gory fight to the bitter end. Prepare for a lot of ridiculous gore, humor and a truly dark story!

The Evil Dead (And Sequels)

The Evil Dead is one that many may be surprised to find is a B-level film. After all, it has gained such a huge following! However, at the time it was simply a lower-budget passion piece that ended up gaining a whole lot of popularity. That well-earned popularity goes to show that this is a film you cannot fail with. For a real thrill, make sure to throw in the sequels!

For those who can't help but love campy horror films, Tucker & Dale Vs Evil is a very enjoyable film. The hapless main characters, Tucker and Dale, find themselves in the middle of their very own slasher film, in which they are believed to be the slashers! If you're a fan of uneccesary deaths and teenagers basically throwing themselves at their so-called "killers", check this film out!

Night Of The Living Dead

This old, but gold film is one for those who want to see where zombies in films got their start. Though it might be a black and white movie, this is one that will keep your attention until the very end. The zombies are terrifying, the characters are interesting, though sometimes laughable, and the overall plot is intense and enjoyable. It's the perfect addition to any zombie movie marathon.