In the world of video gaming, the Roblox community stands out as one of the most creative and active. The user-generated MMORPG gaming platform, where players are able to design their own games within Roblox, and play other users' creations, remains extraordinarily popular, even eleven years after its release, maintaining 30 million active monthly players.

However, choosing the best Roblox titles to play can be a tough, given the literally millions of games published each year, amounting to over 300 million hours of play time. That's why PointsPrizes has ranked the best Roblox games, to help you navigate your way through the jumble.

By far one of the best graphics we have played in this platform, with great and realistic combat mechanics. And don't worry: the game never gets old, since it's constantly updated with new guns and maps.

You might not be fighting another player in Natural Disaster Survival, but you'll face a much tougher opponent: Mother Earth and her raging elements.

Be ready to survive any natural disaster you can name, from floods to earthquakes, but also hurricanes and tropical storms. With an oddly dynamic gameplay mechanism, run from every natural disaster and find shelter in a world that resembles Lego and Minecraft.

Developed by Badimo, Jaibreak is a hide-and-seek game about prisoners and police, and you can choose to start off on either side. If you choose the prisoner's team, your goal is to escape from jail by crawling under fences without getting caught. As for the cop's team, your job is to prevent the prisoners from escaping.

Once you escape as a prisoner, that's where the game really begins: you're officially a criminal, and you can now steal a car and drive around trying not to get caught, in a world full of possibilities. But remember that being a cop is equally fun: detain the fugitives with your guns, handcuffs and tasers.

Jaibreak's community is amazing. This game has been played by over 67 million people. This is an unmissable game.

(Update: It looks like this game was too scary, so the Roblox team have deleted it!)

You're in a dark and dirty room with nothing but a table and other players. A voice will announce several elimination-style games, until only one person is left alive. That's the challenge of Breaking Point, a twisted horror game created by Paradox, that combines Roblox with the Saw films.

The elimination-style games are diverse: from knife fights to psychological challenges, where "you loose you die". Furthermore, Breaking Point also has a loyal community, with over nine million people playing this game.

Welcome To The Town Of Robloxia

This is one of the most popular games in the history of Roblox - and probably the best roleplaying game available to players on the platform. 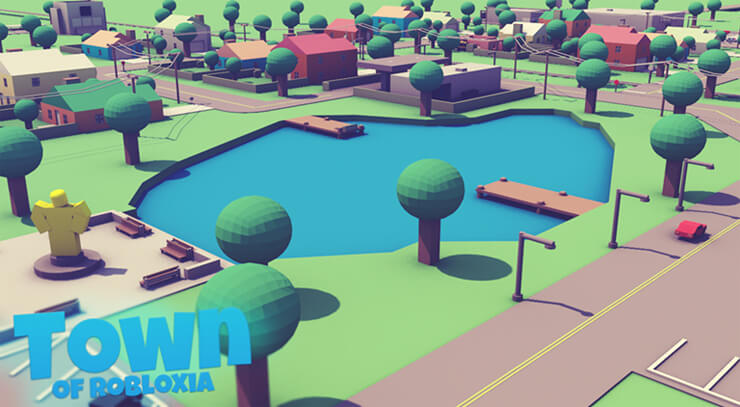 Developed by 1dev2, Welcome to the Town of Robloxia (WTTTOR) takes place in a fictional suburb known as Robloxia Town. From there, you can find a job, buy a house and roleplay with other users.

The game once held the title as the most visited Roblox games, until being surpassed by Base Wars: The Land. Welcome to the Town of Robloxia is currently the fifth most played game in platform, with over 18.3 million place visits.

In Work at Pizza Place you get to be the cashier, cook, box-packer, supplier or delivery person at a pizza place. It's a team based game, where you and other Roblox users get to work together in a pizzeria. Annoy costumers or satisfy them, that's your choice.

But the other half of Work At Pizza Place is what you can do with your wage. Build you own luxury house - just like The Sims - and attend parties in a parallel universe.

The game currently has over 404 million place visits and is currently the third most visited game on Roblox.

If running from zombies and other dangerous creatures is your thing, then this is your game. Apocalypse Rising is, undoubtedly, one of the best adventure survival games in Roblox, and has one of the largest maps, having over forty thousand bricks on a standard server.

The game takes place in a zombie apocalypse. One must eliminate the infected and hostile survivors, and build bases and vehicles. It has over 406,000 favorites, and is the most visited of all the zombie-themed Roblox games.

You can be a rifleman, sapper, officer drummer, pipe-blower or even a calvary soldier in a battle between Britain and France, set in the Napoleonic Wars. That's the premise of Blood & Iron, a first-person-shooter game filled with classes and strategies, where you rely on your teammates to win.

Even if the game is partially skill based, since some classes are superior to others, the combat system and sword animations are outstanding. From muskets to bayonets, and even swords and cannons, there's weapons for any taste.

The game is quite popular, frequently being displayed prominently on Roblox's front page.

This game's goal is plain and simple: build - albeit on a budget - your own Disneyland and please your attendees.

With over 32 million place visits, Theme Park Tycoon 2 is one of the best and most popular games in the Roblox universe. This game has an addictive element: you earn money from rides, stalls and entry fees, that can be used to buy decorations and expansions to your theme park.

Theme Park Tycoon 2 is a fantastic game where you can sparkle your imagination and be challenged by other online rivals. Try to climb the leaderboard and have the best Theme Park in the game.

Your Game, Waiting To Be Created

You might notice we've left our list one game too short. It's so easy to get caught up in other players' creations that you forget that Roblox opens up the creative process to everyone.

With a little practice you'll be able create your own Roblox games. And surely there's no experience more satisfying than playing your own game, which you created yourself!