The Very Best Will Ferrell Movies Of All Time

Published in Entertainment on 30th October, 2018

When we need some cheering up, something touching or just a few laughs, comedy films are a great way to do that. It's even better when they feature a comedian who is able to entertain us, take us away from our own stresses and bring us into a world where comedy is king. 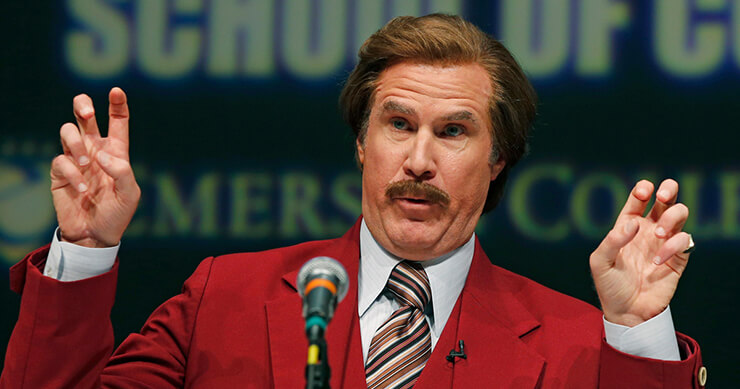 Will Ferrell is without a doubt one of the comedy greats, and he has been for decades. Generally, Will Ferrell films are a great option when you want some lighthearted comedy. When you want to laugh, check out the films in this list!

Most of us are familiar with the comedy that Will Ferrell provides, but what about the deeper feelings? This film follows Nick Porter, who is just a normal guy who suddenly loses his job, his wife, and the ability to get into his home. Due to the situation, he does the only thing he can to survive, which is to remain on the lawn until all of his tossed-out possessions are sold. This is one film that shows us just how rough it can be when everything we're used to goes down the drain at once.

When his father trades his son to another soccer team, Phil decides to take on the task of training what can be considered the worst kid's soccer team there is. Through hard work and long days, he works alongside the kids to create a team capable of taking on all others. This is a great story of personal growth and parental bonding, with a touch of that Will Ferrell humor. If you're looking to laugh and feel good, this is a great film to check out!

When their daughter heads off to college, the bills stack up! To answer the issue, the parents are convinced to start an underground casino right out of their home. With mishaps, hilarity and plenty of that Ferrell charm, this is a truly entertaining movie. It takes the lives of two normal parents and turns it completely upside down, exposing just how tricky the dark underside can be.

There's a reason Will Ferrell's sports movies tend to be so popular. He's one actor who is fantastic at playing popular, successful and ridiculous protagonists. However, in this film he doesn't quite start out that way. As a semi-pro basketball player, Jackie isn't quite getting the attention he wants, but he's having a great time acting as though he's in the big leagues. When you're looking for a good laugh, this one is absolutely worth checking out.

James isn't a tough guy, but when he's arrested for fraud, he's got to learn how to become one. Consequently, he turns to Darnell for some specialized training to prepare him for the time he'll be spending in prison. Though Darnell isn't the prison thug he portrays, he has to play it up in order to teach James how to handle himself. Through some crazy adventures and a whole lot of hilarity, you'll surely love watching Ferrell play it up as a gangster.

If there's one way to ease the minds of those otherwise worried about politics, it's this film. Ferrell squares off against a competing politician, resulting in some terrible trash-talking and a lot of insanity. These politicians couldn't be any more different, but they are similar enough to provide a lot of entertainment. By popping this film in, you'll be able to whisk yourself off to a world where politics can be humorous and enjoyable.

The tension between a responsible stepfather and a wild and sexy biological father is what makes this film enjoyable. While Ferrell plays a man who is responsible, loving and wants nothing more than to raise children, he cannot have them biologically. Consequently, he strives to be the best stepfather he can be. However, when tough dad Wahlberg returns to try to reclaim the family he made and abandoned, things get tricky and quite entertaining!

A Night At The Roxbury

If you don't mind something a little earlier on in Will Ferrell's career, then A Night At The Roxbury is a fantastic choice. While a pair of eccentric adult brothers still live at home with their parents, they dream of opening their own night club. While they may not be the brightest pair, they dream big and carry egos too big for their own good. This classic adventure is one that will remind you just how Ferrell got to be so popular.

When competing professional ice skaters are banned from single's skating, they are forced to work together to take on the world of couple's skating. With Ferrell's tough guy style and Jon Heder's boyish charm, there's a lot of clashing in this film that creates some fantastically funny situations. In time, they learn how to combine those features in order to compete against a strange brother-sister duo and take home the gold.

While he may not be the star, Ferrell makes for an unforgettable villain in the Zoolander films. Playing the stylish and sophisticated Mugatu, Ferrell plots to assassinate the prime minister using the dull-witted male model, Zoolander. This look into the world of male modeling is a silly, irreverent film that is great for popping in when you need a good laugh. From breakdance fighting to an inability to understand computers, you can't go wrong with this one!

Most of us are familiar with Ferrell's acting style, but he also takes part in some fantastic animated films as well. In Megamind, he plays a dastardly, if silly, super villain seeking to best his rival, Metroman. However, things take a turn when one of his plans actually succeeds in ending his rivel. Quickly growing bored with ruling an entire town, Megamind seeks to return things to normal. As a result, he ends up learning a very important lesson.

The Austin Powers films are hugely iconic. Though they have passed their time, these classics are still highly enjoyable to most viewers. Ferrell plays a smaller role in these films, but his character is extremely memorable as the henchman Mustafa, who just won't die. Just as we expect from Ferrell, he plays a character that is highly entertaining, and who will leave you quoting his death scene for years still to come. An Austin Powers marathon is always a great time!

Whether you're a fan of racing or not, this film provides enough entertainment to be enjoyable regardless. Ferrell is fantastic at playing characters who are used to having it all, and suddenly losing it. In this movie, Ricky Bobby is a Nascar racer who gets into an accident, resulting in some recovery time as well as some mental scars that he has to get over before he can race again. When his wife leaves him because he's no longer a winner, he's got to pull it together and discover how to be a true winner.

We're all familiar with the buddy cop films where a pair of officers dive into a dangerous mission, resulting in some awesome shootouts, explosions and more. However, what about the guys behind the scenes? In this film, two office-dwelling employees discover how to become real partners and real cops. This is a new take on the idea that being a super cool cop comes easily, and watching Ferrell and Wahlberg bumble through their cop careers is entertaining for all.

Buddy the elf is a little bit different from the other elves in Santa's workshop. While other elves are making toys and enjoying their activities, Buddy is struggling to fit in, quite literally. Ferrell does a great job of playing this Christmas loving elf who discovers he isn't actually an elf at all, but instead a normal human. As a result, he goes off into the land of humans to find his real father. When the world isn't exactly what he was hoping for, Buddy has to find a way to brighten up human life. This is a great one to watch during the winter holidays!

This is another great animated film where Ferrell does a great job of playing an entertaining villain. Lord business is an evil Lego character seeking to take over the delightful Lego world lived in by the protagonist, Emmett. Many of us enjoy seeing Ferrell do his thing as a villain, and this movie is one with a lot of great reviews, sporting a high rating by many critics. What makes this film even more inclusive is that it's a great option for the whole family!

It's not easy welcoming step-siblings into the family, and that's especially true if you're both 40-year-old men who live at home. When the parents of Brennan and Dale get married, they're forced to try to get along in a household together. While it doesn't start off well, they quickly become close friends and seek to start a band together. Through ups and downs, they learn how to grow up in their own way and discover what true brotherhood can really be.

Another older option, Old School is a hilarious adventure with a lot of great comedic names. Ferrell plays Frank The Tank, who is well-known for drinking, streaking and working on his muscle-car. He truly adds a touch of hilarity to this film that some still quote today. Overall, it tells the tale of an abnormal frat that has to square off against a petty dean who wants to see them close up shop. However, it's gonna take more than some tests to shut down this whacky group!

In this film, Ferrell plays Ron Burgundy, a famous news anchor. In a world when the news is run by men, the introduction of a a female co-anchor stirs things up quite a bit. In addition to that, a rival news group seeks to take over the spotlight. Only a man as brave as Ron Burgundy can take on all the new changes with grace and style. This is one you don't want miss if you love Will Ferrell at his best! It's definitely a film you can't fail with.

Even great comedic actors like Ferrell can take on roles that are a little more serious. In this film, Ferrell finds that his life is being narrated by a voice only he can hear. Not only that, but the narrator plans to kill the character off in the book she's in the process of making. Consequently, he has to go in search of his narrator in order to stop the death, and allow himself the chance to live and enjoy a better life.