Published in Gaming on 9th November, 2018

Tetsuya Mizuguchi, the mastermind behind timeless classics such as Sega Rally, Rez, Child of Light, and Space Channel 5, had a dream of creating a musical Tetris game as soon as he seen the cool-looking PSP back in 2004. He simply loved the fact the console featured a classic audio jack (it's so weird to hear this in this day and age when every piece of portable tech seems to try its best to cut all ties with the 3.5 mm audio jack), allowing players to enjoy high-quality audio in their games wherever they are. But back then it seems that making a Tetris game was much more difficult than today because Mizuguchi and his team simply couldn't get their hold on the rights for the game. So instead of creating a Tetris he changed direction and gave the world Lumines, another timeless classic. Not bad for a game that was basically a plan B. But after almost a half a decade he finally got the chance of fulfilling his dream. Tetris Effect is a game Tetsuya Mizuguchi dreamt of for years and it looks like the best puzzle game ever created for the PS4.

The game is set to launch on November 9th, with a limited demo available on the PSN a couple of days ago and we must say we are impressed by it. And you probably are asking "How can you be impressed, it's just another Tetris game?" Well, this one is a bit different. Tetris Effect tries to emulate the phenomenon of well, Tetris Effect, which is described as a visual phenomenon where people see falling blocks after long periods of playing Tetris. This game tries to make the effect stronger by implementing lots of various effects that transform a simple game of arranging falling blocks into a proper audio-visual extravaganza. 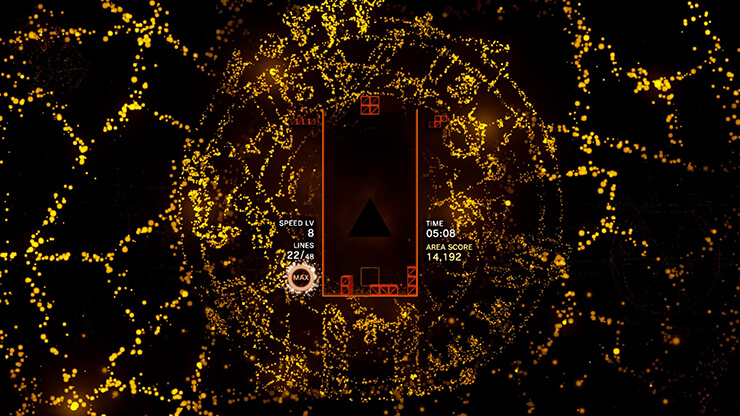 The game starts as just another Tetris game, with blocks falling and you trying to arrange them into lines that disappear when completed. But here, things are a bit different. Like in Lumines, each time you move or rotate a block a subtle audio effect is played but unlike in Lumines, the game isn't bombarding you with loud beats as soon as you start a level. Here, things start calmly. You move blocks, form a line and once it disappears the whole board lights up, new elements appear around it and music starts playing. And then, with each new line formed music slowly become louder and faster, perfectly in tune with events of the screen. And once you create your first Tetris (manage to form four lines at once) the whole screen explodes in a cacophony of special effects that include fireworks and many new elements suddenly taking form and the game really starts. 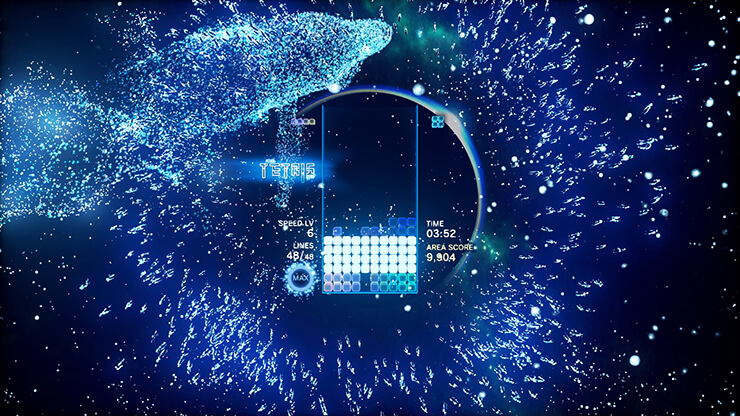 From then on the experience is much more similar to Lumines. Music is playing, the whole screen is alive with various effects taking place all around the playing board, and effects that trigger when moving and rotating blocks are everywhere because you do those two things constantly. And then, as you are near the end of a level, the featured track suddenly reaches its apex, with beautiful crescendo made out of ingenious beats and hooky choruses. The whole screen becomes one with the music and you are instantly relocated into another plane of existence where the Tetris Effect is the sole thing in your life. And that's amazing; it looks cool, it sounds cool and it really achieves in transforming just another round of Tetris into something truly unique and exciting.

The game, like Lumines, is based on different skins but here they are much more toned down and not in your face like in the legendary match-4 puzzle game. Here, the board is a black slate at the beginning of a level and it gradually gets filled with elements, some of them disappear after a while others stay but the common thing for all skins is the fact that everything is pulsating in perfect alignment to the music and your speed of creating new Tetris lines. There are many different skins, each unique to different levels presented in the game, and each features a different visual style of tetrominoes that is in line with the overall style of the skin and we must say that the game looks otherworldly beautiful in motion. You simply have to see to realize just how beautiful and enchanting it is. The demo comes with first three levels unlocked, which together create a whole that is meant to be played as a single level. After you complete it you get a grade and unlock the next section. The full game should come with 30 or so levels divided into sections made out of 3 to five levels. 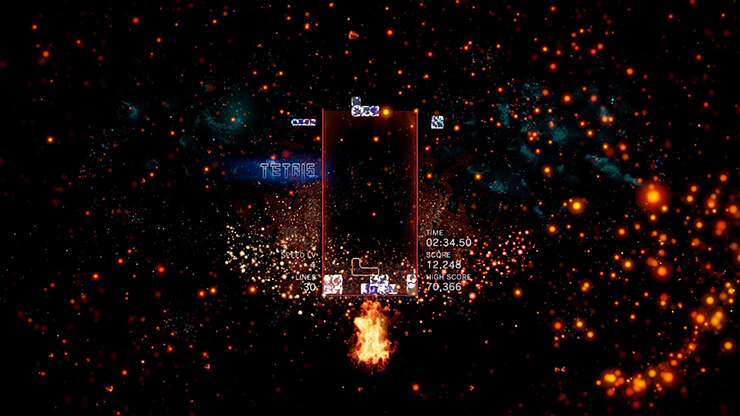 The one new mechanic that can be found in the game is the Zone. It triggers after you fill the meter by successfully completing lines and lasts for a limited time. Once the Zone is active blocks slow down and lines do not disappear but are moved to the bottom of the board. This way players can clear up to 18 lines at the same time and after the Zone ends all lines explode and disappear from the board giving out lots of bonus points. The Zone mechanic is a great way to clear the board during the latter part of the games when block falling speed becomes insanely fast. The game also supports global leaderboards for each level and each challenge mode and while it doesn't support multiplayer it should come with weekly global challenges that ask players to cooperate and earn points by playing specific game modes in order to unlock new skins and avatars.

Aside from the campaign mode Tetris Effect comes with a bunch of other game modes called Effects Modes that include classic modes like marathon but also come with cool new additions like calming modes played on skins that aren't filled with aggressive special effects, and also challenge modes like timed challenge where you have to achieve a certain score or fill a certain number of lines before the timer runs out or superfast challenge where blocks fall at an incredible speed. It's worth mentioning that Tetris Effect should look amazing in VR, for which the game is made in the first place. The view can be rotated revealing that blocks are, in fact, in 3D as well as the various visual effects so the experience should be much better when Tetris Effect is played in PS VR. And yeah, the game is a PS4 exclusive and at the moment there is no news of it being developed for any other platform. 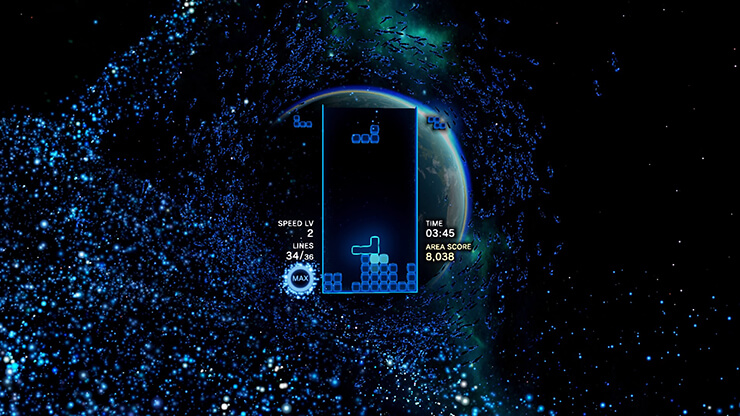 Tetris Effect looks and plays beautifully. The game is based on the simple yet addicting formula but with its list of new features and the inclusion of magnificent sonic and visual effects it looks and sounds better than any other Tetris game to date. And it features a solid campaign mode with lots of additional game modes found that should give you weeks' worth of fun with this beautiful piece of modern art that Tetris Effect really is. The only thing that may keep the game from becoming a smashing hit is its price. At $40 it's simply too expensive because despite its unique music-based gameplay and stunning looks this is just another variation of Tetris. Once it comes down to about $20 it will be by far the best choice for a puzzle game on the PS4.