How Much Money Does PewDiePie Make A Year?

It wasn't that long ago when we all heard the scandal that featured PewDiePie accidentally letting slip a racial slur on a live stream, and yet he's still got one of the most viewed channels on YouTube, with over 61.4M subscribers. That makes his channel the number one most-subscribed YouTube channel in 2018.

It seems that even though his career received a huge blow in 2017, when YouTube and Disney decided to cut all ties with him, he still managed to gain more followers this year, and continues making profit from his videos. But how much money is PewDiePie exactly making, and how much is he worth?

Before we get into this year's numbers let's first get a closer look at his career, and how he got to where he is now.

Felix Arvid Ulf Kjellberg or PewDiePie, as he's known to most of the world, is a Swedish YouTube star, video game commentator and comedian. His channel features him playing different games, accompanied by his reactions and comments as he plays them. He started posting YouTube videos for the first time back in 2010, and has gained a lot of popularity over the last 8 years.

His channel might have earned him $124 million since 2010 and he might be one of the richest YouTubers in the world now, but that was not the case back in 2010 when he'd just created his channel, and started posting videos on it.

Back then he had left college, was financially cut off by his parents, and was working on a hot dog stand. He still managed to find time to make videos for his YouTube channel, since that was always more important to him than anything else. Finally, his passion and his hard work paid off, and his subscribers were growing rapidly. In 2011 he already had 60,000 subscribers, and in 2012 he reached 1M subscribers and was ranked as the no. 1 channel on YouTube.

His net worth has grown a lot since 2012. He started making big bucks back in 2013, when he made $4 million, and became the first YouTuber to reach 15M subscribers.

Even more success followed him in the years to come. In 2015, he earned $12 million, which made him the richest YouTube star in the history of YouTube.

Not only was he making money from videos, but he had other sources of income as well. In 2015, he released his book, called This Book Loves You, which added to his net worth.

Even though he got a lot of backlash and criticism for alleged anti-semitism back in 2017, lost a lot of sponsors, got removed from Google Preferred List, and lost his Disney gig, he still managed to get back on his feet, and earned $12 million the same year. Although, a lot of brands didn't want to be associated with him anymore, he still remained a huge influencer in the marketing community.

He's got a huge audience of dedicated and engaging viewers, most of which are teenage boys, who still love and watch him, which is why he's still the no. 1 focus for brands whose primary target are males in their teens. He's making money out of their ads, and from promoting their products, but he's also using Instagram and YouTube to sell a lot of his merchandise, starting from hats, t-shirts, and hoodies, to chairs and headphones. 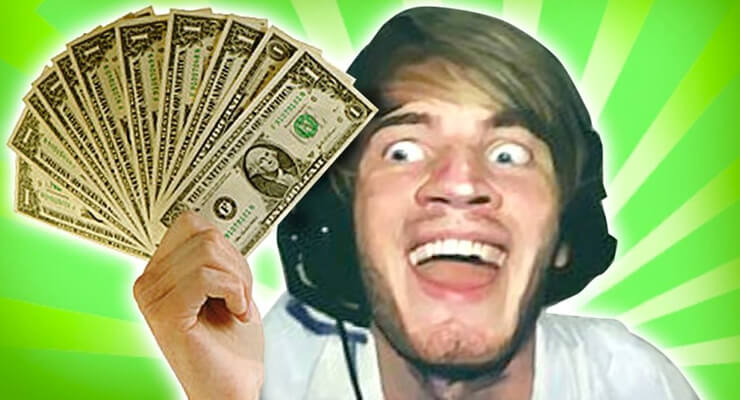 So How Much is He Worth Now?

Even though 2017 brought a lot of controversy for the boisterous Swedish YouTuber, as he lost almost 2 million followers, and got a lot of bad publicity, he still managed to climb his way back to the top, and after a short fall to no. 6 on the list of highest paid YouTubers of 2017, he's no. 1 once again.

People's outrage and anger over the scandal back in 2017 had a really short effect on his career, as he's still one of the richest and most influential YouTubers, and has partnered up with even more companies that before, earning around half a million dollars from each sponsorship deal.

He made up for the followers he lost that year, and gained a lot more new ones. He now has a whooping number of 61.4M subscribers, and enjoys a $12 million yearly salary.