When it comes to video games about the most popular individual sport in the world, tennis, things aren't as bright as with major sports such as football, American football, and basketball. These sports have a massive international following and a huge money industry behind them.

Also, team-based sports are more interesting to play because you have many different players, you can lead the whole team, there are transfers and ultimate team modes (especially the one in FIFA, which is the largest source of profit for EA for years now), live updates and lots of online game modes. 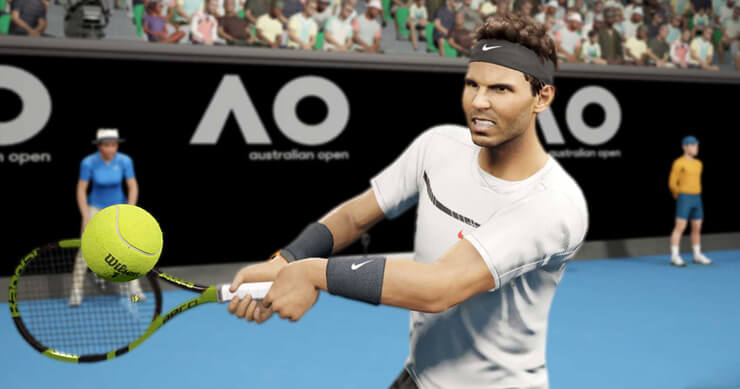 On the other hand, the big three in tennis hasn't changed in more than a decade. Federer, Djokovic, and Nadal are still dominating the court despite the fact that all three are well into their fourth decade and the similar situation is in women's tennis with Serena Williams. And big publishers simply aren't interested in releasing a big budget (or any budget) tennis game.

That led to tennis games becoming a sort of a niche where you either have to hunt for older titles that still rock, opt for an alternative like the recent Mario Tennis Aces or settle for playing tennis games on your smartphone because the market is flooded with tennis video games for mobile devices.

Fortunately there are still lots of quality virtual depictions of tennis out there and despite the fact you can't find any for current-gen consoles (aside from the Nintendo Switch, but more on that later) you can play quality titles in case you own a PC or some older console (PS3, Xbox 360) and if you think about getting last year's Tennis World Tour, don't.

That game is bad and it will stay bad no matter how many updates it receives. So, check out the best tennis games you can play right now on PC, consoles, and smartphones!

The king of arcade tennis games, Virtual Tennis dominated the market ever since the first game of the series got out for arcades and Sega Dreamcast in 1999. Slick controls, simple yet addictive gameplay, excellent visuals, and chunky career mode filled with cool activities (like those wacky mini-games that never get old) proved a winning combination.

Then came Virtua Tennis 2009 which wasn't on the same level as its predecessors. That one was quickly forgotten and in 2011 Virtua Tennis 4 brought back the original developer team that again made an excellent arcade tennis game.

The excellent roster that included biggest names in the sport along with famous retired players, simple gameplay that put the fun in front of skill and excellent career mode all contributed to the overall positive response from critics and players alike. Sure, the game is too simple to play and it (again) featured annoying music that made every single person mad after just a few games but Virtua Tennis 4 was (and still is) the best arcade tennis experience you can find out there.

If you don't like arcade games and want to play a game of tennis where skill, timing, and accuracy are valued more than smashing the ball as hard as you can then you should definitely check out Top Spin 4.

The game is pure simulation, with complex controls that ask for lots of learning but once you get the grips the game opens up and become a pure symphony of forehands and backhands, running from side to side, trying to place the ball as near the line as it is humanly possible, while at the same time trying to outsmart your opponent into making the wrong move. 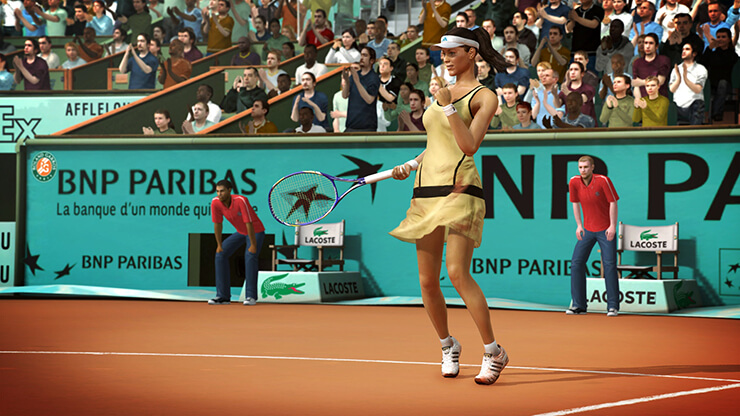 This is much more complex than a simple exchange of explosive shots sprinkled with occasional slice or lob found in Virtua Tennis games and can be much more enjoyable once you master Top Spin 4's controls.

The game features an expansive roster of players but since it came out in 2011 (like Virtual Tennis 4) do not expect young names like Zverev, Tsitsipas, Nishikori, Kvitova, Kerber, Halep, or Osaka. There are 25 players in total to choose from, which is quite alright. Another major difference to Virtua Tennis 4 comes in the huge number of licensed courts and tournaments that include all four Grand Slams and a selection of Masters.

You can also create your own player and play the game's interesting campaign mode that follows your player from the bottom of the tour to winning major tournaments (but it is less fun than playing Virtua Tennis' over the top career filled with wacky mini-games).

Graphics are okay, a bit less impressive than in Virtua Tennis 4 but with better animations. Ultimately, amazing gameplay and in-depth simulation are what makes Top Spin one of the best tennis games ever created and a must play for all tennis fans. It is a shame the game skipped PC because you have to either own or find a PS3 or Xbox 360 in order to play it. Sadly, this one isn't backward compatible and thus cannot be played on the Xbox One.

When Wii came out the console shipped with a selection of sports mini-games dubbed simply "Wii Sports". And while bowling was in first place when it comes to viral videos of people decoying their TV by trying to throw bowling balls as fast as possible, the star of every party was Wii Sports Tennis.

This simple game enchanted millions with its fluid motion controls and the fact that anyone could learn how to play it in just a couple of seconds. Some homes still own the Wii simply to play Wii sports tennis because this one still is a unique take on tennis that utilizes amazing motion controls that cannot be found in any other tennis game. And it all works so well that playing tennis against friends on the Wii can still be a superb way to spend a lazy weekend afternoon and at the same time get some physical activity.

Virtua Tennis Challenge was the first mobile game from the famous series and when it came out for iOS and Android back in 2012 it was a true masterpiece. Firstly, visuals were simply light years ahead of anything else and many simply couldn't play the game because it was just too demanding on the hardware. 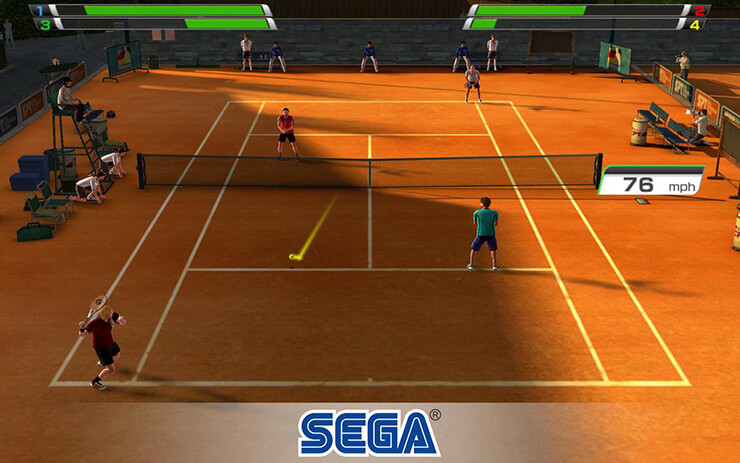 Even today, the game is one of the prettiest games available for mobile devices. Next, the touch gameplay where you simply tap on the screen to run and hit the ball felt unnatural at the beginning but after you would spend a couple of days playing the game you would realize that touch controls are definitely working for a tennis game.

And finally, Virtua Tennis Challenge presented an amazing career mode that put best things found in its bigger siblings and crammed them into a mobile game. The result was stunning with the game becoming one of the most popular mobile games and by far the most popular sports game for mobile devices. Six years (seven now) later Virtua Tennis Challenge is still a great choice for mobile gamers, but also for those who simply want to create their own player and transform them into a true tennis champion.

Mario Tennis Aces is promoted as an arcade tennis game but in reality, it is a fighting game where players use rackets and balls instead of fists, knees, and feet. Gameplay includes lots of special shots capable of smashing opponent's racket, making them lose the game and once you start playing you will try not to win points but to destroy your opponent with racket destroying explosive shots.

While not being a true tennis game, this one is still extremely fun to play. There are many characters from the Nintendo universe to choose from and they all come with their strengths and weaknesses. Graphics are colorful and perfect for this type of game and the inclusion of motion controls for special shots is spot on.

Mario Tennis Aces comes with a plethora of game modes with the inclusion of online multiplayer, which is great because you can play on the official Nintendo tournaments. You can unlock additional characters by playing single player modes and the best experience by far is simply playing the game with friends because this one is made for couch multiplayer.

Australian Open is one of the four Grand Slams of the year, one of the four most prestigious tournaments in the world of tennis and last year the organization decided to create and publish their own tennis game. The results were mixed. The console and PC version was pretty bad, with tons of bugs, lack of features, poor graphics and laughable animations.

Half a year later and more than 20 patches and this version of the game became sort of good but it still laggs behind Virtua Tennis 4 and Top Spin 4, especially when it comes to the roster, which is practically nonexistent in AO official game.

On the other hand, the mobile version of the game is one of the best tennis games you can find for your smartphone. Graphics are nice, gameplay is perfectly suited for small, touch-based screens, and the lack of real-life players isn't that much noticeable because the game's bread and butter is its career mode which is one of the best we found in a mobile game, right next to the one found in Virtua Tennis Challenge and World of Tennis: Roaring 20s. Excellent tennis games for mobile devices but in case you own console or a PC, be warned, it isn't very good.

This one is still pretty unknown in the world of mobile gaming despite its qualities. World of Tennis: Roaring 20s is one of the rare free-to-play mobile games that won't try burning a hole in your wallet, which is a huge plus. 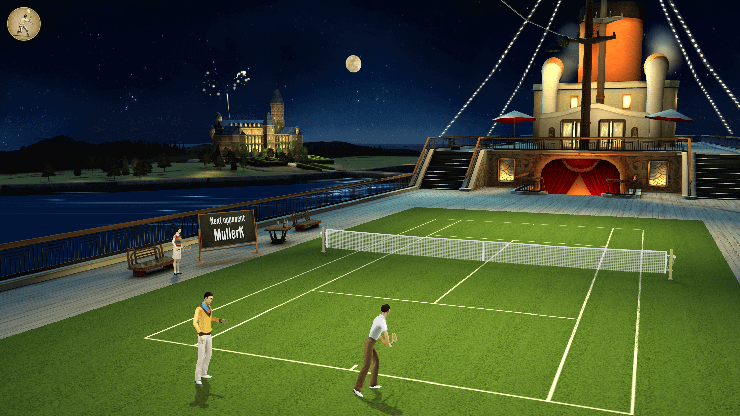 Next, it looks really pretty and while it cannot get close to the visual extravaganza of Virtua Tennis Challenge, World of Tennis: Roaring 20s is one attractive mobile game. You won't find any officially licensed courts or real players here; in fact, the name suggests the game takes place one hundred years ago when tennis was still an amateur sport, like most other sports.

The main part of the game is its career mode and we have to say that this is the best career mode we have seen in a mobile tennis game. It has everything you need to be occupied on a daily basis; slowly improving your player and watching them become better with each passing day. The downside is that World of Tennis: Roaring 20s features slower gameplay than other games on this list and that can put off some fans of the sport. But if you don't mind this you will discover a cute little game with amazing career mode.

This was one of the earliest smash hits on the mobile scene when it comes to tennis games and 3D Tennis still is one of the best games of the genre. Controls are accurate and by now they become massively better than in most other similar games, graphics are top notch, and gameplay is refined and offers the best tennis simulation on the market. If you want to enjoy a tennis sim on a mobile device, check out 3D Tennis.

On the other side we have an uninspiring career mode that's interesting to play at the start but after a while, your player becomes simply too powerful and the game too easy; you will win each tournament without breaking a sweat. At least the gameplay is excellent so after you get bored of the career you can still play a game or two in Quick Play mode from time to time.