Slay The Spire Is A Marvelous Triumph Of Game Design

Another Early Access indie hit that hits all the right spots and gives players one of the best card games ever.

I was among those who got Slay the Spire after the game just exploded on Twitch during the early days of 2018. I simply saw that a new game is among the most popular titles on Twitch and surely, I clicked on the icon and launched the stream with the largest number of users. 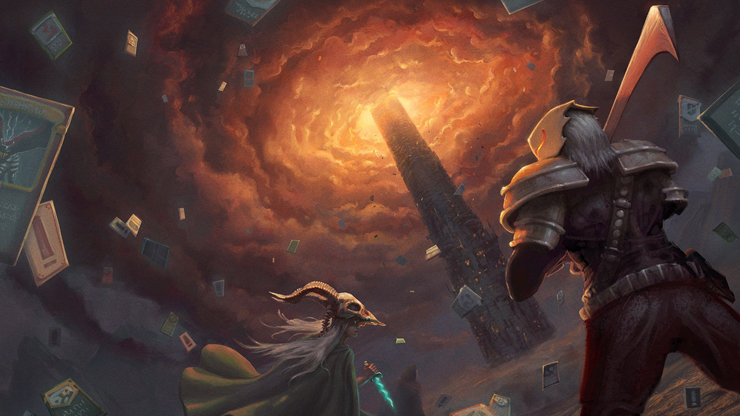 And what I saw was a not-so-good-looking game in which you battle amateurishly drawn monsters in 2D dungeons and where your whole arsenal is a deck of cards. And while I didn't like the looks I adored the gameplay. Even then, just a few months into Early Access, Slay the Spire hit all the right buttons when it comes to its gameplay design. You would slowly build your deck while trying to stay alive and reach the final level of the spire, and the combat combined with marvelous deck building experience were two strong points that sold the game in droves.

If you haven't heard about Slay the Spire the premise is quite simple. You start each run on the bottom floor of a huge spire, with each room presenting a unique battle encounter. You start with a basic deck that contains about a dozen cards and after each battle, you can pick one out of three cards to add to your deck (or you can skip picking a card entirely).

Each floor is mapped and you can pick one of the few possible routes, each ending with a floor boss, and each boss is quite hard to beat. There are regular enemies and there are elites that are more powerful but also come with better rewards. There are merchants to buy cards from and special events that are random and can be positive, negative or something in between.

Artifacts (awarded for slaying elites and once per floor found in a chest) carry various effects that alter the game, give you new powers, more mana to play cards, and sometimes they come with a price needed to pay in order to harness their powers. You can play as many cards as your mana allows but the game is all about creating card combos that carry powerful damage or effects. And once you get killed its game over because the game features permadeath.

Back when I started playing Slay the Spire the game featured two playing characters and each had access to less than 100 cards but the game was fun as hell because each run was a unique experience where you could go bust after just a couple of rooms or where you could hit the jackpot and build an undefeatable deck and then simply stroll to meet the final boss.

And this is where the game shines. In Slay the Spire the journey is everything with the destination (the final boss on level 3) being simply the cake given to you for your deck building skill. You play the game because you want to see which cards you'll get and how craftily you'll combine them; and sometimes it's more fun trying to survive as long as you can with a lousy deck that gets one poor choice of cards after another than rushing to the endgame with a deck that contains ultra-powerful combos. 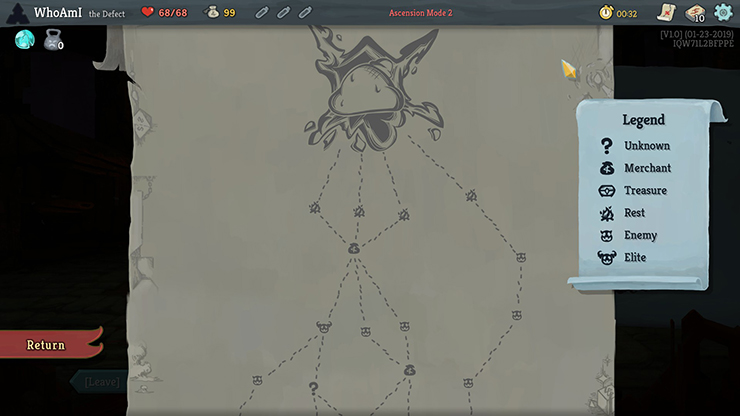 And as the game developed it got refined; art became prettier and more detailed, new cards were added that enabled even more combos and even tighter card synergy, new artifacts with interesting effects, more random encounters, new game modes that gave players even more reason to spend time in the bizarrely cute world of Slay the Spire, and we got the third character that is hella fun to play and the fourth level with super hard bosses for those who wanted the ultimate challenge.

The game got much better over time but the simple but effective (and super addictive) deck building experience was pertained and built upon with each new build of the game. Another excellent feature found in Slay the Spire is the game's three playable characters. Each one is completely different from the other two and each one is to be played with a different mindset.

The damage dealing Ironclad needs his damage dealing cards in order to create enormously high damage combos and playing with him is like playing an action RPG with a dual wield warrior build. You know that too many cards with block will prevent your deck to breathe and to create crazy combos that slice and dice and kill enemies after just a couple of turns.

The Silent is best when combining card drawing cards with some of its main strategies like poison damage or debuff effects but with her, you don't have to worry about having too much block cards because she usually needs a couple of turns to charge her DPS engine and for that, you need a solid blocking arsenal.

And The Defect and its orb mechanic is another unique beast where you think that every card offered is a solid one, which usually leads you to downfall. Instead, The Defect should build its orbs while at the same time has a couple of powerful defensive cards in the deck along with a few agro combos capable of actively chipping opponents health, letting orbs do the rest. But once you include artifacts in the formula, each strategy becomes free to modify because artifacts and their effects can turn your tactic upside down because they can allow characters some plays and effects that aren't usually possible with their respective cards. 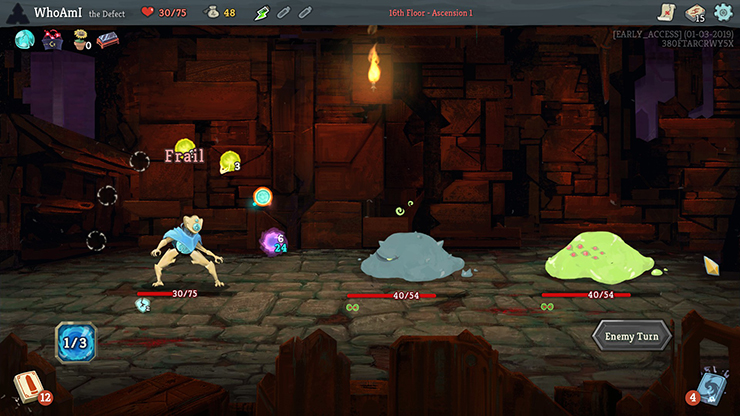 And when you combine almost 300 cards with three unique characters and a bunch of effect-altering artifacts you got yourself a mixture between deck building and a rogue-lite game that contains millions of potential strategies to play with, and the amount of fun to be had with the game gets close to infinite.

And it's great that players have a choice between all those different approaches that can be altered mid game because the game is pretty hard and it's useful to have a couple of potential strategies on hand. Because some enemies like to attack from the first turn and then gradually chill down with their slams; others are slowly gaining power and you have to deal with them fast or face their wrath; others rely on group tactics that beg for a couple of AoE damage; and there are some enemies that simply hit you with all they got turn after turn.

And since game over screen appears as soon as you get killed having just one viable deck strategy won't get you far because sooner or later you will meet a foe that will simply destroy your deck and you with it. Enemies don't play cards; they simply attack each turn or play buffs or debuffs and the game always notifies you what they will do next with small icons above enemy heads. And this small detail is quite important because it allows you to plan your moves accordingly, always knowing what you should do next.

The game is hard but since you can reach the final boss in little under an hour and a half you will always start a new run because there isn't much to lose. At worst, you will spend a bit over hour in-game but that time won't be wasted because each run is filled with new discoveries about different cards, combos, synergies, and strategies.

Over time you probably won't become ultra-skilled player who can literally turn led into gold - in other words turn any crappy card combination into a winning combination - but will definitely learn how to make the best out of any situation and some of them can be really bad thanks to the ever-present RNG. I don't like the fact that RNG can sometimes end a near perfect run but that happens quite rare.

Usually, it's your own mistakes that lead you to the game over screen. Bad card picks, greed leading you to take the hardest path even though your deck isn't tier one, an innocent misplay with horrible consequences, or desire to upgrade as many cards as you can leading to a boss battle where you start with just a couple of HP points. The number of ways you can sabotage yourself is almost as large as the number of potential strategies making every loss a moment to remember, spending a couple of minutes after each defeat thinking about the moment when it all went south. 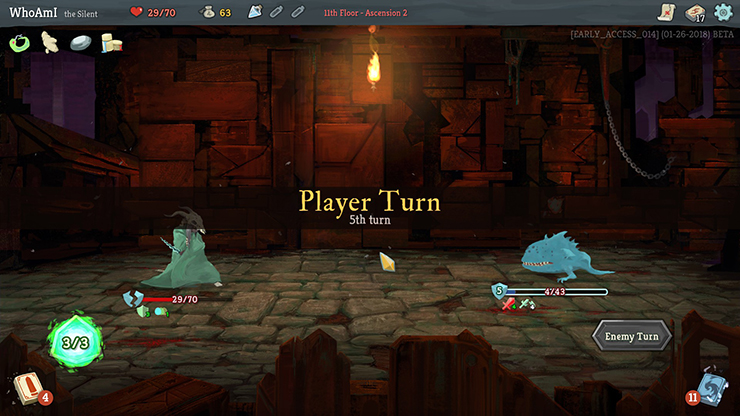 Aside from the occasional RNG kick to the face Slay the Spire doesn't have any major weakness. Visuals could've been better but they give the game undeniable charm and original looks, allowing it to stand from the crowd. And as another bonus, simple visuals mean minimal hardware requirements, letting anyone with a PC from the last decade (or even older) to play the game.

Next, we would like to see a couple more floors as part of the main game. Sure, three acts plus the short but brutally hard fourth one are short and sweet, making it easy to return and try to reach the end just one time but it would be cool if developers implemented a longer game mode that would really put the player skill to the test.

At the moment the main source of entertainment is discovering new decks and strategies and trying to beat your high score by taking increasingly riskier runs. Also, the game has a poor variety of random encounters; after just half a dozen runs you'll probably see every one Slay the Spire has to offer.

Slay the Spire is a marvelous triumph of video game design, a title proving that loot boxes, a bunch of DLCs, bunch of random loot, and other strategies implemented by AAA video games to increase their addictiveness aren't required in order to make an extremely addictive game.

Sometimes, a bunch of cool cards combined with challenging but rewarding combat, and a couple of nice game changers in the form of artifacts and random encounters is more than enough to ensure that you will return to the game, again and again, searching for the knowledge that will allow you to finish each run triumphantly. The thing is, that's pretty much impossible to achieve meaning that most of us will keep playing Slay the Spire till the end of our days or till someone creates a better version of this highly successful marriage between a deck builder and rogue-lite; whichever comes first.