It might come as a surprise to you, but we're still playing Skyrim in 2018. Whilst the base game is getting a little old at this point, if you pick the right mods, Skyrim never gets boring. We've picked out 8 hardcore Skyrim mods that'll completely change the gameplay experience.

If you're up for a true challenge, we'd recommend installing all of these mods and using them together. Completing Skyrim with these mods on is not only difficult, but it's incredibly immersive.

Frostfall is one of the most hardcore mods you'll ever get your hands on. With Skyrim having such a cold climate, it makes little sense that there aren't any gameplay mechanics that are related to the cold. Frostfall changes that by making the cold a treacherous place to be.

You'll need to use the new camping and clothing items in Frostfall to keep yourself warm. If you stray into the cold for too long without warmth or walk around in wet clothes, your character will slowly start to die from hypothermia.

Realistic Needs and Diseases completely changes Skyrim in more ways than you can imagine. With this mod, you must work extra hard to keep yourself healthy. You must keep yourself hydrated and make sure you're well fed and well rested. 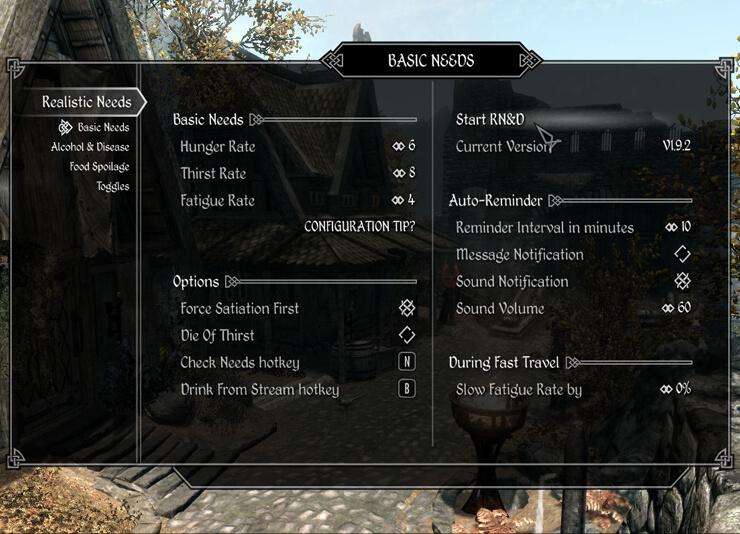 You'll receive benefits for staying on top of your needs, but if you lose track, your character will be given a number of negative ailments. To make things worse, you can also contract a variety of realistic diseases that can make gameplay even more challenging.

Whilst Immersive Patrols doesn't add any direct hardcore survival elements to Skyrim, it does help improve the overall experience when used in conjunction with other mods on this list.

Immersive Patrols is a mod that adds Stormcloak, Thalmor, Imperial, Dawnguard, Skaal, Reaver, and Riekling patrols all across the game world. You'll find groups of these factions walking around regularly.

When these factions come into contact with each other, they'll engage in combat. It's up to you whether you want to support your side of the battle, or go about your day, but either way, Immersive Patrols adds new gameplay elements to engage with.

Run For Your Lives

Ever noticed how absolutely everybody pulls out their weapons when a dragon is nearby? Not only is this a little unrealistic, but it makes fending off a dragon a bit too easy at times. With the Run For Your Lives mod, all civilians will run indoors or run for their lives if a dragon is nearby. 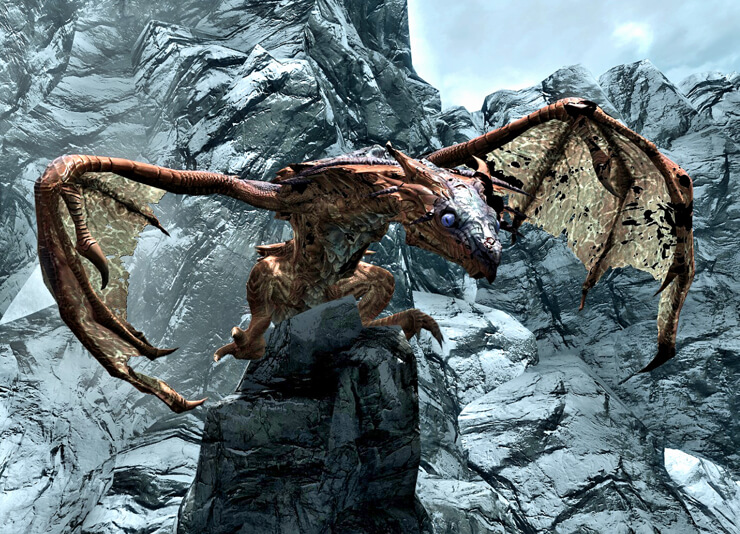 With this mod, you'll only have yourself, nearby guards, and any followers you have alongside you to help you take down dragons.

Rebalanced Leveled Lists is a mod that balances out gameplay a little so that it's not too unforgiving. With this mod, the loot you'll get for killing an enemy or opening a chest will scale based on the difficulty it took to get the loot. For example, killing a dragon will actually be worth your while, and fighting through challenging dungeons will reward you with better items. 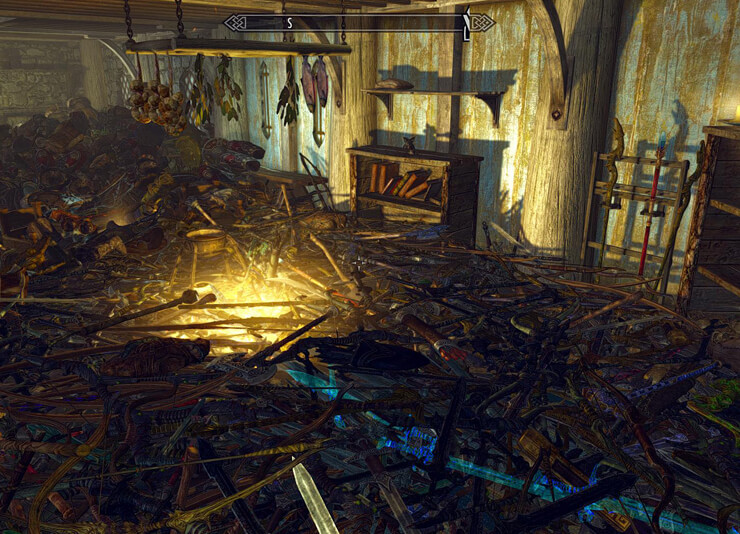 On the flip side, killing mercenaries, bandits, and guards won't be as rewarding, so you'll have to work extra hard to get hold of food, gold, and supplies.

The Cutthroat Merchants mod makes it far more difficult to make money by selling items. Merchants will charge higher prices and take less money for your stuff. To get better prices, you can level up your Speech skill.

Wildcat is a combat overhaul that makes the combat in Skyrim more realistic and more challenging.

Not only does Wildcat make combat more challenging, but it stops it from being a bore. With Wildcat installed, AI will attack you with more force and aggressiveness. You can sustain injuries during combat that can impact the way you move and fight, and you will also stagger or be stunned when an enemy hits you with a hard hit. 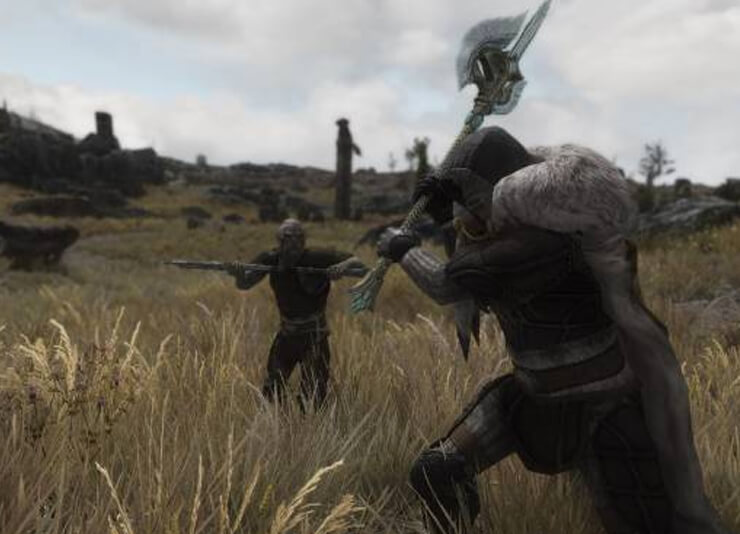 There's also a larger focus on stamina with the Wildcat mod. Hitting an opponent uses stamina like the base game, but the mobility and damage you can do is limited. Your stamina and Magicka regeneration is also limited when you're at lower health.

You can also receive a spine injury that will make you receive twice as much damage from attacks.

Thankfully, all of the features added with the Wildcat mod also apply to the enemies you are fighting, so you can use it to your advantage by targeting certain limbs.

SkyTEST makes walking through Skyrim far more dangerous. With SkyTEST installed, a number of new behavioral changes are made to all animals.

Overall, all animals are more difficult to fight against. Bigger animals like saber cats, bears, and mammoths will have a chance to knock you down. Animals will also flee when they're close to death, just like they would in real life.

All animals are also scared of fire, so you can use it to make animals more hesitant about attacking you. The level of fear animals will have from fire depends. For example, you could pull out a torch on a deer to scare it away, but a mammoth might not be as bothered by it. 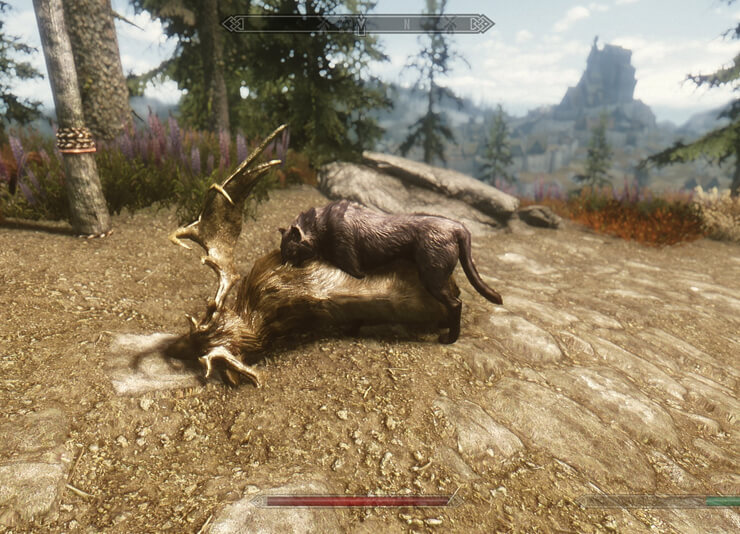 Predators that fight in packs, such as wolves, will now get better stats and confidence if they have higher numbers. With higher confidence, animals will be more likely to fight to the death and less likely to flee.

SkyTEST also boosts the wildlife population in Skyrim and makes it possible for animals to breed and to fight amongst each other.

What are your thoughts on these hardcore Skyrim mods? Are there any in this list that stand out to you? Alternatively, would there be any mods you'd take out of this list?