Published in Entertainment on 23rd April, 2019

Few out there haven't seen one of Quentin Tarantino's films. They definitely have a special flavor that sets the films apart from anything else on the film scene today.

In addition, these films are known to combine several different cinema styles, ranging from the martial arts movie to the spaghetti western. 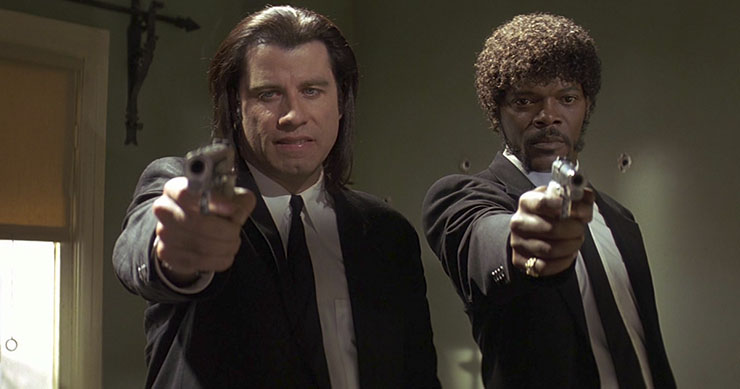 Tarantino also does a great job of taking themes that may start our somewhat standard and takes them in strange, new directions.

This often includes conveying that things like revenge can be much messier than they may appear. There are also many who favor these films because of the incredibly cool, wise-cracking protagonists who know just how to bring down the bad guy (or girl).

When you're in the mood for something mind-bending, we've got the list for you! The following movies are ranked all the way up to the best, and we'll include some important details about the plot of each. You'll have no trouble at all finding the one that suits your mood!

It takes six to carry on the perfect heist, but what if they were to run into an ambush? The possibility of a traitor keeps the survivors on their toes and suspicious of everyone around themselves.

You're sure to be on the edge of your seat as you follow their efforts to find out why their plan failed.

Featuring Steve Buscemi, Harvey Keitel, Chris Penn and much more, this is a film that has gone down in history as one of the greatest and some of Tarantino's best work. It's definitely one to check out if you're looking for something that will take you on a crazy ride!

Twists and turns are the name of the game in this film. Jackie Brown, played by Pam Grier, is a flight attendant who is caught in the act of trying to smuggle money. Instead of taking her down, Agent Nicolette and Detective Dargus seek to offer her a deal in return for her help.

While it may seem like she's caught between a rock and a hard place, Jackie Brown decides to forge her own path, filled with twists that leave both sides of the issue confused and betrayed. With the help of Max Cherry, she seeks to find a way to keep all the smuggled money and leave her problems behind.

Bounty hunting can be a tough job. There are no laws dictating that other bounty hunters can't try to cash in on a criminal you put the work into capturing. You may even find that your life is placed in danger in the process.

In The Hateful Eight, A bounty hunter known as "The Hangman" finds himself in this very situation.

When the storm forces The Hangman and his charge to take shelter from a blizzard, they find themselves trapped alongside six other strangers who's intentions no one can be certain of. If you're a fan of violence, grit and some truly tense western personalities, this is the one for you.

The journey for The Bride isn't over, and in this film she seeks to complete the revenge she sat out for. Having made some decent progress in the first Kill Bill film, she now sets out to find the source of her problems, Bill. Working down her list, she eventually makes it to Mexico in search of him.

Starring Uma Thurman and David Carradine, fans of the first film are sure to enjoy the continuation of the journey. With her enemies dwindling, this film is sure to reach a climax that will keep your eyes glued on the screen. Make sure to add it to your list of Tarantino movies to binge!

Revenge can be such a satisfying thing, especially when it's enacted against one of the most horrible groups in history.

In this film, Officer Also Raine seeks out the perfect men for a special force of Jewish soldiers with their own unique ways of handling Nazi soldiers, which includes special rewards for those willing to not only kill off the soldiers, but also remove their scalps.

Working alongside a well-known actress who suffered the loss of her family due to the Nazi soldiers. As she guides them through the ladder, the group faces challenge after challenge until things get tricky.

If you're familiar with Tarantino movies, you'll know it's worth waiting for the end.

What might a stunt man with a magically "Death Proof" car do in his free time? We would be lying if we told you he's not using that power for anything nefarious.

Tracking down various groups of women, the charming Stuntman Mike manages to have an easy time gaining attention of the women he chooses, and they pay heavily for it in the end.

When Mike comes across Zoe, Kim and Abernathy, he may find that he's not quite as invincible as he once believed. Starring Kurt Russell, Vanessa Ferlito, Rosario Dawson and more, this movie is truly one wild ride. Horror fans can also keep a look out for Eli Roth!

Kill Bill is a unique mix including tones from a variety of different kinds of cinema, including westerns, martial arts films and naturally, grindhouse.

As a woman known as "The Bride" is on her way to happily-ever-after, she's taken down by her previous boss and boyfriend, the infamous Bill. Expecting her to be dead, Bill and his assassination squad go on about their lives.

Little do they know, The Bride isn't finished. Resolving to get her revenge at any cost, she aims to take down the assassination squad as well as Bill himself.

Starting with Vernita Green, The Bride is off to right the wrongs that were done to her with the help of any weapon at her disposal. This is one revenge film that will stand apart from others in its genre.

You may be starting to notice a running theme within this list. Tarantino is certainly known for creating films with a lot of satisfying revenge. We've seen revenge against those who have personally wronged a character, revenge against one of the most hated groups in history, and now revenge against another terrible group, Southern slaveholders.

Starring Jamie Foxx, Leonardo DiCaprio and Christoph Waltz, this is a fantastic ride alongside an ex-slave and a bounty hunter in which we get to see revenge taken on those who treat humans like animals. If nothing else, you're sure to enjoy the ride as Django takes his revenge.

Pulp Fiction has become a well-loved piece due to the ability of Tarantino to weave together several different plots into one fantastic story. A pair of hitmen, their boss and his wife, a couple of thieves and a boxer past his prime all play vital roles in this story, though they may seem unrelated.

This is also a film that includes some big names, such as Christopher Walken, John Travolta, Bruce Willis, Samuel L Jackson and much more! There's certainly a reason why this film has such a following. If there's any Tarantino film you should absolutely check out, this is going to be the one!