Current State Of Red Dead Redemption Online (The Good, The Bad And The Gliches)

Red Dead Online is one of the latest online games that has created a buzz in the gaming world. Although it may have experienced a bumpy start, game developers continue to work to improve the overall experience.

If you haven't played it just yet, we'd like to help you with deciding whether or not it's the game for you by taking a look at the state of Red Dead Online as it stands currently, including the good, the bad, and those entertaining-if-glitchy experiences. 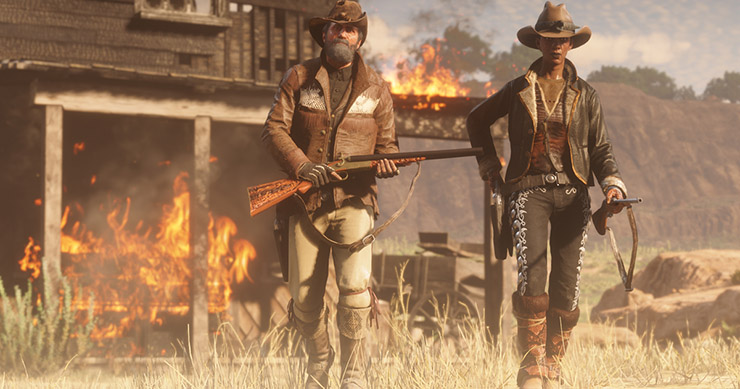 Read on and enjoy!

Depending on where you look, you may find that some Red Dead Online players are a bit more forgiving, while others will claim that the game is simply unplayable. In an effort to keep things balanced, we want to start by sharing what good things you can look forward to in-game.

If there's one thing many of us wanted in the single-player campaign, it's the ability to roam the world of Red Dead Redemption with a character of our own creation.

Red Dead Online makes this a possibility by offering a character that is nearly fully customizable within the limits of the old west.

Whether you want to make a character that is cool, suave or downright silly, this game makes it possible. You can design your character to fit in with just about any group of people already existing in the world, or you can create someone who is wholly unique.

It's completely up to you do create the perfect being to experience the world with.

As you travel around the world helping strangers, you're likely to recognize some of those strangers from the single-player campaign. It's always nice to see a familiar face in a land that may otherwise seem friendless, largely due to the timing difference between Red Dead Online and the single-player storyline. 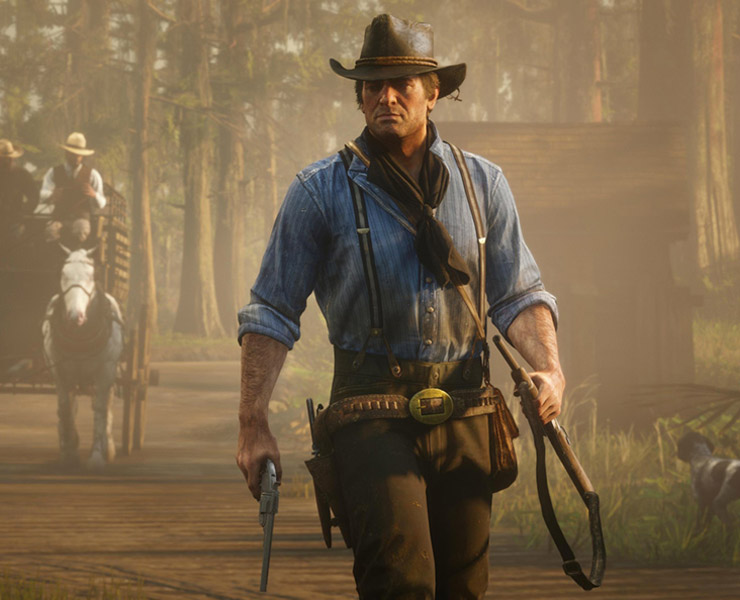 So as you're playing, don't forget to visit any strangers you see on the map! We won't spoil exactly who you might see while you're playing, but it's always nice to see the beloved characters you enjoyed while you were in the role of Arthur Morgan.

The ability to create a posse is one that adds tons of fun to the overall game. You can opt to play with strangers or friends, temporarily or permanently. There are many already playing who enjoy sharing the exploits of their posse and experiencing all the activities you can take on as a group.

This also means that your entire posse can either be a help or a hindrance to those around them. You may choose to create a vicious gang, bent on taking out other players, robbing wherever possible and causing havoc.

On the other hand, perhaps you prefer to ride around helping people, stopping gangs and collecting bounties. Or, maybe you just want some fishing buddies!

Say what you will about the gameplay itself, but the world of Red Dead Online is undoubtedly a gorgeous one. Whether you're in the desert or up in the snowy mountains, there's always beauty around to enjoy. You may find that you just can't stop taking in-game pictures and screenshots. 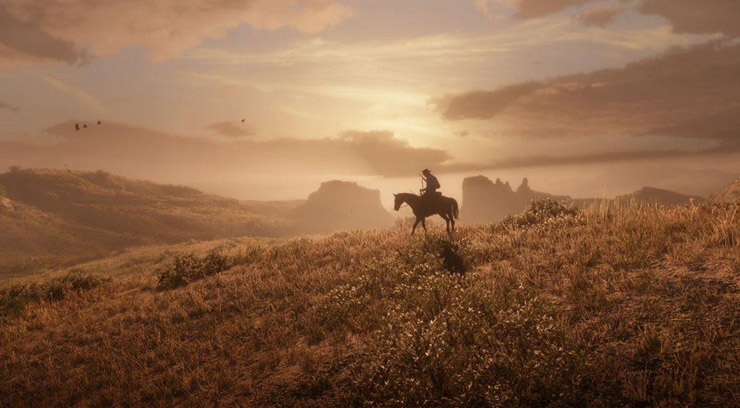 If nothing else, it's worthwhile just to explore the land and soak in everything it has to offer. It's a great way to get out into nature without ever leaving the comfort of your couch. While you're at it, you might as well hunt down some food or cast a line!

Your Own Unique Story

You have choices while you're in the world of Red Dead Online. Largely, these include the kind of person you want your character to be. Do you plan to uphold the law, or take on any job that will bring you money, regardless of how dishonorable you may be?

Different choices, when made in abundance, can effect the role your character takes on.

As you gain or lose honor, you'll have opportunities for different missions, making your experience quite unique. Additionally, you can create posses that are known for either high or low honor as well, allowing you to team up with other players with common goals.

Clothing options are ever-growing in Red Dead Online. Whether you want to aim to be a dapper gentleperson, a rough-and-rowdy cowboy, a rugged hunter or just a common ruffian, you'll be able to find choices that suit your tastes.

On top of that, there are more customizable choices that you can make use of when you offer up gold in return rather than standard money. While this may be a more expensive option, it's one that allows you to really design a character that stands out and fits the exact look you want them to have.

Another aspect that can contribute to your customization is your horse. When you enter the stables, you'll be able to choose from a wide range of horse breeds and colors. Whether you want something small and fast or large and bulky, you'll be able to find the perfect noble steed. 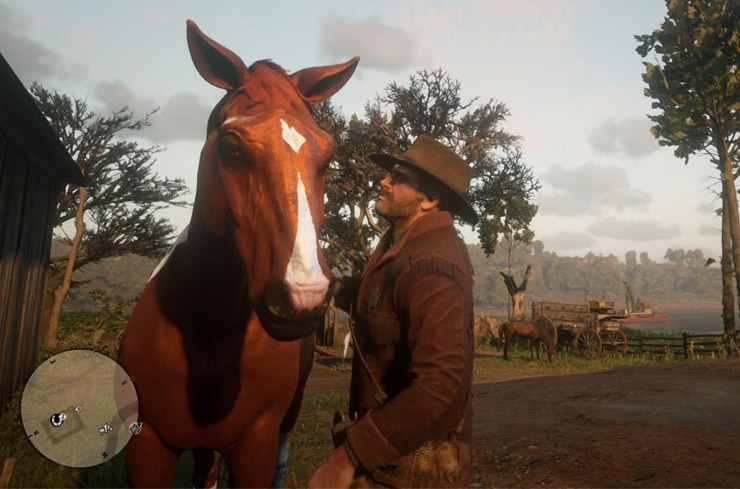 Additionally, you can customize your horse's saddle, right down to the stirrups, as well as the style and color of their mane and tail. That said, keep in mind that horse options can be somewhat limited until you get up into the higher levels, but the larger range of options is a great reward for hanging in there!

A Ride Range Of Hunting Options

Just about all of the animals you can hunt in the US in real life are also included in Red Dead Online. That means, you can hunt down nearly anything you may choose, from prey animals like deer, bison and grouse all the way to intense predators like bears, wolves and even alligators.

Additionally, you'll have the ability to follow animal tracks, allowing you to track down exactly the animal you want. Just be careful, as predator animals will try to turn the hunt around on you, and they can be quite successful.

Numerous Things To Do

In addition to the storyline quests, you can also find a wide range of other things to do in the game. There are a multitude of side quests that you can accomplish either for good or evil.

You can also hunt, fish, try out the showdowns or races, get a haircut, play some poker or just explore the world around you.

Because of this, you're unlikely to get too bored with the world overall. Even if the standard in-game options become tiring, you can always watch the antics of other players or join in on the fun if you so choose.

In addition to the positive aspects, there are a few areas in Red Dead Online that aren't as strong as we would like. However, keep in mind that this is a game currently being worked on, so there is a possibility that many of these issues will be resolved in time.

Just like with any online game, opening up the world to the public means that not all players are going to enjoy the game in the same way. While many may just want to play out their quests or go fishing or hunting with friends, some prefer to find their fun in watching the world (and other players) burn. 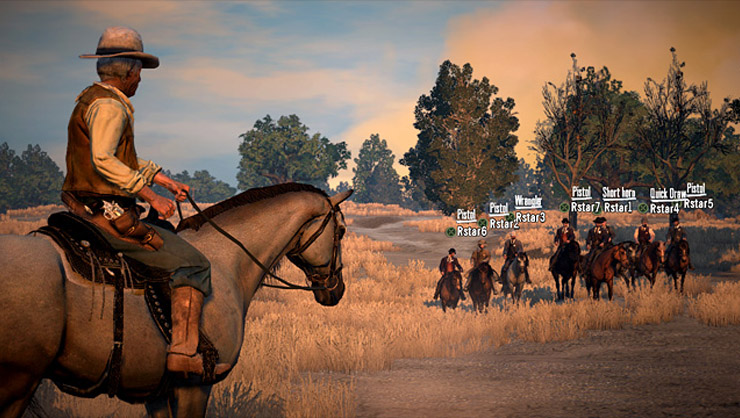 That means that you will be likely to run into players who prefer to kill and rob. That may include attempts at killing you, sometimes repeatedly, or it may mean they take to killing all of the NPCs in a given town just for the fun of it.

One of the stranger aspects of Red Dead Online is that even though you can give your character a name that fits with the world, it isn't what's displayed to other players. That means that as you walk around, you will see usernames of other players floating above their character's heads.

If there's one small thing that would aid in allowing this world to be more immersive, it would be the ability to see the character's actual name rather than a crude PS4 or other console username when just walking around the world.

While many enjoy the horses within the game, there's no denying that controls while on horseback can get a little tricky. Lassoing enemies while on your horse can be tough, and aiming weapons can sometimes be difficult, especially if those enemies aren't easily within view.

Furthermore, horses tend to get spooked when a predator animal is nearby. In itself, that makes perfect sense. However, the camera tends to move in the direction that the horse is looking, which is towards the predator rather than on the road.

This can make it tough if you'd prefer to run from predator animals rather than taking down every single thing that chases you.

While some may love the different showdown game options, such as Hostile Territory, Shootout, Most Wanted, Make It Count and Name Your Weapon, others would argue that there is too much focus placed on these smaller mini-games and not enough on the main storyline or world. 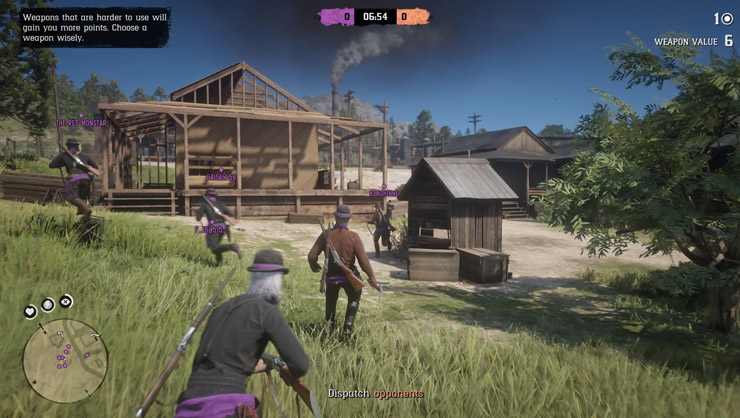 Because of this, some may find that things like glitches occur too frequently, disruptive players are less regulated than they may hope, and the plot for your own storyline isn't as fleshed out as you may like. Ultimately, this is going to be up to each individual player.

For those who are interested in trying out Red Dead Online, it's worth noting that the storyline at this point is not quite as intense and immersive as what you'll find in single player. Part of this may be due to the game still existing in open beta, so there is hope that more additions will be added.

At this point, you may find that there are lulls between storyline quests, and that it's not as easy to become attached to story characters as it is in single player. That said, it's a little bit tougher for an online game to provide the personal touches most players are looking for.

One of the largest complaints of the general public is in regard to the various glitches that can occur throughout Red Dead Online. In some cases, these glitches may just be strange and goofy problems with the graphics and characters, such as horses sinking into the earth, or players being shot up into the air at random.

However, other glitches can be more troublesome. Some players may find that pelts and other animal parts they worked hard to hunt down either disappear or can't be sold for some unknown reason. Some players may also notice expensive custom outfits disappearing from their person.

Finally, there can sometimes be problems with story missions getting stuck, unable to load past a certain point. While the game is certainly worth trying out, it's a good idea to be aware of these current issues and reporting them so that the game developers can work on solving the problems. 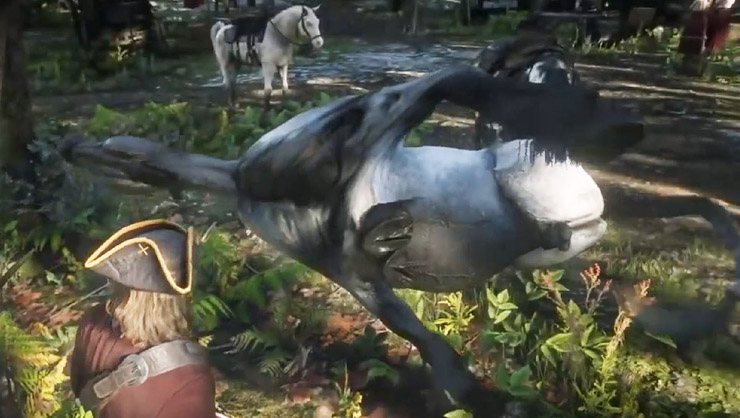 Most who play Red Dead Redemption 2 will agree that it's an amazing, immersive game that they want to get lost in for hours.

That kind of experience is something that can be true for many single-player games, and it's something that online games just can't bring to the same extent. This isn't a fault with Red Dead Online itself, just the fact that it's hard to tailor a game experience to personal desires when it's designed for the public.

However, there are some issues that can cause some players to turn away, such as losing connections, pelts or other valuable items.

Overall, it's a game that is working hard to move in the right direction, though the start may have been rougher than desired. With a healthy, realistic attitude, many players should be able to find ways to enjoy Red Dead Online, even with a few bugs to be worked out.