Pes 2020 brings a plethora of updates that put it even further in front of FIFA when it comes to gameplay. New ball physics and massive skill moves improvements are the two highlights but there's much more.

Another year, another Pro Evolution Soccer and FIFA. Both being iterative releases that don't really bring any profound, far-reaching improvements to gameplay like it is the case for all releases sans those that get come out the year when new consoles land, right? 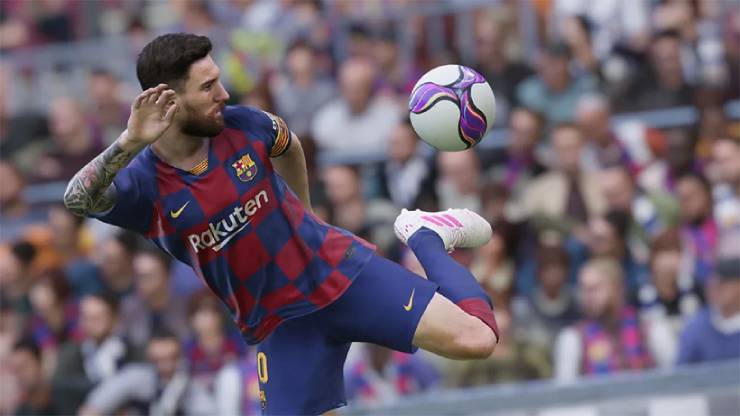 Well, I can't say what FIFA has in store but this year's PES is filled with updates and improvements that push the game even further from FIFA when it comes to the quality of gameplay and the authenticity of the virtual football game both titles try to recreate. PES 2019 was noticeably better than FIFA 19 and PES 2020 is miles better than last year's release.

The changes are aplenty with the focus being on the deeply reworked ball physics and the new skill move system that is finally intuitive to use. As soon as you kick the ball for the first time you notice that it has a proper weight to it, it doesn't feel like a weightless balloon-like in last year's game.

Its physics is more akin to FIFA games, where the ball feels bulky and where every pass and shoot has a noticeable heaviness to it. But unlike in FIFA, the ball has a real-life momentum and acceleration. In PES 20 you kick the ball and it feels like you kicked a real-life object with actual mass.

Further, that object accelerates and slows down naturally. Not like in FIFA where the ball is heavy, yes, but where the ball physics fails to replicate real-world acceleration (no matter how hard you kick it the ball feels like it accelerates too damn slow) and real-world momentum (it decelerates like the pitch is covered in glue and features extreme traction).

The behavior of the ball while in the air also is much closer to the real-life feeling. The arc is behaving according to the laws of physics and when a player kicks the ball with their head it doesn't look and sound like they have hit a damn bowling ball. This redesigned ball physics is amazing in action and it adds up much in terms of realism. 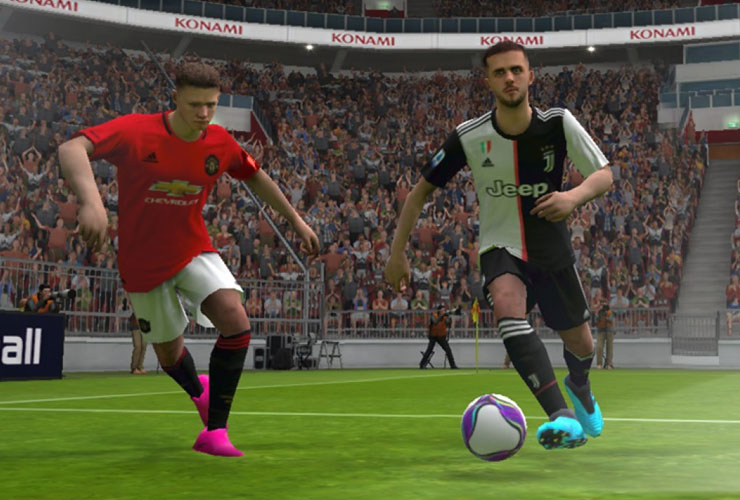 After you play a couple of games your passes become much more punctilious compared both to FIFA 19 and PES 19. It's because physics is accurate so players can make a better estimation of how fast the ball will travel and how fast (or slow) will it decelerate.

Shooting the ball also feels much better, with excellent weight to it but also with natural acceleration. If you kick it with full force it won't accelerate to light speed in one nanosecond (like in PES 19) but it also won't behave like a typhoon-strength wind is blowing to its face as it does in FIFA. For me, the reworked ball physics is the star of the show this year and the biggest and most welcome change.

The new physics also goes excellent with free kicks and especially corner kicks. Free kicks are easier to perform. Putting the ball right where you want it is simple thanks to the improved and, more importantly, consistent ball behavior. Corner kicks were one of the worst things in PES 19.

The ball would travel too wide, it would land in front of the goalie, or land in front of the near post even if you waited for the shot meter to travel almost to the middle. And if you filled the meter just a millimeter over the middle the ball would end up way over the far post. But now, post-shot controls aren't finicky as before making precise shots much easier to pull off.

Scoring a goal from the corner won't happen every fortnight like in last year's game. Crosses are also much better thanks to the new physics and better controls.

But those two improvements don't mean you will score every time since AI players are more aggressive and smarter when positioning. They follow your players like shadows and jump at just the right time to counter them. 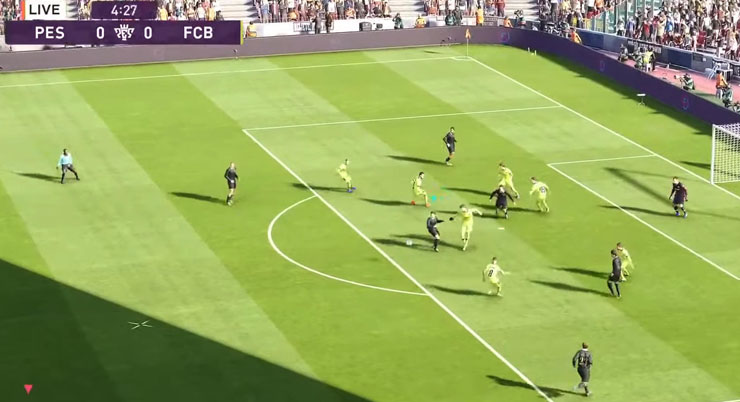 They also follow your players better during side attacks. They cannot be fooled like in the past with a couple of feints and won't suddenly decelerate when your player pulls off a cross. Head shots are now stronger and have actual force, which was a weak point in both PES and FIFA 19. The improvements to corner kicks and crosses are great but you won't score goals easier since AI defenders are now behaving more aggressive and are smarter.

But that's not all. For instance, PES finally implemented an intuitive skill moves system that maps all moves to the right stick and utilizes similar mechanics like FIFA, making it easier to complete skill moves and feints. So, you flick the right stick up and the player will pull a simple dribble in that direction, like in FIFA where the system originated and where it was one of the biggest advantages for years.

This new system, combined with manual control button (L2), creates an extremely fluid way of controlling players that can lead to some master-level dribbles and much tighter control in general. I love the upgraded system and find it much better than in any previous PES game but have to say that it is still below FIFA's system which still holds the crown.

Directing your shots is also better and simpler. You will find that more shots land where you want them to land and fewer shots will murder some unlucky person in the audience, which happened all the time in PES 19. Post hits galore is no more, which stripped the game of its authenticity and made it look like a game of pinball, especially after you ended up hitting both goalposts and the crossbar in one attack. 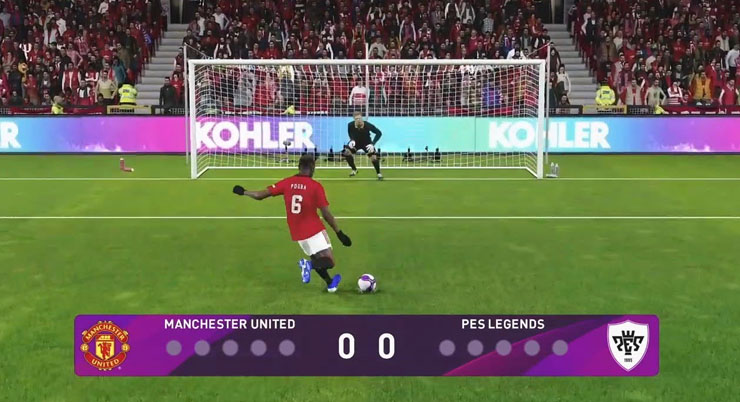 Further, goalies aren't superheroes like they were for years in Pro Evolution Soccer games. Yes, they can pull off some impressive saves but won't stand up and pull another superman save in less than a second like before. This, combined with better aiming and fewer goalpost hits means more goals and much more enjoyable games.

When playing PES 19 with mates we would usually score between 0-3 goals most games but now, after playing just a dozen or so matches, the number of goals almost doubled. Results such as 5:3, 6:5, or 4:3 are common now and I love it.

I mean, some might dislike this noticeable jump in goals per match but when I play football I want to score many goals and I want my opponents to score many goals (as long as I play with friends) so we can have fun time instead shooting penalties every other match because we both had radioactive octopuses on our goal lines.

Sadly, this plethora of gameplay improvements didn't cross over to the menus, which are unintuitive again, with another year of ugly UI that looks like it's from some Chinese knockoff video game.

And considering licenses well, you have Juventus, which is a PES exclusive this year along with Manchester United, Bayern Munich, Barselona and Arsenal. There are also plenty of south American teams such as Colo-Colo, River Plate, Flamengo, Vasco da Gama, etc.

But that doesn't mean Konami paid for full licenses this year and chances are we won't see licensed Premier League or Bundes Liga (I would really want to finally see Bundes Liga teams in PES 20 without modding the damn game) competitions like it was many times before. 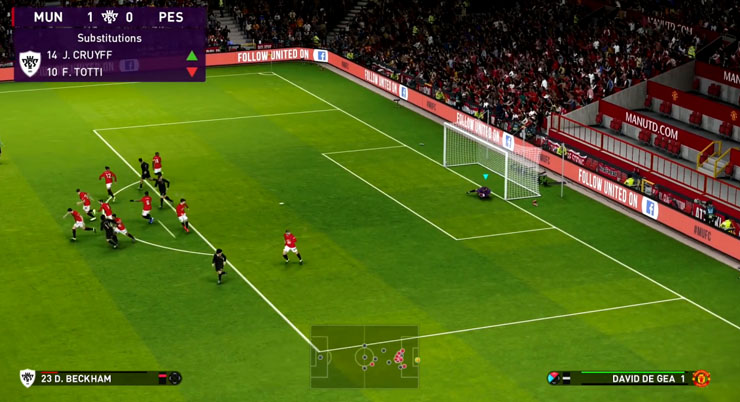 But let's wait for the full version. I mean, I wouldn't mind fake competitions as long as we have licensed team names (they even don't have to have licensed kits) and player names. I would be more than happy if that was the case.

Overall, PES 2020 feels like a completely new game of football when compared to the last year's release. There are plenty of gameplay improvements that push the game more closely to the real thing than any previous release.

When compared to FIFA 19, PES 2020 is lightyears ahead in terms of gameplay (and by the looks of it, FIFA 20 will keep its unnatural ball physics which means a definite no buy from me). But, it seems we will again end up empty-handed when it comes to the licenses.

I doubt Konami would talk non-stop about how they made Juventus PES exclusive if they really paid for all competitions and all teams that were missed in PES 19 because, if that was the case, the company would boast about licensed teams and competitions from the day they bought those licenses. While that can be remedied with fan patches both on PC and PS4 I would still really want to see an actual PES game with fully licensed teams and competitions, just for once.