Gears Pop! Is An Interesting Take On Clash Royale Marred By Its Aggressive Micro

Published in Gaming on 5th September, 2019

Visuals are awesome, combat is interesting enough to keep you hooked, and lighting fast matches are spot-on for mobile play but ultimately, Gears Pop! asks for money investment too steep to be enjoyed by casual players.

Gears 5 is just around the corner (it will be out for Game Pass Ultimate holders by the time this piece comes out) and Gears fans now have an option to play with their favorite characters anywhere thanks to the latest mobile take on Clash Royale called Gears Pop! 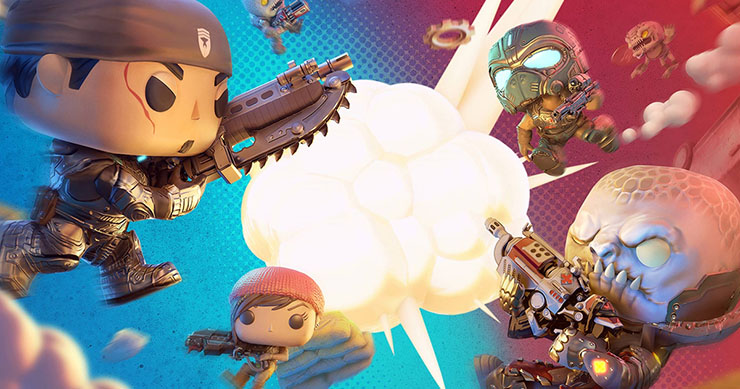 The game took the massively popular formula of Clash Royale's real-time battles, added a bit of Gears cover shooter flair, painted everything in cute Funko Pop colors and character models and voila, you've got one of the cutest mobile games around featuring excellent strategic combat.

You start the game with a couple of tutorial missions that explain the basics and are there to make you familiar with unique, cover-based battles in Gears Pop! and as a way for you to earn your first loot box (more on that later) allowing you to upgrade your army and get some cool new heroes.

Once you finish the tutorial there's a couple of game modes available to play, with advanced tutorial scenarios being the logical choice since they award much-needed resources. These advanced tutorial missions are also important because they teach you about tactics unique for Gears Pop! that could really help you once you enter the multiplayer battles.

Now, the combat is pretty similar to the one seen in Clash Royale. You have your pool of eight units, each costing a certain amount of energy that is refilled at a constant pace and your goal is to destroy enemy's turrets along with their main trench while trying to stay alive.

Each of the two turrets gives you one point and the last entrenchment is also worth one point, meaning that you can get a max of three points for a victory. Again, like in Clash Royale. But Gears Pop! takes the signature mechanic of Gears series and makes it an important part of its gameplay. Yes, we're talking about its cover-based shooting.

In Gears Pop! the battlefield is divided into four parts instead of just two like in Clash Royale. You have covers on each side of the field and your units can capture the field by taking over covers on both sides of the field. Once you're in control of covers on both lanes you can deploy new units one step closer to the enemy's defenses. 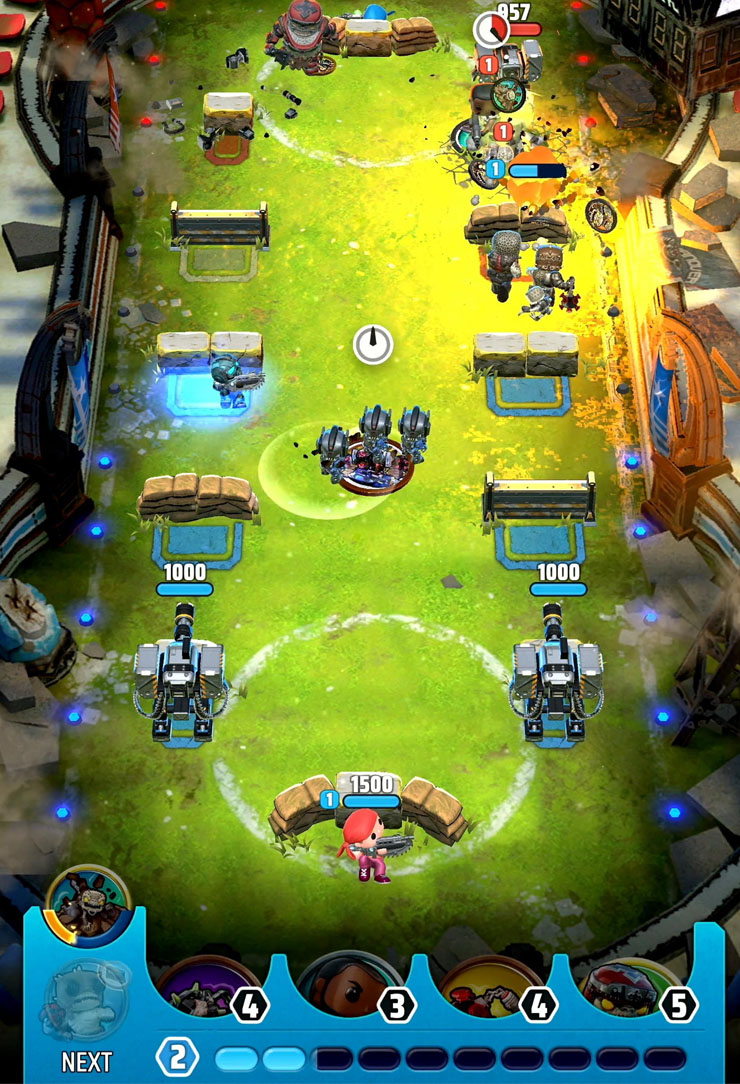 Take the whole field and you can swoop in units right next to your opponent's turrets, which can be devastating even you're in control only for a dozen seconds or so. This makes each battle much more dynamic than in Clash Royale and similar games since you have to take care of both defensive moves and taking over covers.

And of course, the units are quite varied and they are divided into a few basic tiers. You have special units that can take over covers and they are extremely important since no other unit type can do this. The cover-based units are the most important part of every squad.

Then you have smaller units deploying in groups of three, great for defending against certain enemy types or for invading enemy base when deployed behind tanks. There are also special units attacking only turrets and they are irreplaceable for late-game push, once you gain advantage on the field by aggressively capturing covers. And finally, you have single units that attack any other unit along with turrets but cannot capture covers.

There are also special cards that can be a part of any squad and those can be handy at times, especially for defending purposes but putting more than one in your 8-card (Gears Pop! uses pins instead of cards for units) squad can often be counterproductive.

And finally, there're special powers. Those are destructive effects that can be activated one or two times per match and are able to completely turn the tide of the combat. The starting one is a swarm of wretches that can lay havoc when deployed along with turret-destroying units. The swarm is also effective as a defensive tactic, making it great at both sides of the playing field.

Matches in Gears Pop! last of a couple of minutes, are fast and dynamic and are excellently designed for mobile gameplay. You can play one whenever you have a couple of minutes of free time and they tend to end before the timer expires. The usual scenario sees one player taking over three sets of covers followed by unleashing units good at destroying turrets, usually spelling game over for the other player.

When it comes to balance I have to say that Marcus Fenix units (he has two alternate units, one from the original trilogy and the Old Man Marcus from the new saga) are unmatched when it comes to taking over covers. They are strong, have excellent damage and can conquer the field extremely fast. You can send two of them and they'll reach the center of the field before you know it, opening way for other units to be deployed at the enemy's front door for a long chunk of time. 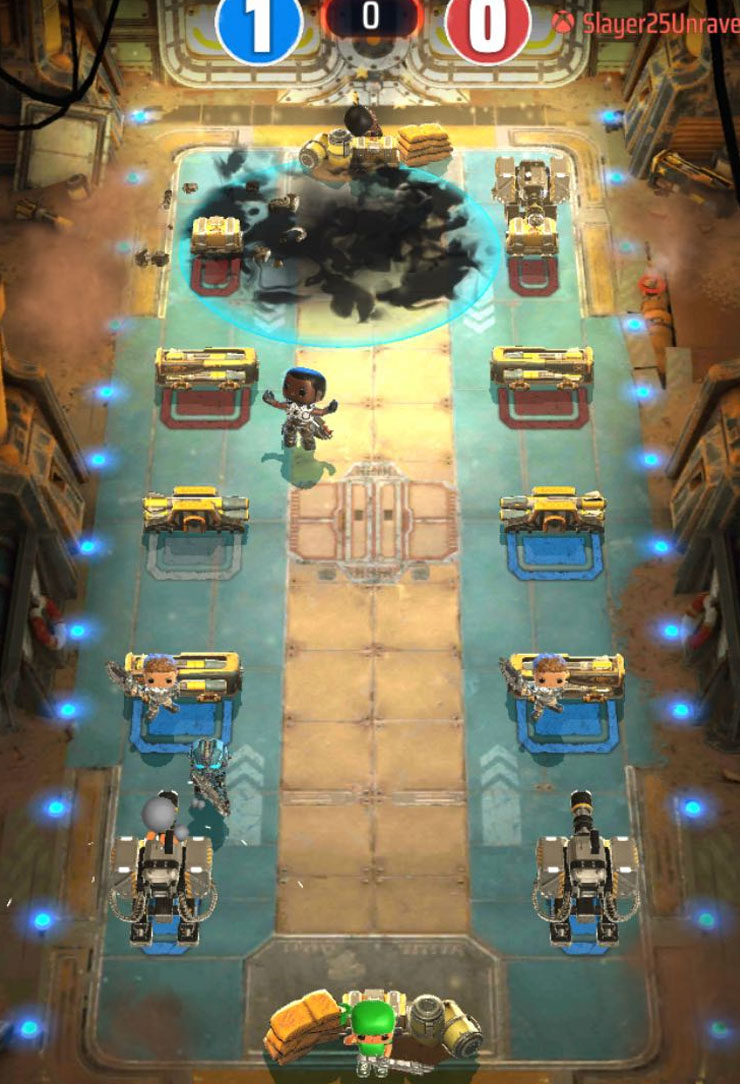 Each win gives you a randomized loot crate and the good thing is that here, every crate has a timer of its own. In other words, all four chests in your queue have their unlock timers running at the same time.

You don't have to wait for one-timer to reach zero before another crate enters the queue. This is great because you can win four crates, wait for all of them to unlock (which is much faster than in Clash Royale), open them, play another four games, rinse and repeat. Overall, you can get resources and unit cards much faster this way.

The problem with Gears Pop! becomes apparent after a week or so of playing the game. After you advance a couple of multiplayer leagues matches become virtually unwinnable because other players have squads that will crush you in less than a minute.

The game's great but its aggressive microtransaction model mean that casual players who don't want to spend any money won't be able to beat anyone after a week or so of playing the game.

The grind also becomes pretty annoying after a while; every single upgrade becomes extremely expensive for those who aren't planning on spending real money.

Another issue is that an interesting game mode taken from the console version of the game, the Horde, can only be played by your clan buddies and since clans support up to 50 players chances are no one will want to play Horde at the same time as you, if you're lucky enough in the first place and find more than two or three clan members online when you start the game.

I hope Microsoft changes matchmaking rules when it comes to Horde mode and allow us to play with strangers instead of allowing us to play with only 49 other people who are part of our clan, most of them being offline ninety five percent of the time. 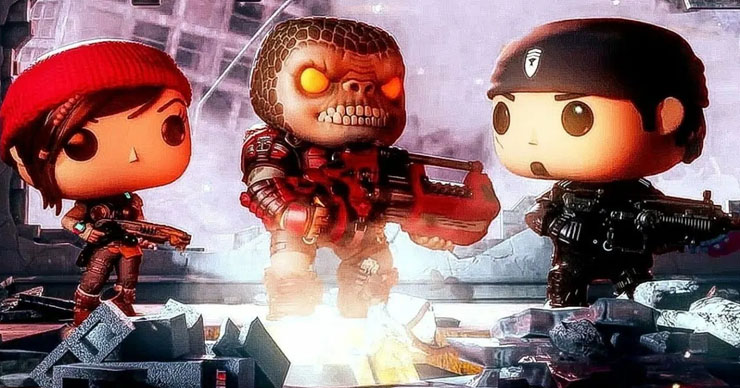 When it comes to the visuals the game looks cute as hell. Each character is modeled as a Funco Pop figure and each figure is modeled in high detail. Fields that host matches are also very pretty and with lots of details. The only thing I didn't like is the lack of effects when units clash since it's hard to notice events happening on the screen when the sound is off.

A bit more eye candy during shootouts, explosions, and moments when a cover is taken would make the game easier to follow when your speaker is set to silent.

Overall, Gears Pop! is an extremely interesting reimagining of one of the most popular mobile games around. The cover system is amazing, with dynamic battles where the deployment line is moving back and forth each second and with amazing moves that can win a game in less than a minute.

Units are varied and there are lots of proficient units in the game but the thing is that, at the moment, Marcus and his old self are just OP. I hope this will be fixed in the future. And finally, if you plan on playing the game longer than a week or so be ready to shell out some cash.

The special promotion for new players costs about $7 and contains enough resources along with a potent loot box to make you competitive for at least one more week. $7 isn't so bad a price for two weeks of playtime. But, in case you're a casual player who just wants to play the game without spending real money, it's better to skip Gears Pop! since the game isn't suited for the casual crow.