Published in Gaming on 2nd October, 2019

Mario Kart Tour is fun to play mobile version of Mario Kart with lots of characters to pick from. You will have fun playing it as long as you don't expect it to be a full-fledged Mario Kart title.

Mario Kart Tour came out a couple of days ago and lots of coverage it got was pretty negative, to say the least. The game was rightfully bashed for its greedy microtransactions. 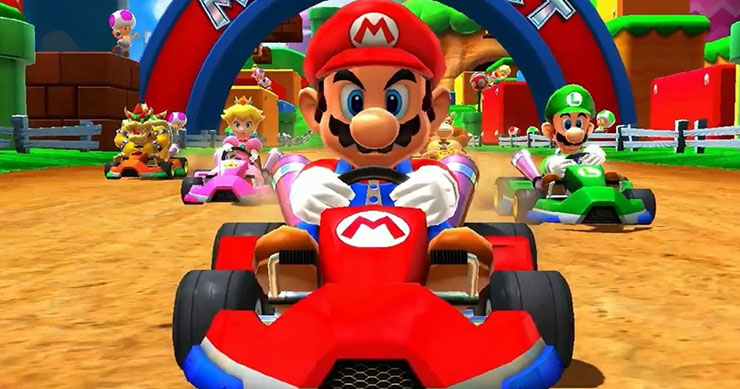 It's Gold Pass, a $5 a month subscription that allows you to play 200cc game mode and that comes with additional rewards is indeed astonishingly bad way to charge for the game.

The Gold Pass looks even worse when we compare it to the amazing Apple Arcade that cost the same amount but gives players dozens of amazing games without in-app purchases. But the level of disappointment with other parts of Mario Kart Tour is unjustified.

This is a free mobile game that plays like a simplified Mario Kart title and does that pretty well. It features plenty of tracks from the main series, lots of characters to choose from and it's a pretty enjoyable way to spend time while waiting for a bus or while commuting to work.

The core of the game is simple; you have a huge number of cups, each featuring three regular races and one special challenge and each race gives you stars. Stars are collected in order to unlock new cups and prizes. You win races, collect more stars and advance through the many cups while also getting prizes such as new characters, karts, and gliders.

Each race gives a certain amount of points for a podium finish and during each race your actions such as drifting, jumping, using powerups and more give you additional points that all count toward the final score. 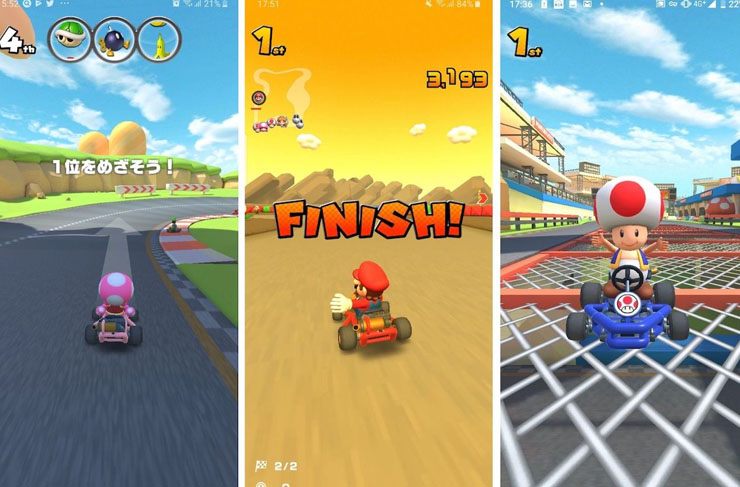 Finishing first can be a bit tricky thanks to the signature insanity that are Mario Kart powerups but racing is fun and each race has only two laps (in order to make the game suitable for short gaming sessions) so grinding to get the first place isn't tedious. You can finish first after a couple of tries but even if you don't there's a good chance you'll collect max stars in case you finish second or third.

Different Mario Kart Tour characters and different karts don't give you any gameplay advantages such as higher speed, faster acceleration, or immunity to powerups.

The last thing can be considered a gameplay advantage but since races are strictly single player (you race against bots that follow best times of real people) it means that other players cannot get multiple powerups depending on their characters.

The more you use a specific character, kart, or glider, the more points you get at the end of a race. This means that picking a new kart that gives the biggest points bonus can still garner you fewer points than going with a kart you drove on dozens of races. Overall, the system doesn't feel unfair. You can win races by picking any character and any kart, it doesn't matter much. 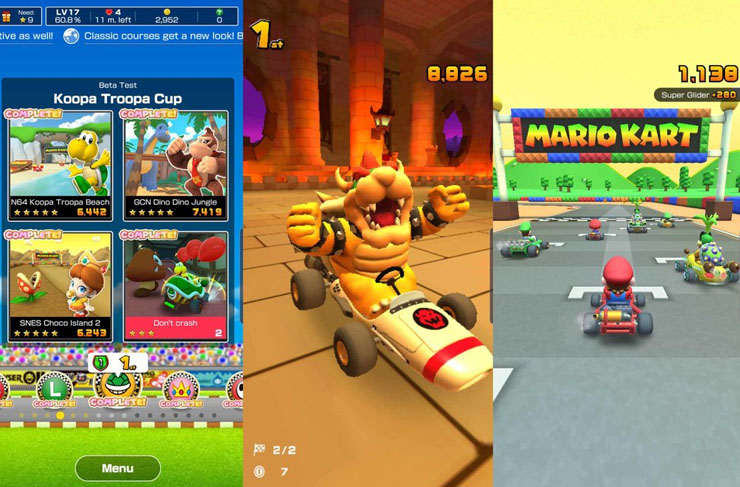 Controls are simple and they include swiping left or right in order to make turns, tapping the middle of the screen to activate powerups, and performing sharp swipes to drift. While the control scheme could've been better this swipe system is easy to learn and easy to use. The game also features tilt controls but I found those much worse than the regular scheme.

Mario Kart Tour doesn't support wireless controllers, which is disappointing but since the game is made as a time killer during short breaks this omission doesn't hurt the gameplay much. Also, drifting is hard to pull off at the start but after a couple of races, you will get good enough to be able to perform regular turns when needed and to drift when you get the chance.

Visuals are very pretty and while Mario Kart Tour isn't technically impressive the game features colorful visuals with pretty character models and beautiful looking tracks. There's a ton of different tracks, each taken from other Mario Kart games and each being a simplified version of those tracks.

Tracks look pretty and while they lack in detail, they are attractive enough for a mobile game. Mario Kart Tour went for a classic game app design meaning simple one-hand controls and exclusive portrait mode. This could've been different (the game would definitely play and look better in landscape) and I hope Nintendo will add the option to play the game in landscape mode in some future update.

At the moment Mario Kart Tour lacks multiplayer and this really hurts the game. Yes, single-player content is fun and interesting to play (as long as you limit playing sessions to about half an hour or less) but multiplayer is what would make Mario Kart Tour a real banger.

Luckily, Nintendo said that multiplayer is coming in the future and I reckon that playing against other people will make the game much, much better since multiplayer is what makes Mario Kart games so fun and enjoyable in the first place. 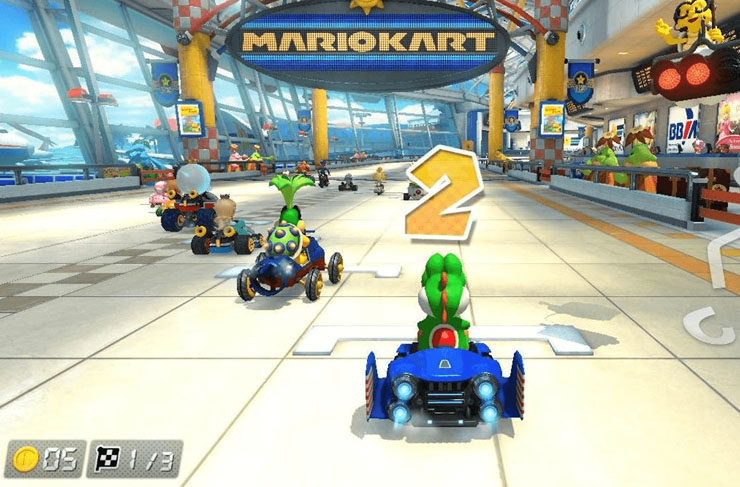 And since different characters and karts don't come with gameplay advantages multiplayer shouldn't favor players who spent real money on the game.

And when it comes to spending real money well, Mario Kart Tour features lots of in-app purchases. You have your premium currency called rubies and they can be bought for real money. Rubies give you access to the game's version of loot boxes which award new characters, karts, and gliders.

But as I said, those don't give any gameplay advantage other than slightly boosting your points meaning that you don't need to spend money on loot boxes. What isn't so good is the game's Gold Pass that costs $5 per month and comes with additional rewards for winning cups and with 200cc game mode, which is locked by default. This is quite bad but not having access to the 200cc mode may be a blessing in disguise.

I took the free two-week promo period Gold Pass just to check out the 200cc mode and can say that the fastest mode isn't fun to play, at all. It's simply too fast to be enjoyable with swipe controls (the 150cc speed is the best for the default control scheme) and it gives the same amount of points for podium finished as when playing on 150cc difficulty. 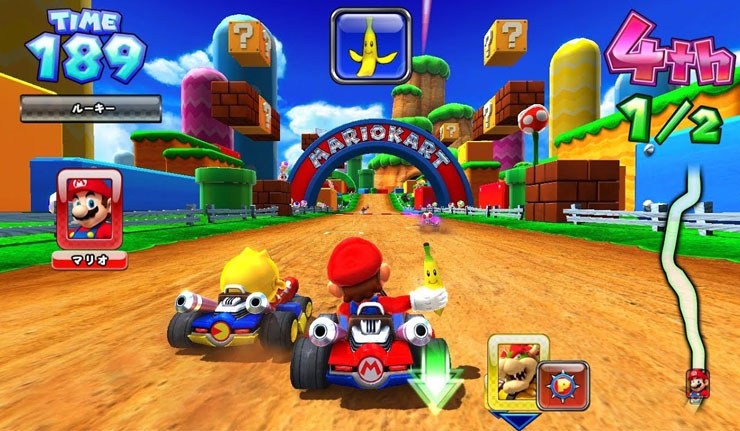 In other words, there're zero reasons to play Mario Kart Tour in 200cc mode and thus zero reason to get the obnoxiously priced Gold Pass.

Mario Kart Tour is a fun little mobile game and you should lower your expectations before downloading it. This is a mobile game with simple controls, easy to learn gameplay, and if you don't expect miracles from it you will most probably enjoy playing Mario Kart Tour.

If you expected a full-fledged Mario Kart game for mobile devices don't play this one since it will definitely disappoint you. If you want to play an awesome Mario Kart game well, Mario Kart 8 Deluxe for the Switch is an amazing game and you should play that one instead.