Call of Duty Modern Warfare returns to its roots with realistic combat, killstreaks, and extremely enjoyable gunplay. The multiplayer's great but the new Ground War mode has some quirks in need of a fix.

After countless games Activision decided to reboot their most famous Call of Duty subseries, Modern Warfare. This includes a soft reboot of the single-player story as well as return to the classic Modern Warfare multiplayer that lived through its glory days back when Modern Warfare and Modern Warfare 2 were the talk of the town. 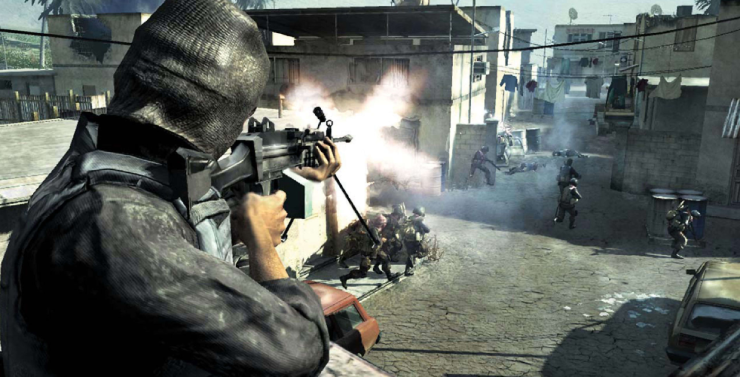 While I cannot say anything about the single-player campaign, I did dive into multiplayer during the recent multiplayer beta weekend and can say that, if Infinity Ward keeps the formula seen in the beta without adding pay-to-win loot boxes (We're looking at you Black Ops 4), limits microtransactions to cosmetic items, and introduces some changes to the new Ground War game mode, CoD Modern Warfare will be the best Call of Duty multiplayer experience since well, Modern Warfare 2. Before diving into gameplay and game modes let me just say a thing or two about visuals.

They are great, with detailed models, realistic lighting, sharp textures, and pretty solid shadows and ambient occlusion effects. Best of all, the game works at constant 60 frames per second with zero hiccups on an i7-7700, GTX 1060 6GB, and 16GB of RAM. The only time you will notice any slowdown is during spawning, which can get you killed since you basically can do nothing for a couple of seconds.

Now let's talk about the gameplay. The things are kept simple, without going for unique operators with different skills, a plethora of gadgets or special weapons. Also, Killstreaks are back. You have your classic killstreaks such as the UAV, Cruise Missile, Chopper Assault, Aerial Assault, etc. They're the same they were in old Modern Warfare games. Health is automatically regenerated again, allowing players to perform risky maneuvers with the game attaining fluid gameplay where you can quickly get into action after being healed.

The gunplay feels amazing and each weapon feels just right. Weapon recoil is noticeable but nothing that cannot be controlled with tiny mouse compensations. But in the heat of the battle your knowledge of a certain weapon can mean the difference between life and death since you have to compensate for the recoil based on muscle memory and that takes lots of time spent with a certain weapon. 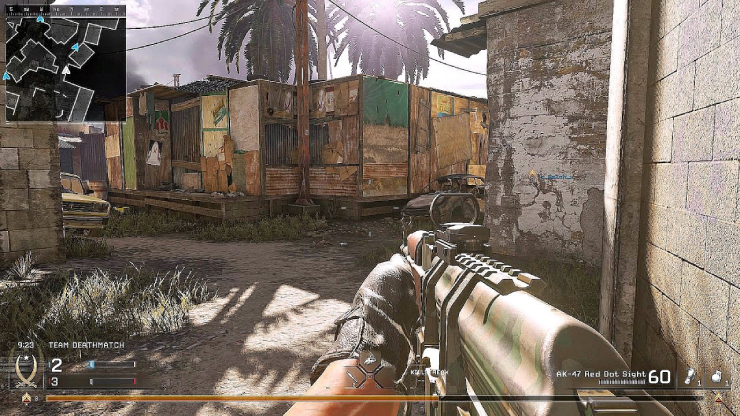 Kills are usually fast and require a couple bullets to the head or more than a couple of bullets landing into other body parts. The game doesn't feel like it gives advantage to players who shoot first, like in certain older CoD games.

In Modern Warfare you can kill an enemy even if they noticed you first, all it takes is super precise aiming and a bit of luck. Just aim for the head and in case you land your first couple of shots it's game over for the other side. Hip fire is quite imprecise and you can expect for it to be counterproductive for all distances greater than a couple of feet (one to two meters).

When it comes to the weapon power assault rifles are pretty versatile but SMGs are also pretty efficient, even at mid-distances. Shotguns are life stoppers in close quarter gunfights but are lousy at anything greater than fifteen feet. When it comes to sniper rifles, they can be usable in Ground War, once you're safe inside a building or quietly tucked away on a roof but aren't really handy for other game modes. Overall, gunplay is amazing and is reminiscent of old Modern Warfare games. 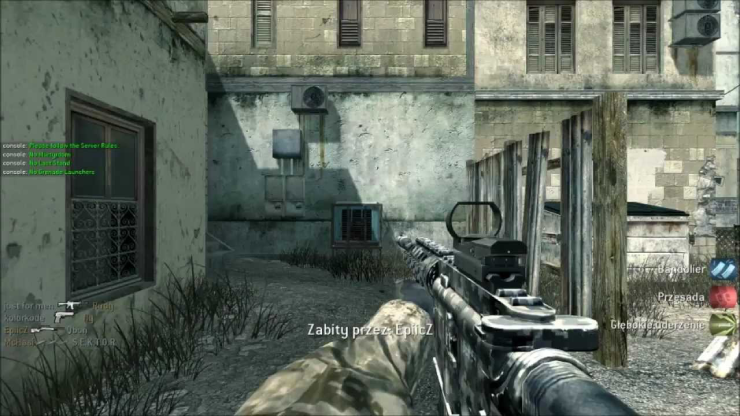 Gunsmith, the new gun customization mechanic, works great and allows for extremely detailed customization of your favorite weapons. You can customize multiple parts of each weapon, with assault rifles offering the greatest level of customization. The M4A1 has about 20 different parts divided into 5 categories while most other weapon types have fewer customization options (usually 5-12).

Different components bring certain benefits but almost every single one comes with one or a couple of small penalties. You have to think twice before equipping certain components and make sore to not stack certain drawbacks. For instance, increased aim down sights time can be found on almost every piece of equipment as the main penalty.

This means that in case you go for, let's say, three components that come with increased aim down sights time you will get better control, less weapon sway, more damage or bigger range.

On the flip side, you'll take a huge hit every time you press the right mouse button and opponents will probably land a couple of shots into your body before you even pull up your weapon, which completely detriments the advantages you have. In other words, you have to be careful when picking customization components and always have in mind that great bonuses come with noticeable disadvantages; modesty is the key here so think which bonuses you need the most and are ready to sacrifice certain stats to get.

When it comes to game modes you have your classic Team Deathmatch, Domination, HQ, and big versions of Domination and HQ that can host up to 20 players. Regular maps are still tiny and filled with corridors and corners, perfect for tight 6v6 Team Deathmatch and regular Domination matches. One map from the open beta is divided into two lanes and is great for Team Deathmatch but not so great for Domination.

The second map is a classic two-lane with a wide middle lane that's basically a kill zone and it works great for both Deathmatch and Domination games. Their main problem is small size but anyone used to CoD multiplayer won't have any trouble playing them and will have great fun. We also had great fun playing small scale game modes. 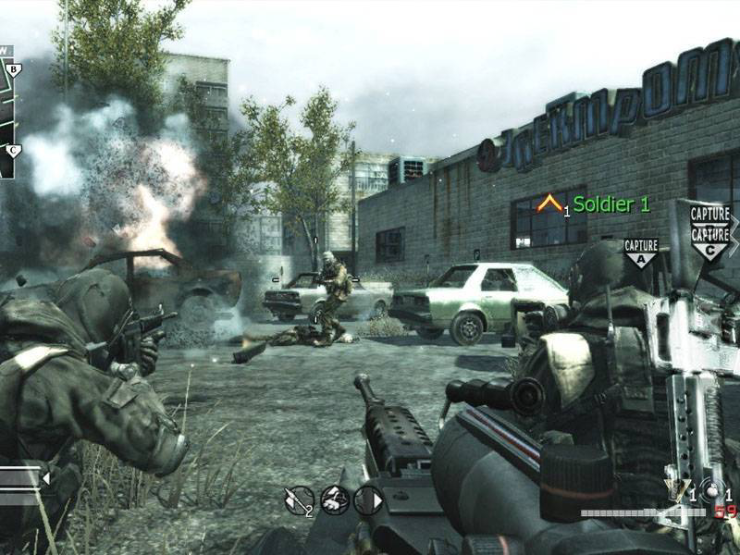 They work flawlessly, are based on fast movement, constant position swap, and occasional camping sessions. Adrenaline flows non-stop and the whole combination of fast movement, deadly weapons, and sudden killstreak attacks is amazing and I can wholeheartedly recommend CoD Modern Warfare for those who want to play classic game modes.

The new realism mode (old players will remember hardcore modes found in previous CoD games) is a disappointment. I thought the mode is all about HC combat where one or two bullets mean goodbye (and couldn't wait to unlock the ultimate Hardcore mode weapon, semi auto FAL rifle) but the reality is a bit different and thus, disappointing.

First of all, realism stands for zero HUD elements. You don't even get the notification when you kill an enemy which can lead to some funny moments. I once meleed some poor chap and since I didn't know he died from the first impact (there was no notification) I continued to beat him until his buddy shot me from the back. Aside from removing the HUD, developers didn't change anything compared to other game modes.

The main focus on this year's Modern Warfare game are the new game modes that cover complete opposite sides of the spectrum. On the one side, you have Gunfight, a 2vs2 mode that is insanely fast and ridiculously fun in small doses. Each match is played on tiny maps specifically created for the Gunfight mode and each one follows specific rules when it comes to the equipment. 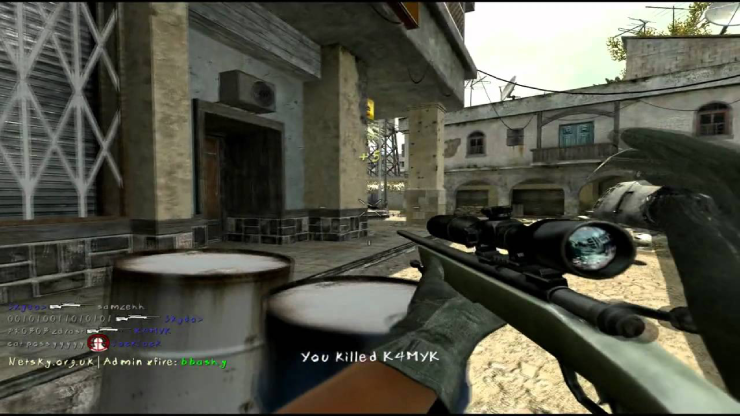 If you have a friend you want to play CoD Modern Warfare with do check out Gunfight, it can be crazy intense and ridiculously fun. But the mode losses its appeal after if you play it longer than one hour straight (at least for me). But its Esports appeal is undoubtable and it will be fun to watch Gunfight matches at CoD Modern Warfare tournaments.

The next big thing in Modern Warfare is Ground War, a 64-player mode that tries to tackle Battlefield and its famous Conquest mode. And it can be lots of fun but Ground War does have its fair share of shortcomings, at least in the beta state of the game. First of all, vehicles are so OP it's ridiculous.

I once entered the APC just for fun and ended up killing like 20 enemies in a row (it's great that vehicle kills don't count towards your Killstreak score), denying the enemy team point D for good four to five minutes. All that while being stuck between a train cart and a building!

The single map available during the beta (Karst River Quarry) features control points placed across the middle of it, making the east and west lanes ghost towns populated by an occasional sniper or an infantry assault vehicle that bombards the middle of the map. It would be cool to see other maps have control points covering their whole surface area like it is the case in Battlefield. 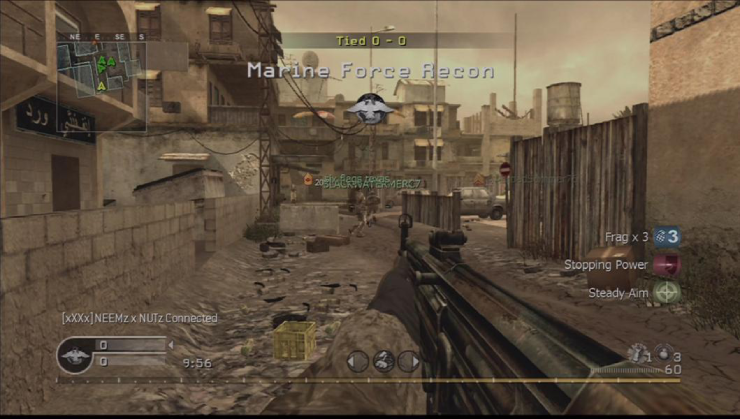 Also, the quarry map is all about finding your way inside a building and then getting onto higher ground. Most clashes happen inside since roaming outside usually means a quick death by one of the numerous snipers. I hope that other Ground War maps feature more open areas with less multiple story buildings. And finally, getting spawn killed can be really infuriating, especially in Ground War and Team Deathmatch but chances are Infinity Ward will fix this by the time Modern Warfare gets released.

Overall, Ground War is a fun way to spend your time inside CoD Modern Warfare. Yes, vehicles are overpowered (and they have lousy controls) but that's mostly because of the fact most players aren't used to carrying a missile launcher as their secondary weapon like you have in Battlefield.

Also, it would be great to increase the damage of the C4 and allow everyone to carry it in order to deal with the vehicles. The map feels narrow and higher ground supremacy forces players to avoid open areas like they're covered in lava. But it's fun to play CoD on a large map, being able to utilize your assault rifles and snipers over long-range, to cooperate with teammates in order to strategically take control points and to run around the map and just be prolific for your team.

Call of Duty Modern Warfare has amazing multiplayer that ticks all the right boxes.

Sure, some things such as freezes after you spawn or spotty Ground War map design are putting a dent on the overall experience but this open beta was the most fun I've had playing Call of Duty ever since Modern Warfare 2 was a thing. I just hope Activision won't ruin the game with pay-to-win microtransaction. If they avoid that and focus only on selling cosmetics, Call of Duty Modern Warfare will be hands down the best multiplayer shooter you can play in 2019.