Published in Gaming on 1st November, 2019

So, you want to get the new FIFA20? Here's what you can expect to find once you start playing the latest football sim from EA.

FIFA 20 and PES 2020 are almost tied this year when it comes to gameplay and visuals. FIFA brought the solid Volta mode while PES overhauled its gameplay to match (and possibly outdo) FIFA, something we haven't seen since the excellent PES 12. 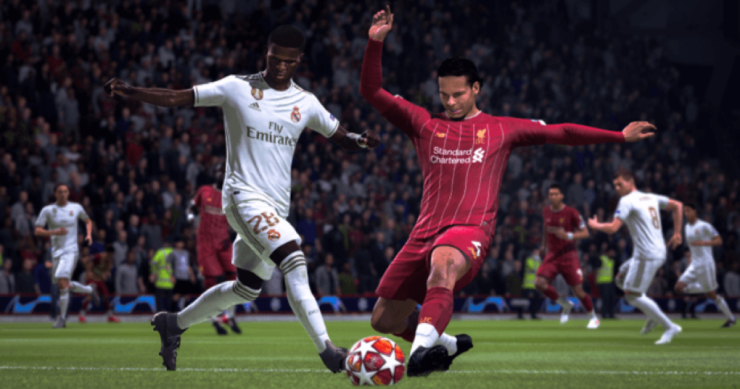 No matter which game you pick you are in for a treat. But in case you went with FIFA 20 here's what you can expect from the game once you start playing it.

New Volta mode in FIFA 20, which is fun to play with friends

FIFA 20 introduces a new game mode called Volta. Volta is basically the return of FIFA Street, a futsal-like mode with arcade moves, bigger-than-life dribbles, and off-the-wall passes that are quite enjoyable to pull off.

You have lots of different pitches located around the world and they all are colorful looking, with a bit of crowd at the sides, and most of them are walled allowing for some amazing pool-like passes.

The mode isn't meant to be played on a competitive level. The pace is extremely fast and one wrong dribble or pass can easily lead to the opposing team scoring a goal. But when you have friends over, friends with you play FIFA on a regular basis Volta can be a real joy to play.

The truth is FIFA 20 Volta mode is made for chilling out with buddies and for parties. Fast paced arcade gameplay, lots of goals and even more unrealistic moves are perfectly suited for times when you just want to have some fun and laughs.

Sure, Volta isn't the best thing to find in FIFA 20, far from it. But the mode is a welcome addition and is fun to play every time you have friends coming over.

A solid but not outstanding story mode

The story mode in FIFA 20 revolves around the game's Volta mode and while it can get cringey it's pretty fun. You create a player and then the story starts. The story isn't anything remarkable; a classic tale of rising above your weaknesses and dominating the world.

You get injured and everyone thinks that your career is over. But after you spend some time recovering from the gruesome injury it's time to get back to the world of street football. 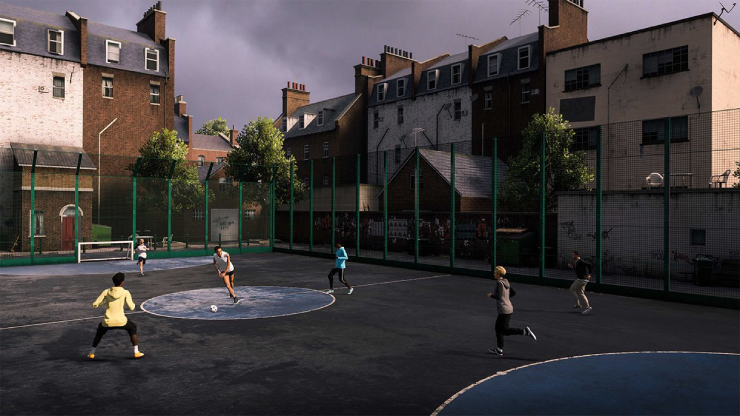 You form a team, which can be made of both male and female players, and start climbing the global ladder. There are lots of tournaments to win, lots of tough matches that demand scoring goals with impeccable efficiency, and lots of locations from around the world to visit. Your player earns experience points and skill points which can be spent in many different areas.

You can get faster, become a better dribbler, improve your shoot strength and accuracy or invest in better defense, just like in classic FIFA. There are also lots of cosmetic items to unlock and obtain and some of them carry cool bonuses. Overall, the story mode in FIFA 20 won't blow your mind but if you like playing Volta you will love it.

FIFA was always ahead of PES when it comes to licenses and FIFA 20 isn't different. You can play with a huge selection of teams from 30 national leagues. The most important national leagues such as Premiership, Calcio, BundesLiga, LIGUE 1, EREDIVISIE, La Liga are all here in FIFA 20. The most popular national leagues (England, Spain, France, Italy, Germany) also include lower-tier competitions, which is great for local fans.

Other popular leagues such as MLS, Mexican, Russian, Argentinian, and Chinese league are also present with authentic kits and players. And yes, FIFA 20 includes UEFA Champions League and Europa League. When it comes to national teams there are 49 men's teams and 16 women's teams. This all leads to more than 700 teams to choose from, which is insane. 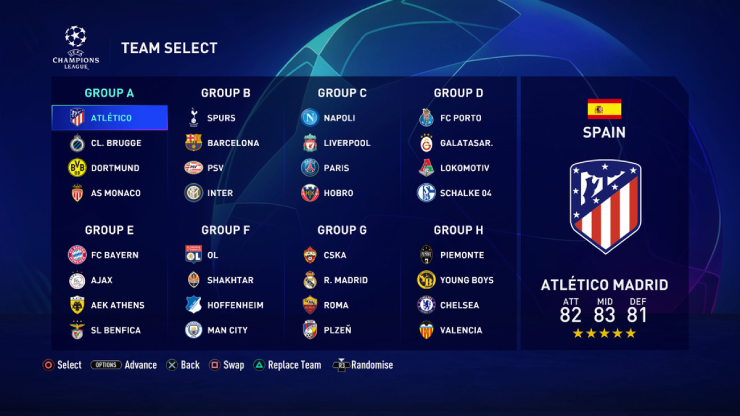 On the other hand, we have the omission of Juventus, which is exclusive to PES. Further, the Brazilian league features authentic team names but generic players.

Some national teams (Brazil, Cameroon, Czech Republic, India, Uruguay, and a couple more) have generic kits and player names, which is disappointing but you can't have them all, even if you're FIFA 20. If you want to play with Juventus, Brazil national team, or authentic players from the Brazilian league, you have to get PES 20.

Career mode is back and it's as good as ever. You shouldn't mix up career mode with the story mode, that's the one reserved for the new FIFA 20 Volta mode. In the classic career, you don't have any story and you play a classic game of football.

You create your player, set up some basic stats, pick the primary and secondary positions and start in some small name football team. From then on you play fixture matches as well as participate in friendlies and practices.

Earning skill points doesn't feel like and grind, the pace you level up at is just right and your player can become really good in just a couple of seasons. Playing as a striker is the most enjoyable but midfielders will also find lots of fun playing the FIFA 20 career.

Those who don't like running up and down the pitch can play as managers. The start is similar; you create a manager and pick the team you want to lead. From then on, the whole team is in your hands. You can change players, select starting 11, face the media, take care of your players morale and much more.

The new manager mode is interesting, especially if you pick your first team to be some small name, ideally from a lower-tier league. That way you can fight your way to the premier tier of the specific national league, or pick a better team once you make results in your first team. The career manager mode in FIFA 20 is great and it's almost better than playing career as a player.

For the past couple of years, the pace has been broken in FIFA. This was especially noticeable in FIFA 19 when you could catch up Messi with an averagely fast defender, which was hilarious at times.

The opponent would make a perfect pass behind your defense, someone like Messi, Hazard, or Mbappe would accelerate like lighting towards your goal and then your defender would simply catch them in like 3 seconds. The pace was broken and the game turned defenders into super-fast beings with the power of catching up anyone. 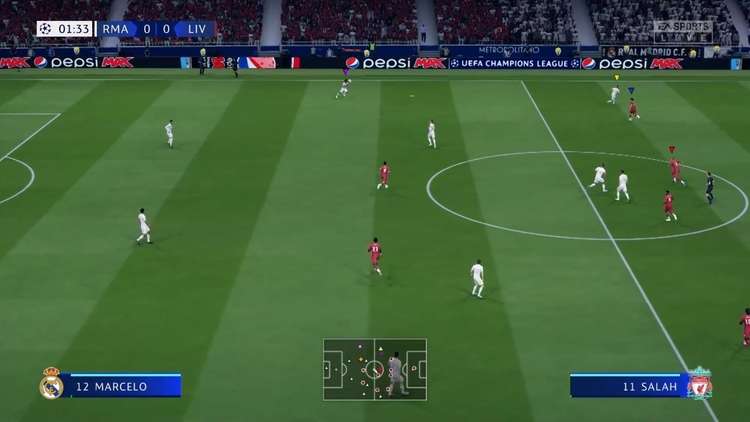 In FIFA 20, defenders aren't faster than Usain Bolt and pace is realistic once again. When you make a pass behind the defense and when a relatively fast player receives the said pass, they will most likely get into a goal chance. Defenders can catch attackers but for that to happen you have to control pretty fast defender and the deciding pass has to be sloppy so that attacker doesn't receive it perfectly, making them stumble a bit.

This is great because once again you can play a faster game of football where building attacks is quick and enjoyable. Three to five passes in the midfield, one moment where the attacker starts running behind the defense, and a timely pass are everything you need in order to create a goal chance. This makes matches in FIFA 20 faster, with more goal chances and ultimately, more goals and we love it.

Shooting is also reworked in FIFA 20 and this year it's all about precision. There are no more insane goals scored by one-touch shoots by holding the finesse shot button from way outside the box.

There are no more stupidly easy goals where you don't even need to aim in order to score a goal. This year, goals are to be scored from inside the box with a bit of finesse, rightly timed shoots and perfect shoot strength.

Strafe dribbling, known as crab walking among FIFA fans, was really helpful back in older FIFA titles. It was nowhere to be found for years but it's back in FIFA 20. You can now feint defenders and cross them with ease, with the perfect timing of the strafe dribble.

The move is very effective and great for many occasions. You can lure defenders to come at you and then decide whether your player will use a skill move or simply a quick burst of pace (in case they are very fast) to move past the poor defender who fell for the ruse. Crab walking is great to have back and it is super useful. Just don't overuse it with defenders because it can often lead to a loose ball and a goal for the opposing side.

While PES features a much simpler defending system that's much easier to learn and more fun to use when playing against friends, we have to say that FIFA has a better defense system. It's complex, it requires undivided attention, and it can lead to clinical tackles once you master it. And in FIFA 20 defending becomes even better.

Player switching, something that could completely mess up your defensive play in previous titles, is tightened up in FIFA 20 and works better than ever. You can switch defenders with ease; they won't become super dumb for a few moments after the switch allowing attackers to simply storm right next to them without even trying. 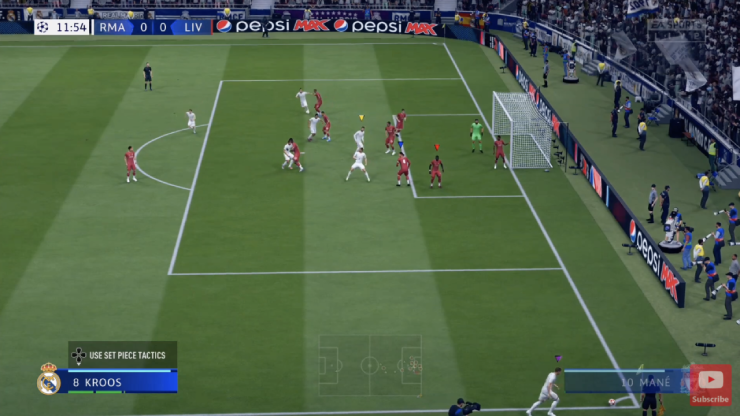 This year you have to control the defender closest to the ball because computer AI simply cannot contain attackers as efficient as it did in years before, which is great because FIFA 20 asks players to always be in the center of the action, always in control of players who are closest to the ball. And tackles are better than ever.

If you time it right, tackling the opposing player will often lead to the ball going into random direction allowing both your and opposing players to take it, instead the ball returning to the attacker or the game always taking the ball back to the opposing team, which was super frustrating in FIFA 19 and FIFA 18.

FIFA 20 introduces super detailed player faces as well as better looking stadiums. The grass is also a bit more detailed and the overall visual impression is better than in FIFA 19. On the other hand, animations are still a bit stiff compared to PES 20 and player movement isn't as fluid as in PES 20.

Ball physics is still lightyears behind PES (especially PES 20, which improved the already amazing ball physics seen in PES 19). The ball feels heavy, with slow acceleration and without that fast momentum it has in real life and in PES 20. But it's still good enough to not ruin the enjoyment.

FUT mode is quite enjoyable but grindier than ever

FUT (FIFA Ultimate Team) is bread and butter of every FIFA game and that stands true in FIFA 20. The mode is as enjoyable as ever. Creating your perfect team is fun and requires lots of strategy and knowledge. But on the other hand, the mode is grindier than ever.

The game received a kind of a Battle Pass this year and while it's fun playing FUT games in order to unlock various prizes waiting for you at each level of the Battle Pass, the grind is heavy and can be obnoxious at times. Prizes are okay but they include a low number of player packs, which makes FIFA 20 FUT mode basically a pay-to-win in case you want to play it on a competitive level.