How To Make Money In GTA 5

Published in Gaming and Money on 25th November, 2019

The economy in GTA 5 can be a rough one, but that doesn't mean you can't end up a millionaire with a whole lot of power. There are a huge variety of tips, tricks and activities you can engage in to rack up the dough no matter which character you're playing.

In time, you'll find that it's really not too difficult to earn (or steal) all the money you'll ever need. Just keep these methods in mind and use them when it's convenient. You're sure to be rich in no time at all! 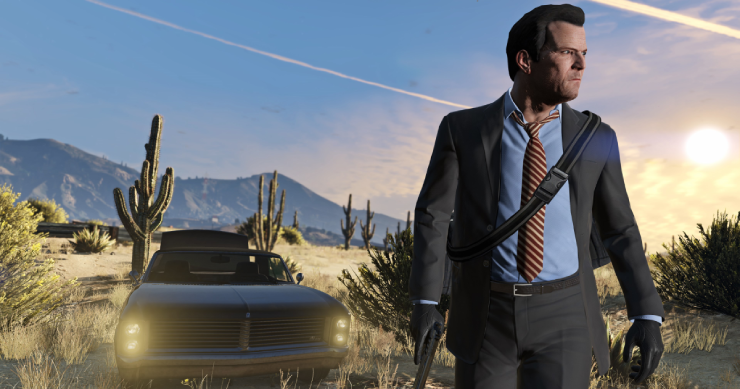 If only it was as easy to do in real life as it is in video games. In the realm of GTA 5, dying is something that just can't be avoided sometimes. However, it's best not to lean into it. Money has to be spent every time you die, due to the processes of cloning and memory-recreation.

When you're looking to keep as much money as possible, it's better to avoid that scenario altogether. Make sure you prepare more than you expect you'll need to if you're planning to go into a mission or task in which you might be killed. The more prepared you are, the less likely it is that you'll die a needless death.

It might mean that you have to play more carefully, but your bank account will reap the rewards in the end. Additionally, make sure that you manually save before you decide to go on a rampage through the city. That way, you can blow off steam, die as many times as you want and then come back to the regular game without that added cost.

One of the first steps to keeping more money is to spend less. Naturally, when fewer funds are leaving your bank account, more will be in it. This can be particularly tricky if you're someone who wants to have all the guns, several outfits and multiple hairstyles to choose from.

Instead, try to keep things as simple as possible. Take a look at online guides to find your favorite outfit and hairstyle, and buy only those. It may mean you have a little less flair, but I can guarantee that the NPCs aren't going to mind if you're going to every mission in the same outfit.

When it comes to the available guns, you may want a few different kinds to get through your missions. However, there's just no need to have multiple varieties of the same type of gun. Just choose one of each type and you'll be good to go. No needless spending, and you'll still have plenty of firepower.

In this world you'll find numerous people just waiting to be robbed, and the good news is you won't actually be harming anyone when you do it. While this method may not pay out quite as much as some of the more intense options, it is one that can get you some quick spending money. 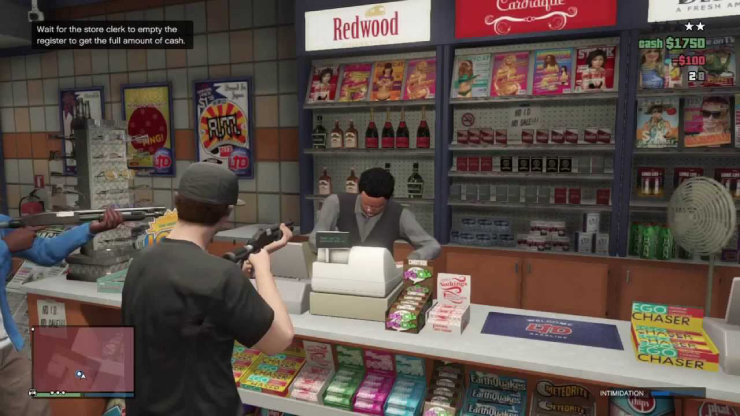 All you have to do is hang out near one of the ATMs in the area. Choose one that will be easy to get to and away from. Remember, once you rob someone, the police are likely to catch wind of it. When you see someone heading to the ATM, that'll be your target.

Once you've beaten the money out of them, you may need to hide out somewhere. Usually, the safe house is a good bet but you might be able to find somewhere closer. Do this enough times, and you should have some nice padding for your bank account.

Take On Some Assassination Jobs

Engaging in hits is another prime way to get some cash in your account. Additionally, there are a decent number of hit jobs you can take on that will not only pay well, but also make it a little easier to win in the stock market world.

When you're looking for the ideal money-making assassination missions, you'll want to seek out a man named Lester. You'll be likely to cross paths with him at some point throughout the game, so remember who he is and how to contact him.

Then, seek him out when you want to make some relatively easy cash. Get ready to be stealthy, or at least be prepared to high-tail it away from the cops. It'll do you no good to be caught, and if you get killed in the process there will be less money for you to enjoy in the end.

Racing is a fantastic way to step out of the standard GTA 5 world and missions and make some serious cash. In order to get the best possible results, you're going to need to engage in these races as Franklin. No one else has the special bonus he gets while racing. 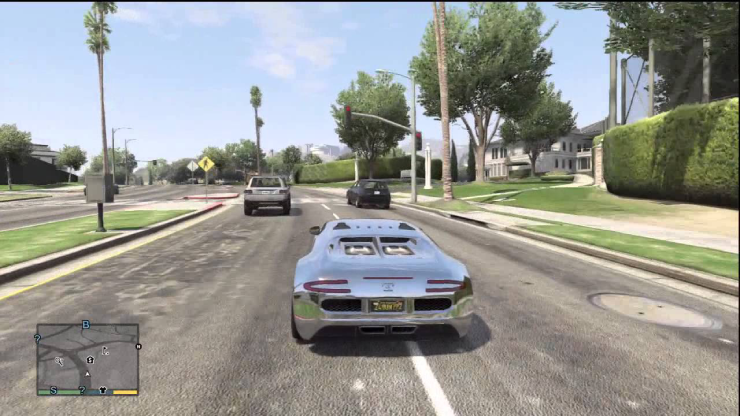 You're also going to need the perfect car to ensure you come in first place every time. While opinions may vary, the Coil Voltic is a tried-and-true option that many will swear by. That's especially true when it's fully customized in order to provide the best possible performance.

Before you start a race, you'll need to make sure that Franklin has plenty of "talent" to offer. You'll be able to see this in the form of a yellow bar on your screen. Keep that bar full, and you'll have no trouble winning every race you enter.

When you get sick of robbing individual people, you can take on slightly larger robbery jobs that'll pay out thousands of dollars. By taking a look at your in-game map, you'll be able to see where various armored trucks are in the world in the form of blue dots.

While you're near these dots, you'll be likely to notice someone carrying a briefcase to or from the truck. At this point, you have two options. If you don't mind a bit of a police chase, you can simply steal the truck while the briefcase is still inside.

On the other hand, you can also simply shoot the person holding that case while they're somewhere between the truck and the location. Either one can work, but you might find that one method is a little easier than the other. It's up to you to pick the one you like the best!

Spend Time With The Stock Market

While investing in the stock market may not seem like the most exciting activity to engage in while you're playing a game, it's one that can help you to win big. Just like in the real world, the goal is to buy stocks when the prices are low, then sell them when they are worth more money. Each time you sell a stock this way, you get some extra coins in your pocket.

You'll also be able to check in daily to find out whether or not your stocks are doing well. Keep an eye out for which ones are increasing in price and try to get in on them as early as possible. Then, make sure that you sell before the price drops too low. You'll have to pay careful attention to the trends, otherwise you could end up losing money rather than gaining it!

Ammu-Nation is a great resource when it comes to registers to empty out. On top of that, those registers fill back up pretty quickly, so you won't need to wait too long to rob a store again. Just make sure that you do it right and avoid getting caught, or you may find that it's not quite as rewarding as you expected the endeavor to be.

One of the best methods out there is to take care of the NPC in the store from afar, before he has a chance to call out an alert. Then, empty out the register as quickly as you can and hit the road. You'll probably need to lay low for a while until the cops stop searching for you, but as soon as the drama has died down you'll be able to reach into that register again.

All over the GTA 5 map, you'll find that there are treasures you can hunt for. In-game, these tend to be known as hidden packages, and they can be quite tough to find. However, you're likely to discover that they are well worth the effort. 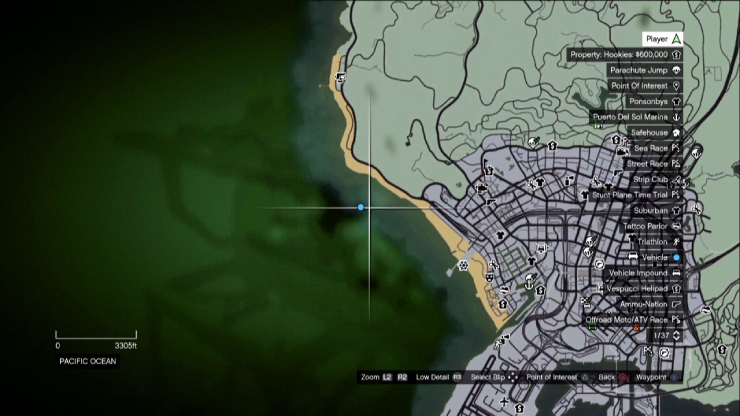 In these various packages, you'll find financial gains that can range anywhere from $5,000 all the way to $25,000. That's definitely nothing to sneeze at, and it's sure to help quite a bit on the way to making all the money you possibly can. If you're playing an older version of the game, then you may also be able to grab these packages more than once.

Perform Your Own Drug Bust

Those who are looking for a big score and don't mind spending some ammo to do it will find this to be a suitable endeavor. You'll need to begin by checking out the eastern side of a mountain by the name of Chiliad. Here is where you'll find a drug-production location just waiting to be robbed.

Once you're able to break into the storehouse, you'll be able to rob it and make a pretty penny. The amount you receive isn't always the same, but it typically amounts to at least $60,000. That's an amount that is well worth the effort!

Chop, Franklin's dog, has a nifty ability to find things that would otherwise require a whole lot of searching. As you walk around with him, he'll be able to locate all kinds of items that you can turn around and sell for a few pretty pennies.

For dog lovers, this is a great opportunity to enjoy some dog-walking time. It also can't hurt to know that Chop will almost certainly back you up in a fight, taking on anyone you point out to him. He's more than just man's best friend, he's also earning his keep!

Take On Some Heists

Heists are a fantastic way to move your storyline along and earn a decent amount of cash at the same time. Just make sure that you have a reliable team that can provide the greatest benefits for the lowest cost.

This is going to mean something different to everyone who plays. Some may prefer to invest in criminals who they know will ensure that the job gets done. Meanwhile, others prefer to pay the least and take on crew members who won't require such a huge cut of the rewards. You'll have to try out both to discover which is really better.

Unlike in the real world, the world of GTA 5 gives you the chance for a little bit of control over the stock market. Through acts of violence, you can ensure that the stocks you're invested in grow and the competitors lose a great deal of demand.

You can go about this through simply taking out members of the competition, or by decreasing the demand by making the competitor products unsafe in some way. For example, if people start to learn that a certain kind of car is being terrorized regularly, it's likely they'll choose another kind of car instead.

Challenges are another great way to help yourself save some money. They can allow you to get things like discounts or even free services when you've completed all the challenges of a certain type. For example, finishing up all the gun challenges successfully will allow you to buy guns and ammo at only 85% of the cost they used to be.

Additionally, there are a variety of glitches you can make use of to save money, such as logging out and back in to avoid spending money on car repairs. When you learn how to use the challenges and glitches successfully, you can save yourself thousands of dollars.