Shadowgun Legends: One Of The Best Shooter Games 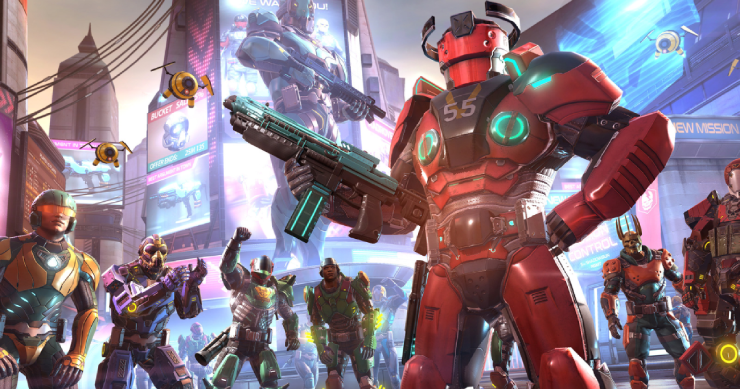 Back in 2011 Shadowgun offered unapparelled graphical presentation along with a solid campaign and control scheme that worked rather well on touchscreens.

Before Shadowgun we had mobile shooters with horrendous controls, which looked like bad Nintendo DS ports. After Shadowgun other developers copied the formula and the mobile FPS games market simply exploded.

Many modern mobile shooters have lots to thank to Shadowgun. But these times are long behind us and instead of sleeping on their laurels, people at Madfinger Games chucked one hit title after another.

Their latest game is called Shadowgun Legends, and it's probably the best mobile shooter at the moment. It stands alongside behemoths that are PUBG Mobile, Fortnite, and Call of Duty: Mobile, and is one of the most popular shooters on the market.

Each of these games has its own niche they're serving (with PUBG and Fortnite both taking the battle royale piece of the pie) and Shadowgun Legends is here for all fans of looter shooters.

This is basically Destiny 2 for smartphones and back when it came out, in late March 2018, many touted it as better than Destiny 2. While this might sound preposterous, many of us who played Destiny 2 found that Shadowgun Legends offered more content, was free, and in general, was more polished when it came out compared to Destiny 2.

Of course, Destiny 2 received a bunch of content since then and is clearly a better game today, but back in the first half of 2018, the mobile Destiny was just as good, if not better, than the original. 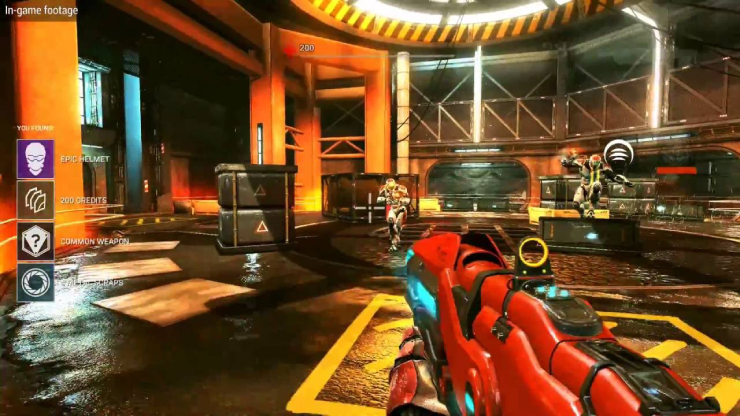 The story is basically just a placeholder so let's cover it first. Basically, the world was invaded by some alien bad guys called the Torment.

You, as part of the elite military organization known as Shadowguns, are tasked to repel the Torment, which you do across a bunch of solo and co-op missions.

The overall atmosphere is over-the-top ridicule of similar looter shooter games. Think what Saints Row did with the GTA formula and you get the picture what the game is all about. You're like some super cool super soldier and you and your buddies take missions that play like 80s action movies.

Lots of shooting and lots of one-liners. Like Duke Nukem, but good. Anyway, you don't need to know the story to enjoy the game and that's what we recommend for every player. Just forget about it and enjoy the ride. Because Shadowgun Legends has a lot to offer.

The prettiest of them all

The first thing you notice once you start the game is the phenomenal visual presentation. The game simply shines. Stunning lighting with advanced effects such as realistic bloom and even ambient occlusion.

High-def textures that look better than on last-gen consoles give the world a coat of realism. Detailed objects and character models are simply too good to be fully enjoyed on a small screen of your smartphone.

The game's a stunner and we can freely say that Shadowgun Legends is the prettiest mobile game at the moment. It has the looks of a full-fledged console game. Once you see it in motion you are left speechless. Enemies look amazing and their animations are lifelike and believable. 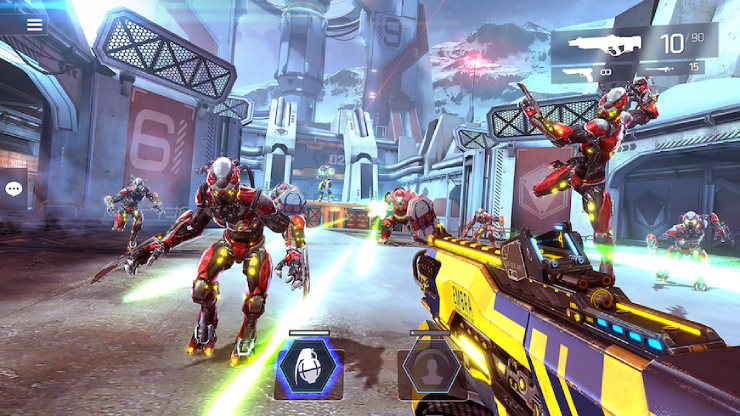 Detailed weapon models make you appreciate your guns and motivate you to unlock more powerful weapons. The central hub, where you receive missions and buy and sell equipment is better looking than The Tower in Destiny 2. Everything shines with bright neon lights.

Buildings are the general architecture are detailed and not just bland backdrops that should provide an illusion of a bigger world. And there are just so many details there; stores and quest givers, Shadowgun heroes of the day; ads and jumbo screens notifying you about special events and such. It all looks so beautiful.

The negative side of having a stunning mobile game is that map design is far from the semi-open world we have in Destiny 2. Here, maps are relatively small and filled with artificial borders such as closed doors and passages. Basically, most missions take place on larger maps that are divided into lots of smaller parts.

Because there's a limited selection of maps you will find yourself often returning to maps you've visited before. During each mission, another section of the map will be open for you to explore. This allows players to gradually learn about maps and after a while, you will be able to know where are you and where you need to go from the moment the mission starts.

A similar thing can be said about PvP maps. They are smaller than in PC and console games. This may seem like a negative thing at the start but after a while, you'll find out that map layouts are really easy to learn. This is great, especially for casual players. 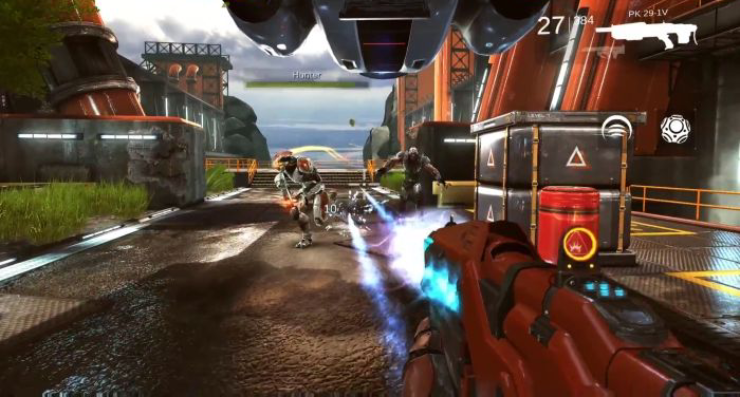 Further, you don't have to wait for action. Once you respawn you need just a couple of seconds to join the big gunfight because maps are smaller. There aren't many of them but because PvP isn't the main focus in Shadowgun Legends, you won't get bored that easily.

Each map is unique and looks stunning, like the rest of the game. Lots of detailed architecture that doesn't repeat. Amazing texture work.

Incredible lighting that creates a unique atmosphere for each map. Sure, PvE maps aren't near the size of the maps we have in Destiny 2, or the immense open-world map of Washington we have in The Division 2. But for a mobile game, maps in Shadowgun Legends are some of the best we've seen.

The game offers multiple levels of visual settings, so it should work even on phones that came out years ago. The performance is slick and we didn't experience any problems while running the game on the High visual setting.

Trying to play on Ultra introduced some lag and stutter on a device equipped with the Snapdragon 835 and 6 gigs of RAM. So yes, the game is demanding but it looks amazing. The only negative thing we have to say about the technical department are long loading times, and lots of them.

Since missions are rather short, expect lots of loading. Just imagine playing Destiny 2 on consoles but instead of loading only when visiting the Tower you get a long loading screen after every checkpoint.

All those looking for a mobile shooter to play on a daily basis rejoice. Shadowgun Legends is packed with content. You can play 200 single-player missions, each one supporting co-op. Just grinding through the campaign missions can last for a month. You also have Raids, which can be played with two other players.

These are like mini Destiny 2 raids that can be completed in 20 minutes or so. The huge boss is at the end of each one, carrying powerful loot. Arenas mode is like the Horde Mode in Gears of War. Another game mode made for co-op that awards new loot.

You also have daily missions called Operations, allowing you to grind for in-game currency (more about in-app purchases at the end of the review). And then you have the PvP modes that include Duel (one vs. one), Ascendancy (a classic 4 vs. 4 team deathmatch), and Elimination (Destiny 2 Survival but with teams of 4 instead of 3). 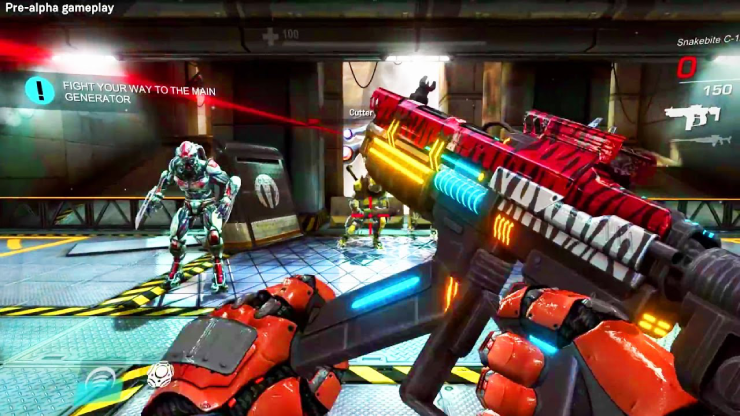 Then you have the loot. There are 600 guns in total, most of which can be obtained just by playing the game. You can also get more than 1000 armor pieces and 60 full sets of armor. There's also a bunch of vanity items that are mostly locked behind a paywall.

But all armor pieces and weapons can be obtained just by playing the game. As is the case in other looter shooters, the best gear is reserved for raids and special events.

The game is teeming with content and you can sink hundreds of hours into it. Like every quality looter shooter, the influx of loot is constant, always containing gear that improves your stats if just a bit. You are rewarded after each mission, each multiplayer match. Honestly, Shadowgun Legends is one of the most rewarding looter shooters on the market.

Finally, if you want to play the game solo, no problem. Every story and side mission can be finished in solo mode and raids are relatively easy to finish with random people. They don't require teamwork and constant communication like in Destiny 2 or The Division 2. You can complete every single missions on your own.

Madfinger Games know how to make an enjoyable mobile shooter and Shadowgun Legends has intuitive touchscreen controls that are simple to learn.

The left side of the screen is used for moving, the right side for aiming. The game offers automatic fire once your aim reticule is over an enemy but you can change the fire mode to manual. We prefer the automatic setting but those who spend most of the time in PvP mode might prefer the manual fire button.

Double-tapping the screen brings aim down sights and there are also special moves assigned to buttons on the bottom of the screen.

The game supports a plethora of gamepads so in case you have one, it will probably work without any problem. 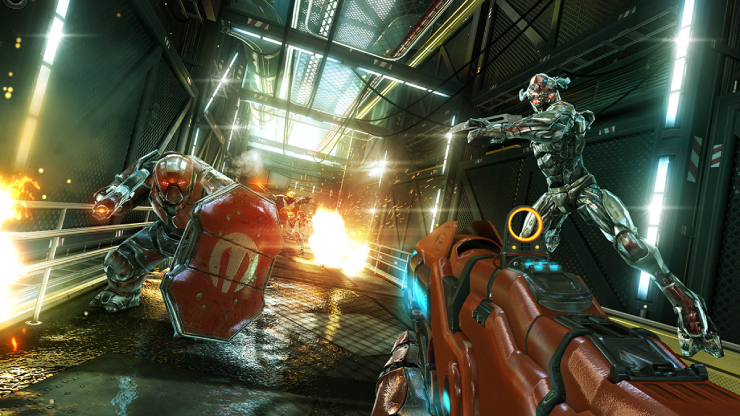 Touchscreen controls are great in case you have a tablet device. They are more precise on a larger screen but even on our 6-inch smartphone, we managed to hit enemies without trouble. Landing headshots is a bit tricky when playing PvP multiplayer but we didn't really dive too deep into PvP. Overall, controls are simple and easy to learn.

Gunplay is great. Weapons are enjoyable and have that nice kick to them. Coupled with great sound design, it's really enjoyable filling bad guys with tons of lead. Each weapon type behaves differently and we really like the physicality of shotguns and heavy machine guns. Overall, this is one of the best mobile shooting experiences. On par with Call of Duty Mobile and PUBG Mobile.

Shadowgun Legends is a free-to-play game and as such, it comes with in-app purchases. Microtransactions can be completely ignored, except the one that gives you more inventory space. First of all, this is a looter shooter and having larger inventory is always welcome.

Sure, you can play with the small starting inventory but that's a huge pain. If you like the game we recommend you to invest a couple of bucks into getting a larger inventory. It makes the game much more enjoyable.

Other in-app purchases can be completely ignored. You have special gear that is better than regular pieces. These pieces of gear can only be bought with premium currency. The thing is, these bonuses are minimal and won't affect your power in PvP modes. There's also a bunch of cosmetic items that do nothing except make your character pretty.

Overall, the microtransaction situation in Shadowgun Legends is really good. After investing in a larger inventory, you don't have to spend a dime. And since the game can offer hundreds of hours of the best looting and shooting on mobile devices, spending a couple of bucks is definitely worth it.

And no, you don't have energy points here that limit the number of missions you can play. You can play the game for 20 hours straight if you want, there are zero limiting factors here.

Shadowgun Legends is an amazing mobile game. It has it all. Tons of stuff to do. A bunch of game modes. Mountains of gear to collect. Great gunplay. Superb visuals. And, most importantly, it won't force you to spend lots of money to stay competitive or even just to play the game. If you're looking for a looter shooter to play on your mobile device this is by far the best choice.