Published in Gaming on 5th February, 2020

Final Fantasy Brave Exvius is basically a full-fledged Final Fantasy title for mobile devices. Find out answers to some of the most popular questions about the game here.

When Square Enix launched Final Fantasy Brave Exvius in Japan back in 2015 the company probably didn't expect the game to become an extremely popular mobile title it is today.

A year later worldwide release brought Final Fantasy title that was built from the ground up for mobile devices to the international market and fans loved it. 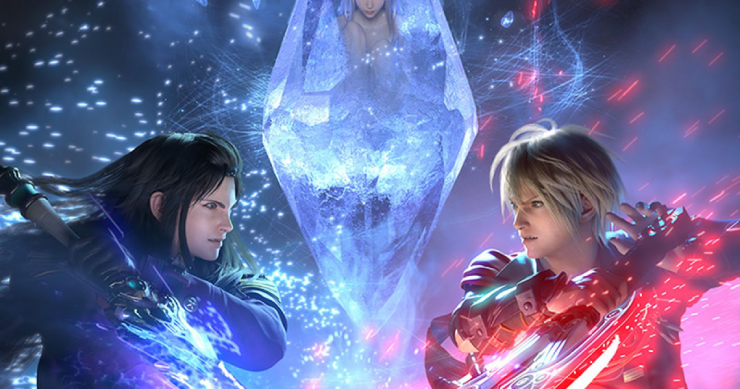 What they also love is the fact that Square regularly updates the game with new content and heroes to play with. Today the game features more than one hundred playable heroes and multiple story campaigns that can take dozens of hours to complete.

If you jump into the game now, you can have literally months' worth of fun. The game has a lot of going on in it but before you dig in check out answers to most important questions every new player might have about the game.

Can you play Final Fantasy Brave Exvius on PC

Yes, you can. There are two main ways to play the game on the PC. The first way is installing the game and playing it via the most popular Android emulator for PC, BlueStacks.

First of all, you'll need to download and install the emulator. You can download BlueStacks by visiting this link.

Once you download and install it, open the app. After the initial setup (which is really simple) you can just click on the Search bar located at the top of the app window and type Final Fantasy Brave Exvius. Alternatively, just visit this link and download the game directly from the BlueStacks website.

The issue some players who play the game on BlueStacks might run into is low performance. The game doesn't perform well on many configurations resulting in low framerate, choppy animations, and other problems.

The game's playable in most cases but if you experience extreme slowdowns there is a way to play the Japanese version of the game natively on PC. This way the game performs much better but, well, everything is written in Japanese.

If you played the game before however, you should navigate the menus easily even if you don't know what's written. Now, here's how to install the game.

First of all, visit the AndApp website. It's a Japanese app that runs the native PC version of Final Fantasy Brave Exvius. Click on the button located on the upper right part of the screen. It reads AndApp and PC with many Japanese characters in between. 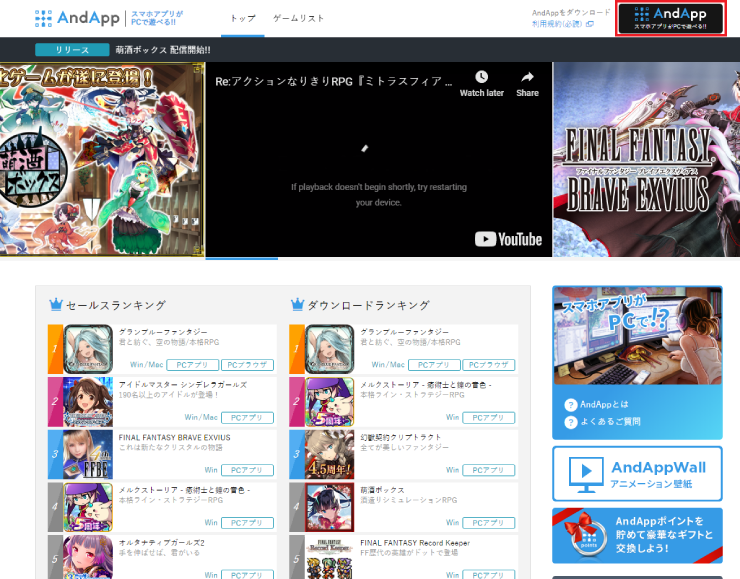 Once the game downloads open the AndApp application and in there you'll find a bunch of games (mostly mobile JRPGs titles) that can be played.

Locate Final Fantasy Brave Exvius and click on Play Now. Now you have to wait for the game to install (you might need to locate the game download). Once the installation finishes you can play the game on your PC with amazing performance!

And if you want to transfer your account to the AndApp version of the game follow this visual guide. That's it! The video linked below explains how to download and play the game in great detail. Shouts to Umbra Rays for making the guide!

Can you play Brave Exvius offline?

No, the game demands constant internet connection. As soon as you disconnect from the internet the game will close.

How do I get Espers in FFBE?

The first Esper, Siren, is awarded to you during the story campaign. Just play the story and you'll get it. Other Espers are hard to find. Luckily, we will explain how to obtain every single Esper available in the game at the moment.

Just follow our guide and you'll complete your Esper collection in a jiffy. Remember that you have to fight every Esper before obtaining it.

How to get Ifrit

Ifrit is hiding inside Inferno Hollow dungeon. First, you have to speak to the two persons in the Port City Lodin. We marked the two in the image below. Once you speak with them a new town called Ordol Port will become unlocked. 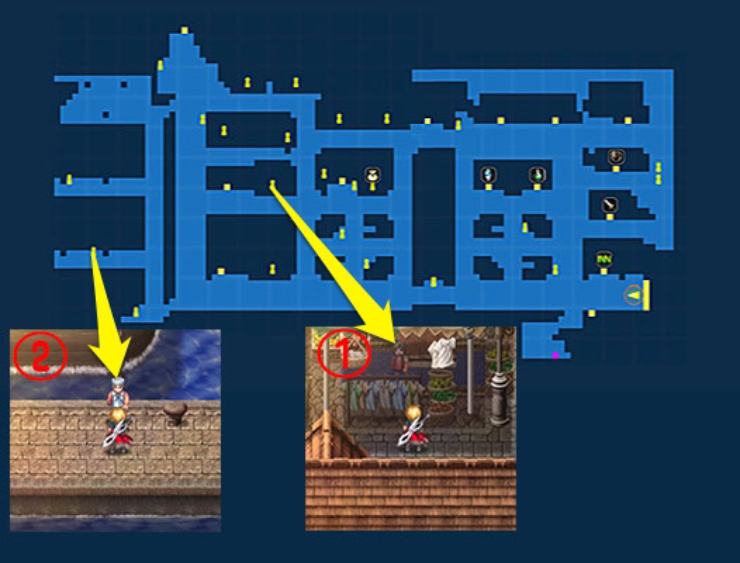 Once there, find the little boy and speak with him. The boy is located in the southeast part of the town. After you speak with him Inferno Hollow dungeon will unlock on the world map.

How to obtain Golem

Reach Zadehl Westersand - Exploration. Look for a guy lying down in the sand. Speak to him and he'll ask you to bring him some water.

Get the water from the nearby oasis and return to the thirsty dude. Next, finish the exploration, do not "Give Up." If you give up you'll have to do it all from the start. Once you finish exploration the Zadehl Southersands dungeon, where Golem is hiding, will become unlocked.

How to obtain Shiva

First of all, you need to defeat Frost Dragon located in Wolfsfang Peak - Exploration. Once you're victorious you will receive a message telling you about a distant sound.

After the message plays a new path will be unlocked. Follow the path (do not exit the Wolfsfang Peak dungeon) and you will unlock the Lanzelt Mountains dungeon where Shiva is waiting for you.

How to get Ramuh 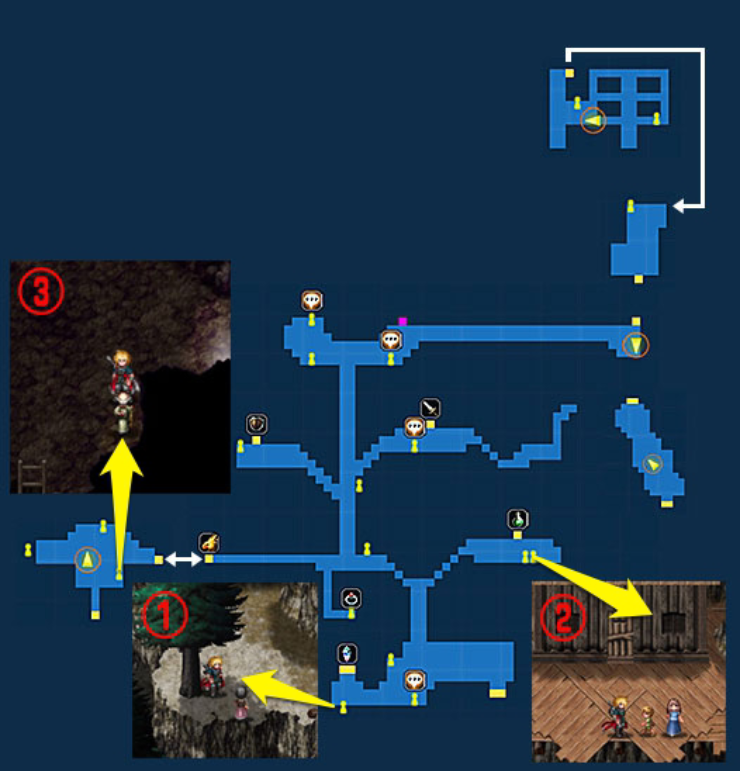 How to get Diabolos

Just visit Industrial City Dilmagia and speak to the two people marked on the image below. Once you speak with them a dungeon with Diabolos will become unlocked on the world map. 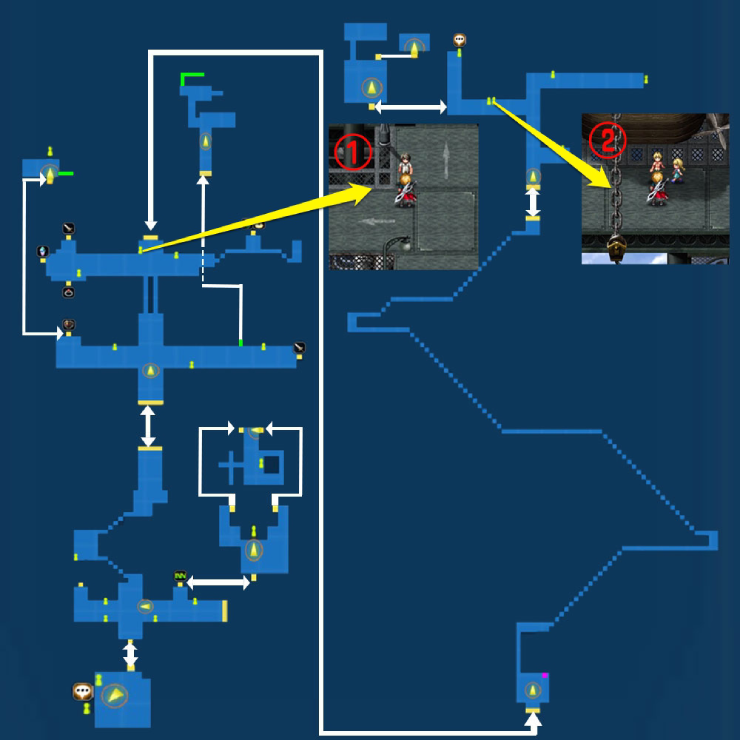 How to get Carbuncle

First of all, you need to clear Water Shrine. Once you do that speak with the main in the shrine and then take the exit from the town. 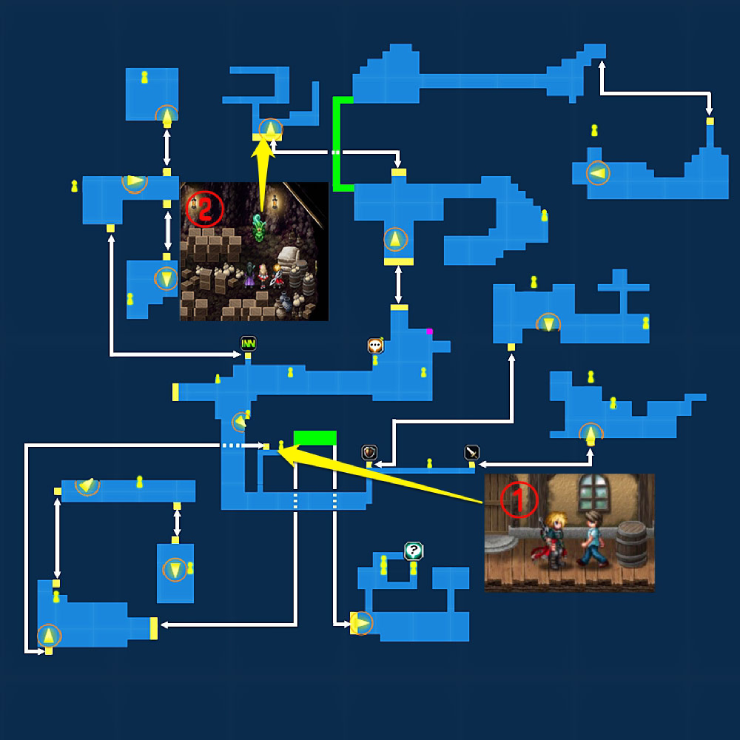 Both the man you need talking to and the exit are marked on the image below. Once you reach the cave (after you exit the town) you will meet Carbuncle. After you meet them return to the man you talked to and the Carbuncle Grove dungeon will unlock on the map.

How to get Odin

Reach Downtown Zoldaad and speak with people marked on the image below. Once you speak with them the Eroded Castle dungeon, where Odin is waiting for you, will become unlocked.

How to get Titan

In order to start Titan quest you have to finish Missidia Story. Once you finish that story go to Missidia Underground Exploration and locate the black mage (he's easy to locate). 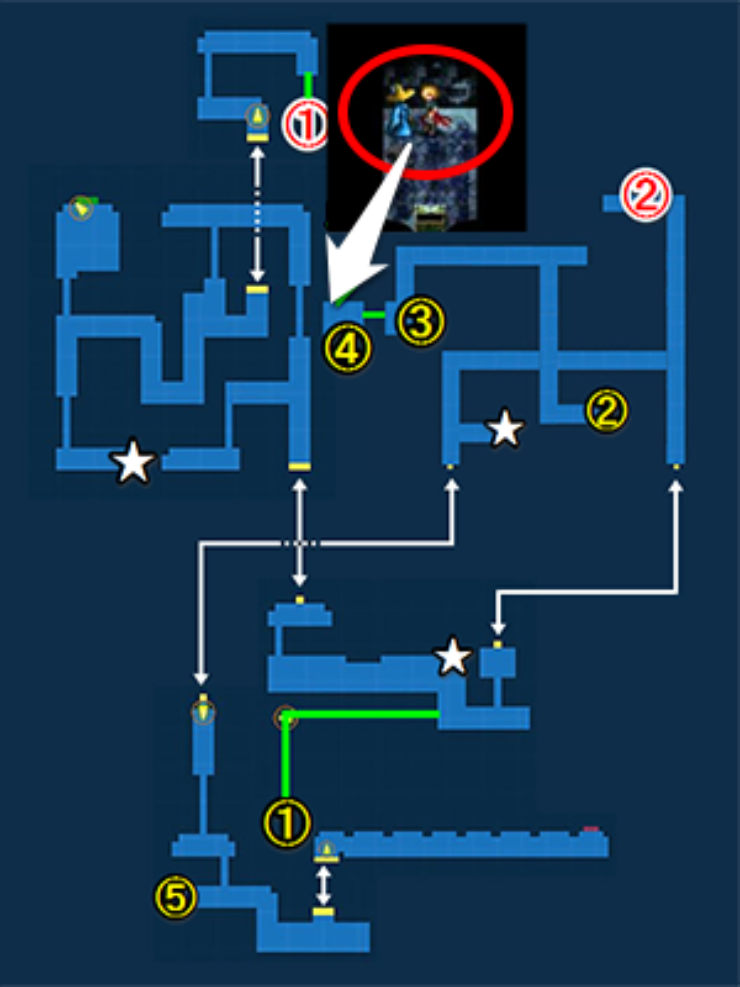 Speak with him and he will tell you about the Hidden Black Mage Village. Go there and speak with two persons marked on the image below. After you speak with those Titan's Cave where Titan is located will become unlocked.

How to get Bahamut

Bahamut is the best Esper in whole Final Fantasy Brave Exvius and he's pretty hard to obtain. First of all, you have to complete Chapter 1 Story.

If you've completed Chapter 1 you have to reach Downtown Zoldad after you beat Chaotic Darkness. There, go to the castle and search for Evan. Speak with him and he'll unlock a new map on the World Map.

Go to the newly unlocked region but make sure to prepare before visiting it. First of all, equip a couple of tents (we recommend seven or more) in your item list. Next, make sure to have 2 units that have escape ability. Also, take some tanks with you, you will face lots of tough ambush battles.

Once you go to the Summit zone (center location) search for Bahamut Shadows. These enemies have a chance to drop Rat's Tail needed to activate the fight against Bahamut.

Once you get a couple of Rat's Tails save your progress. Next, complete any stage in the current exploration zone. After you do this equip Rat's Tail in your inventory.

Next, go to the Eternity Zone and reach its summit. There, reach the end of the map (reach the summit) and there a bridge made of light will appear. Cross the bridge and there Bahamut will wait to fight against you. Remember, this fight is extremely tough so make sure to take your most powerful units with you.

How do you fill an Esper gauge in FFBE?

Next, Setzer and his Prismatic Flash generate lots of Esper stones. Use him each time you have Esper challenge. Maxwell's LB can charge the Esper meter quite often. Finally, Garnet's and Rydia's LBs are also great to farm Esper stones.

How do Espers work in FFBE?

In Final Fantasy Brave Exvius Espers have two roles. First of all, they enhance your units. You need to equip Esper to a unit in order to get its enhancements. Once you equip a unit with Esper the unit will increase their stats by 1 percent of Esper's stats. It isn't much but it helps.

Remember that different Espers give larger stats bonuses to specific unit types. Physical DPS units gain most when equipped with Odin, Golem, Diabolos, or Titan. Shiva, Ramuh, and Diabolos should be coupled with Magical DPS units.

Carbuncle, Ramuh, and Shiva are best when equipped with Healer units. Golem and Titan are great with Tanks. And Siren and Bahamut can be coupled with any unit. Espers also have powerful summon skills that can be used when you max out your party's Evoke Gauge.

Espers can be leveled. With each new level, they receive Skill Points (SP) which you can use to train them. Training Espers increases their stats and unlocks new skills.

You level Espers by feeding them Magicites. These power stones can be obtained in many ways.

You can get Magicites by finding collection stones in exploration dungeons. By exchanging Arena Medals. From time to time a Vortex dungeon called Chamber of Sacred Crystals will appear and there you can find a bunch of Magicites.

Once an Esper is leveled to level 30, you can visit the dungeon where you first obtained it. There, a stronger version of your Esper will wait for you to fight it. Once you defeat it, your Esper will reach 2 stars. Once you get a 2-star Esper they can gain 40 additional levels.

You can use Espers in battle by filling up the Evoke Gauge which is also called Esper Gauge. We already explain how to fill up the gauge above. Remember that you can summon only one Esper per gauge.

How do you evoke Ifrit?

In order to evoke Ifrit kill Glacials first. Next, hit small birds until you kill them all. Finally, target the big bird. You will probably have to repeat the trial because the Evoke Ifrit mission is granted by chance.