Gone Home, the granddaddy of walking simulators, came out seven years ago. is the game still brilliant, genre-defining story experience as it was in 2013? Find out in this review.

Gone Home and Dear Esther are two games responsible for popularizing the walking simulator genre. This, once a derogatory term, was embraced by the games of the genre and over time it became something completely different. 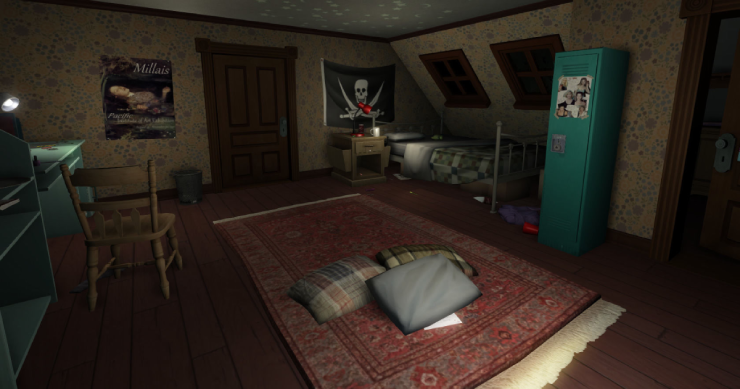 It became the accepted name for the whole genre, defying the naysayers and those who thought they would mock these games by calling them walking simulators.

Seven years passed since Gone Home came out. This genre-defining title was surpassed by other games. Games such as Firewatch, What Remains of Edith Finch, and Fulbright's own Tacoma. But Gone Home is still worth playing in 2020 and here's why.

The game starts with the main protagonist, Katie Greenbriar, returning home in mid-1995, after traveling across Europe for a year. She arrives at her family's new home, a spooky mansion in the forests of Oregon, in the middle of the night.

From the moment it starts, Gone Home introduces players with its dark and moody atmosphere, augmented by a wicked thunderstorm raging outside. The house is empty, and Katie finds only a message from her baby sister, Sam, that she's not here and that Katie shouldn't look for her. This intro sequence sets the stage for a perfect horror title.

And that's how you will probably experience the first part of the game. Even though, by now, you probably know that Gone Home is away from the horror genre as possible, the game's atmosphere is moody and pretty chilling during the initial exploration of the mansion.

Lights flicker; no one is in the house; loud thunders break the silence and give you goosebumps every couple of minutes. The discovery of the fact that the previous owner, Katie and Sam's father's uncle, lived all alone in the mansion for decades, doesn't help in making the exploration of the manor any less spooky.

But after a while, you stop worrying that a monster or ghosts will jump from the darkness. You realize that Gone Home is an intimate exploration of the house dotted with various written clues that tell the tale of Sam's year at the new school and family affairs during the year Katie was absent.

But the subconscious fear of the unknown fueled by the ever-present darkness and loud thunders stays, creating a unique atmosphere that is the defining part of Gone Home.

That inexplicable fear that stays with players throughout the game makes exploration more detailed and more enjoyable. We are more focused while being afraid, and that helps when playing this game.

Since the game is filled to the brim with interactive objects that attentive exploration allows players to spot almost every piece of lore available. And there are tons of those. The most important ones, that push the main narrative forward, are relatively easy to spot.

But other documents and items are sometimes hard to spot and here is where the attention-enhancing fear of the unknown comes to play.

The main plot in Gone Home is about Sam and her first year at the new high school. The story is told via pieces of diary narrated by Sam, which activate as you interact with certain documents and objects. Since her family moved into the manor in the forest, the home of a mysterious individual who was the local weirdo, Sam was the talk of the town when she moved in.

Everyone started mocking her and she didn't really have an easy time during the first couple of months. But soon she meets Lonnie, another girl from the school and the rest of the game follows their evolving relationship. The story is a timeless coming of age tale. 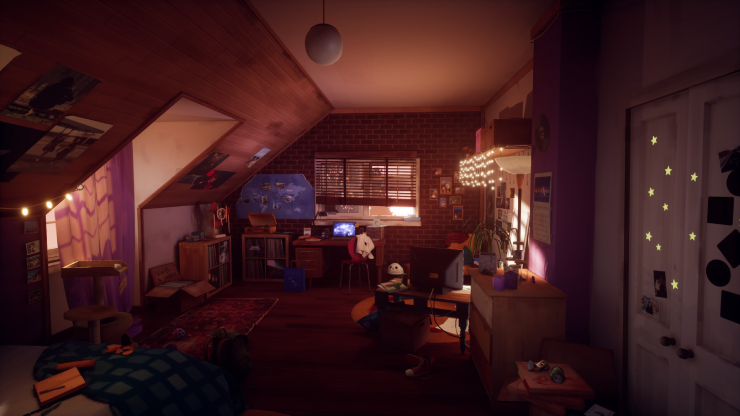 Of the first love, of the generational gap between parents and children. Of finding yourself in the chaotic storm that are teenage years. Of trying to be happy even when circumstances aren't turned in your favor. It's intimate, well written, and perfectly paced.

But side plots found in Gone Home are equally enjoyable to unfold. These include three stories. About Katie's mother, father, and her great uncle who lived in the house before her family moved in.

These aren't as richly covered as Sam's story but are equally interesting to unveil. Katie's father is a writer with two relatively successful books behind him. He now tries to move on with his life and to write another book. But something always leads him to ruminate about his childhood years. Her mother is a successful wildlife conservationist but she and her father have certain difficulties in their marriage, and you find out more about the issue while exploring the house.

Finally, Katie's great uncle was a well-respected individual in the nearby town for years. And then, suddenly, he sold his pharmacy and retreated to his house in the forest where he spent decades in solitude until his death a year before the Greenbriar moved into it. You'll try to find out the reason for his sudden escape from society.

These four stories that make Gone Home are unveiled while you explore the huge manor. And the design of the house allows players to explore it in a natural way, without backtracking. The game is designed as one big roundabout exploration of the house. You can begin the game either by exploring the left part side of the ground floor or by visiting the top floor.

Then you go to the enormous basement which leads to the right part of the ground floor, which is locked at the beginning of the game. Finally, the game ends in the attic.

This circle-shaped exploration loop is quite an enjoyable experience. There's the constant feeling of finding something new since the game doesn't force players to backtrack and visit areas they already explored. Each room is filled with a bunch of interactive objects but only a handful contain story bits. 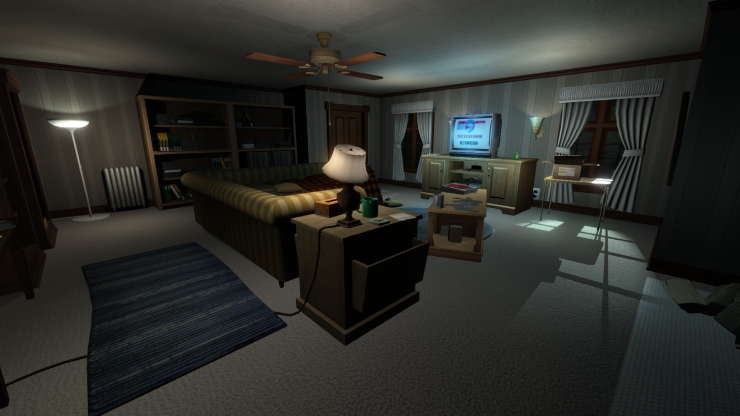 This might annoy some players but for others this is great because, after a while, they will begin to check every item, leading to them finding most objects that contain important information about different story plots.

And the irrational fear that is stuck into the back of our brain helps players to spot almost every object in the house, which increases the chance of you finding every bit of lore even during the first playthrough.

Some items are hidden behind others, some require players to crouch and look under the bed. Some are hidden inside closets. This keeps the players engaged and doesn't make the game a completely linear experience. You have to actively explore rooms around the house in case you want to find out everything.

It's a good thing that some pieces of the story are hidden away from the main path because Gone Home almost completely lacks any puzzles. But by actively exploring every nook and cranny of the house you will earn at least some sense of accomplishment.

Gone Home is accompanied by a minimal-style original soundtrack that doesn't surface very often. There are cool compositions during the Sam diary narratives and they are quite pleasant. Also, the game plays bits of the score at important moments of the story, which are also rare and far away from each other.

There are also a handful of songs by various riot grrrl bands, real and fictional, that can be played when you find cassettes scattered across the house. And some of the songs are really good. Luckily, you can play them as many times you want, which is a small but really cool addition.

The game is mostly completely silent. You only hear your own steps and occasional loud sounds of thunder most of the time. This, in combination with the period Gone Home takes place in, creates a sort of a melancholic feeling later in the game, once the fear (aside from the unconscious part of it) wears down.

Back to the nineties

The time period Gone Home takes place in is another, if subjective, positive of the game. If you grew up during the nineties, you will find lots of nostalgia pieces in Gone Home. Old-school cathode-ray TVs. Super Nintendo cartridges. Street Fighter II move lists written on paper.

Music zines with lots of 90s bands such as RATM, Soundgarden, Dinosaur Jr., Biohazard, and Tool. VHS tapes with lots of cult 80s and 90s movies such as Robocop, Blade Runner, JFK, Beetlejuice, Ghostbusters, Airplane! and many others. X-files and the famous I Want to Believe poster. Letters instead of emails. School chats written in paper instead of on a smartphone screen. 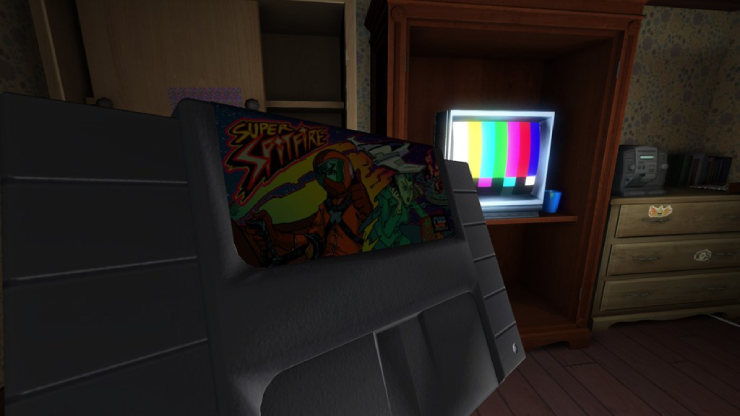 AV cabinets. Board games and TV guides. Independent music zines that were part of the underground music movement, which circulated from person to person. Demo tapes that were the only way aside from gigs for new bands to gain following. Those were the days.

Walking the corridors of the Greenbriar family house and discovering new things is so enjoyable. You find something new in each room, and most of these finds will momentarily trigger distant memories in all of us who lived in those times.

If you grew up, or were adult, during the 90s Gone Home won't be just an excellent story-driven game. It will also be a fantastic nostalgia trip that will resonate with you long after you complete it. You will complete the game in one breadth, which is one of the main issues with Gone Home.

Not all is perfect

Gone Home can be finished in a little under 2 hours. The game's just too short. Sure, there is plenty of stuff to read and discover but it all ends too soon. You will just get into the groove and will start loving the journey and it will end before it really started.

Of course, this is a completely subjective thing. If you're someone with limited amount of free time you will love the fact that you can finish Gone Home in less than 2 hours. And since the game is often seen on various sales where you can pick it up for just a couple of bucks, the short playing time is definitely worth the price of a cup of coffee.

And performance can still be troublesome at moments, even on a machine equipped with 7th gen i7, GTX 1060, and 16 gigs of RAM. But still, if you like this kind of games you will look past the aging visuals and will love the journey.

The final downside of the game wasn't a downside back in 2013 but it is now. The game contains almost zero puzzles or any other mini-games or such that enrich the experience. We don't mean that we want challenging gameplay elements, just things that can make the game more enjoyable and varied.

Games like What Remains of Edith Finch and Firewatch introduced various mini-games and other elements such as basic quests or cool but simple puzzles that really improved the overall experience of playing them. Sadly, Gone Home doesn't have any of that.

Ultimately, Gone Home still is an excellent interactive story experience. Everyone who like this kind of games will love this one. Its story arcs are really interesting to unfold, the huge manor offers lots for explorers, and the atmosphere is still superb.

On the other hand, if you want for your walking simulators or interactive adventures to feature puzzles and other gameplay elements that provide variations to the classic "walk and unfold the narrative" gameplay loop, or if you don't like games with aging visuals, maybe you should skip this one.