Is the last Battlefield game set in modern times dead? Is it still worth playing in 2020? We are glad to say that no, Battlefield 4 is alive and kicking, and the game is the best Battlefield fun you can have right now.

Battlefield 4 came out more than seven years ago. It was the most ambitious Battlefield game ever. Next-gen visuals, 10 large maps, an unmatched level of destruction, and lots of small yet noticeable improvements over Battlefield 3.

The game was so massive it imploded in itself, resulting in a messy launch plagued with all sorts of issues. DICE took the issues seriously and managed to fix server woes, awful hit detection, lag, audio, and visual glitches, and the game blossomed. It was super popular for years until sequels took the majority of its player base. 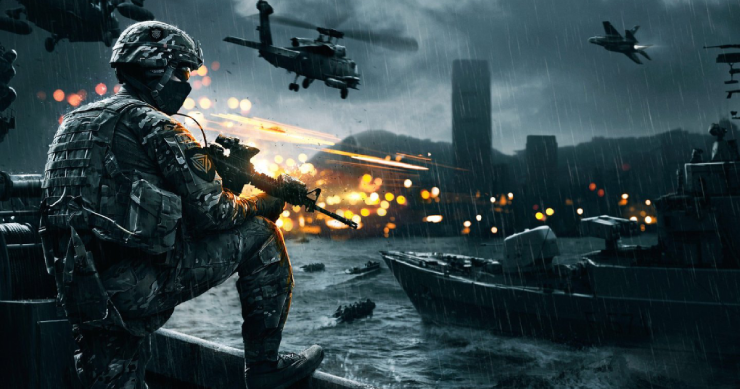 Today, in 2020, many would (logically) think that Battlefield 4 is a mostly dead game, with patches of hardcore players keeping it above water. But the reality is much different.

On PC and PS4, there are plenty of fully populated servers 24/7. You can find a server in seconds and then spend the whole afternoon enjoying fighting war on modern battlegrounds. If you're contemplating about getting the game or returning to it after a multiyear hiatus, all we can say is get in.

There are plenty of players around and many servers with lots (if not all) maps in rotation. Sure, there are lots servers featuring one map, thousands of tickets and Conquest 24/7 but you can find servers with DLC maps, rotating game modes, and matches that won't last two hours each.

Battlefield 4 is still a looker

When we returned to Battlefield 4, the first thing we noticed were the visuals. This game still looks pretty despite its age. That's mostly thanks to its majestic lighting engine. Everything is bathing in lush colors with lots of bloom and fantastic lighting effects.

Coming back from Battlefield V or Battlefield 1, this game is a breath of fresh air. Battlefield V especially has a sort of an unnatural color palette, somehow the lighting always feels a bit off. In 4, it sure can be overbearing at times with the aggressive bloom and super bright sun rays, but after you get used to, the game simply looks more natural and still very pretty. 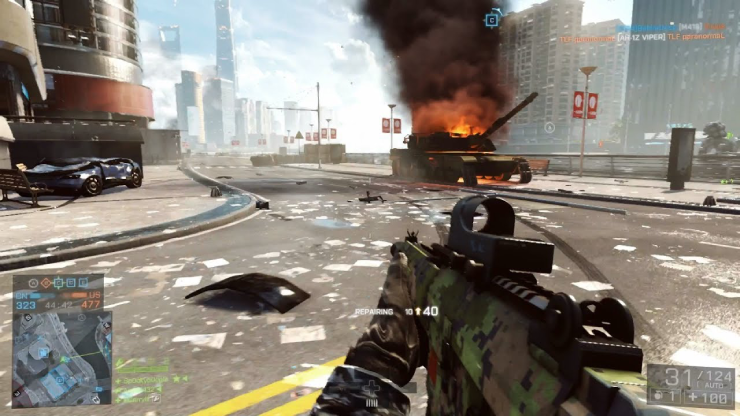 The second part of the visual equation is the destruction engine. The plethora of destruction tools you have on your disposal turns every map into a busted playground soon after the match starts. Almost everything can be destroyed and everyone is trying to cause as much ruckus as possible.

And this chaotic nature of Battlefield 4 never gets old. The sheer level of destruction is enough to disregard the game's age and happily play it on a daily basis in 2020. Other stuff such as models and textures aren't as impressive today as they were back in 2013, but they aged mostly gracefully and won't negatively affect your enjoyment. Overall, Battlefield isn't a stunner as it was back in the day, but it aged gracefully and still looks more than decent.

On the other hand, the game's single-player campaign aged like milk. It was vapid back in the day and, in 2020, it is a snoozefest par excellence. The 5-6 hours you would spend in it are better spent by staring at the wall, sleeping, or reading cringy Facebook posts.

Jokes aside, the campaign is not good at all. It's tedious, with horrendous AI, unimaginative story, forgettable characters, and lack of excitement. The story is seen countless times before in other games and movies. Missions can feel good at times but the occasional moments of excitement are buried beneath tons of rubble that are dull corridor shooting moments and cookie-cutter shootouts against dumb AI.

Oh yeah, enemy AI is bad. They behave like depressive robots, staying in place and waiting for you to kill them. They move around a bit from time to time and can occasionally take cover but that's about it. And then, if you play on higher difficulties, enemies will kill you with a couple of shots or throw grenades right under your feet with extreme accuracy.

It's so annoying to have grenades hit you time after time, during every mission, like you're constantly fighting against an army of the world's best quarterbacks. It's ridiculous. And then we have your teammates that are as lifeless and dumb as enemies. They often trail behind you so the campaign feels like you're fighting alone without any teammates. They aren't effective at dealing damage, only intensifying the feeling of being a lone wolf. 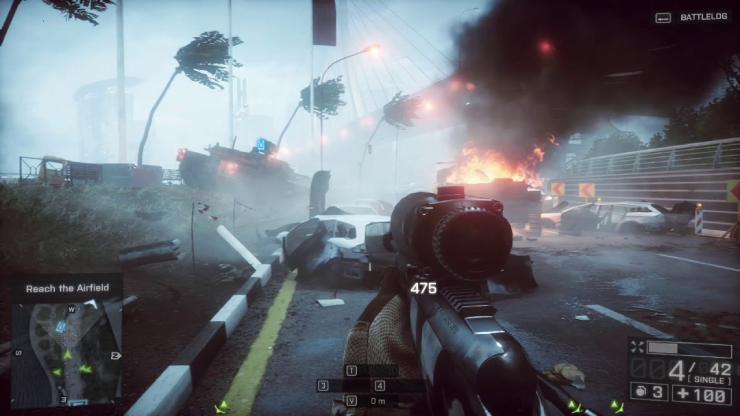 Missions can be fun at times, during over-the-top moments when you're destroying heavy armor or doing other stuff from action movies. But 85 percent of the campaign is boring as hell. The funny thing is that, compared to Battlefield 1 and V campaigns, this one is not that bad. At the end, Battlefield Bad Company 2 still stands as a Battlefield game with (by far) the best single-player campaign to date.

Sure, you can spend 6 hours playing the campaign. It's passable if you're a hardcore fan of first-person shooters. But our recommendation is to simply skip it and jump straight into multiplayer. That's where the fun's at.

Battlefield 4 comes with 10 maps in the base version along with more than 20 maps that were released as DLC. The sheer number and variety of maps is amazing. Sure, not all maps are played today on most servers but you can find servers that include DLC maps as well as regular map rotations, allowing you to experience most of the game's maps.

The quality of map design is ahead of both Battlefield games that came after this one. We have maps focusing on naval combat, tight corridor-like maps that work best in deathmatch, huge, open maps that are perfect for domination, smaller maps made for rush mode, etc.

Overall, Battlefield 4 has the best collection of maps out of all Battlefield games. Most of them work best at full size, in their Conquest version. But some such as Outbreak or Operation Locker are great for smaller game modes.

The return of classic maps from Battlefield 3 and 2 is another plus. We've got the best classic maps that stayed super popular throughout the years and their Battlefield 4 versions are great to play on. The inclusion of massive changes (calling those "levolution" is still cringy as hell) that affect maps after certain events take place changes the map design and the course of a battle like nothing included before or after this game.

Flooding the whole map, or trying to navigate increasingly stormy sea is something that works perfectly in a massively multiplayer shooter like this one.

Changing the complete outline of a map mid-match creates so many chances for teams to implement different strategies that might turn the tide of the battle in just a few minutes. This is something we really enjoy when playing this game. The knowledge that the map can get completely changed with destruction and then be changed again is something that keeps games from getting stale and repetitive.

The overall atmosphere of a massive, 64-player conflict is still amazing as it was in 2013. The earth-shattering noise coming from jets is so much more intensive than what you have in Battlefield 1 and 5. Next, the sense of destruction is greater even though the game doesn't include so much artillery bombardments and the sense of total chaos as its sequels.

It's probably because DICE put destruction in front of everything else, thus allowing for maps to change over time on a level we haven't seen in other Battlefield games. And the chaos caused by fast-moving vehicles and perfect map design is so overpowering during each and every match. 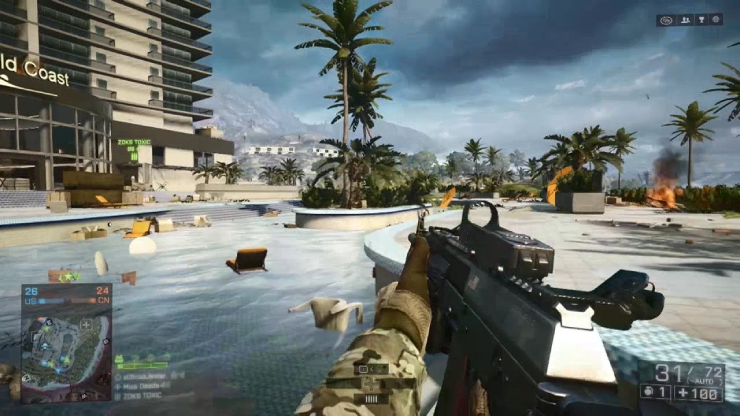 They can use gadgets to assist teammates in taking down enemies and enemy vehicles. They are able to reveal opponents on the map without diving straight into the slaughter. Rewards given for helping your squad also increase teamplay, giving players simple ways to assist their team without the need for voice communication.

And that's really important because the Field Upgrade system can be a difference in every game. By allowing everyone to contribute to their squads in simple and easy ways DICE allowed everyone to be successful and to receive lots of important team upgrades. This way, teamplay is encouraged but not limited to squads made of friends who use voice communication.

The gameplay is tailored in a way to allow diversity with classes and weapons used. Here, you can be a silent tank hunter even though you play as Recon. Or a mean infantry killing machine as Engineer. The sheer number of gadgets, equipment, and weapons available for each class allows players to take many roles during a match as the same class.

A complete opposite of the Medic rush we're seeing in Battlefield V these days. In Battlefield 4 you can play as any class without committing to a single role and that's another reason why the game is incredibly fun to play. You aren't forced into certain roles thanks to a lackluster design, which is the case in the current Battlefield game.

And then there're tons of weapons. And instead of the game heavily favoring high RPM pieces, you can be deadly with almost any weapon. Here, weapons adjust to your playstyle and not the other way around. Unlocking different weapons means trying them out one by one with high chances of continuing to use your latest unlock. The abundance of weapon attachments allows every weapon to be heavily modified.

This makes every weapon a potential favorite, it only takes some time to test different setups. This system awards every play style. You can run and gun, you are able to snipe from afar, you will mow down people with a shotgun or LMG, you can be great with different ARs. The joy of gameplay diversity in Battlefield 4 is one of the game's greatest strengths.

The problem that plagues Battlefield games for times immemorial are overpowered vehicles. This is something that didn't change for a long time and is present in Battlefield 4. If you're skilled with tanks, choppers, or planes you can become a proper terminator.

Taking vehicles down is a hassle and if we had to pick the biggest downside in the game, it would be OP vehicles. Further, matches can take a looong time to complete. Players can get stuck in weirdest places on every map. And this always happens exactly when you least need it. But overall, the issues don't hurt the overall, experience much.

We can say that Battlefield 4 is still the best Battlefield of them all. The game offers a ton of expertly designed maps, with each map featuring a different layout that favors a different type of warfare.

The ever-present chaos is welcomed here. You can easily find your path in the cacophony of explosions, artillery hits, and screams to become a valuable member of your team even if you're not the best gunslinger on the West. Weapons diversity is another huge plus and class balance gives players the opportunity to be successful with every class.

All it takes is some time for practice and that's it. Even after more than seven years since its release, we can say that Battlefield 4 is still an amazing multiplayer shooter worthy of your time and money.