Superhot is a fantastic shooter/puzzle indie game. Its VR version isn't a simple rework of the base game, with added VR support and no other improvements. It's a standalone game with new levels and it works and plays amazing.

Superhot is a phenomenal shooter game that took the bullet-time feature of Max Payne and created a whole game revolving around it. Back in 2016 Superhot ended as one of the biggest indie hits. The game was a blast to play, fulfilling power trip fantasies of everyone who wanted to be Neo from the Matrix, if only for an afternoon of two.

About a year later, we received a VR version of the game. Developers took the gameplay loop and visuals of the original, created 20 or so new levels specifically designed for VR, and released Superhot VR, a completely new game. 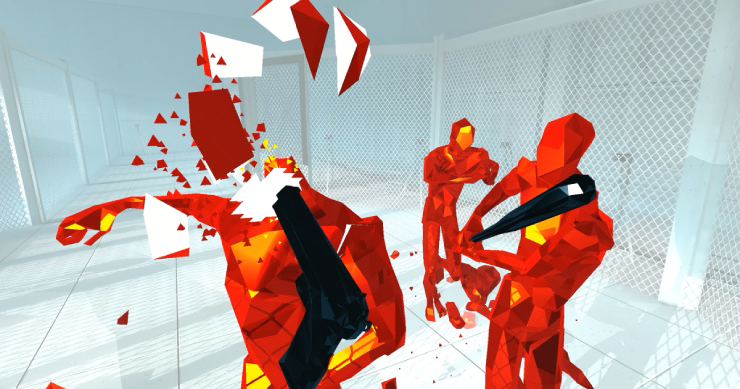 In a nutshell, Superhot VR is a puzzle shooter where the time flows only when you move. This allows you to control the flow of time in such a way to avoid getting shot while using guns to dispatch them.

You can also slash them with katanas, hit them with baseball bats, or throw bottles and ashtrays at them. Each level is a short and blood-pumping combination of shooting and time-controlling puzzles where you have to stay alive while killing everyone else.

The regular and VR version differ in one major thing. While in regular version you can move freely around each level, VR version features stationary gameplay without free movement.

In Superhot VR the only way to move is when the game decides to teleports you at predefined points in each level. And the game works and plays fantastic. The best thing about it is the sheer level of immersion. Once you put the headset on the game takes you to a completely new world that feels extremely convincing.

Even in 2020, two and a half years after Superhot VR got released, there's almost zero VR games that offer this level of immersion. This is achieved by marrying the unique minimalistic visual presentation (think Mirror's Edge-like white environments inhabited by glassy red polygonal opponents and minimalistic black objects) with excellent sound design and precise controls and movement detection.

First of all, the game's white room-like environments create a feeling of being inside a dream. There are no clear boundaries, no immediately noticeable borders of the world the game takes place in. Add a superb environmental sound design, which plays subtle hums and whirrs during the moments of standing still and you got a game that feels like a real world.

The final piece of the immersion puzzle is excellent motion detection. The game knows exactly when you're not moving and can detect even the slightest movements of your hands (at least on HTC Vive), adding to the feeling you're trapped inside a white room where everyone wants to kill you.

Do note that we've seen lots of reports about PSVR version of the game having issues with Move controllers and their finicky movement detection. That means that the immersion could be less convincing if you play the game on PS4.

Anyway, you become mesmerized as soon as you put your headset on and start the first level. But the pleasant feeling of being transported into a dreamy white world is crushed once enemies start hurling towards you, trying to literally shatter you from existence. This is where the fun begins.

The main ingredient of the game is its simple yet brilliant time-controlling mechanic. You have to time your movements in order to shatter enemies before they attack you. At the same time, you have to avoid incoming attacks from other enemies. And once the action starts, it's really something else.

The action calls for calculated movement

The regular version of the game was excellent. But there, the game reacted not to your physical movements but to controller and mouse and keyboard inputs. That means you could take your hands off input devices and think about what to do next while the time stands still. In VR you actually have to stand still while observing the level.

This lifts action to the next level. Any movement means time will continue to flow. In Superhot VR, you have to think not only what to do but also how fast to move.

Hitting an enemy with a super-fast uppercut move means time will flow really fast for a second or two. That means all bullets and other deadly objects enemies send your way will also travel extremely fast, often hitting you before being able to duck or move out their way. 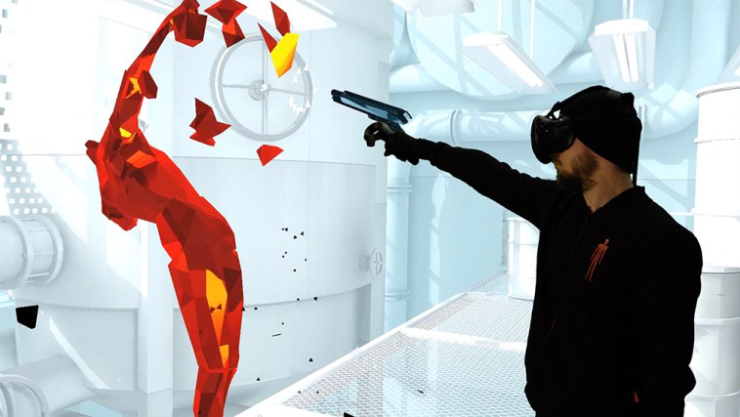 It's way better to move slowly in order to observe the situation, even if that means you'll die the first time. After you find out how a level opens, you are able to respond in a way that lets you stay alive to the end of a level.

You can slowly punch an enemy (one punch, one bullet, one hit with any object shatters them) while moving your head to observe what the foe behind you plans to do. And then you can move around and kick them just before they fire their gun. The gun will be hurled towards you, with you picking it up and firing on an enemy at the right-hand side who is running towards you from afar.

After a while, once you get some experience, you will be able to move like Neo from Matrix. To slowly punch the first enemy and then launch towards the other foe in one quick movement that ends with a fast kick to the face. Then you pick a shotgun and dispatch other enemies in a flurry of shots.

And before you know it, the level's over and you're breathing heavily. The game is filled with these situations, where you need to time your movements in order to survive and eliminate enemies.

Another important part of the Superhot VR is that you don't fire bullets and throw objects at current enemy positions. You need to watch their movement and predict where they will be in the future, which can be frustrating at times. You will often fail at predicting their movement, resulting in missed shots. And that usually means game over.

Difficulty can be frustrating at times

In Superhot, one hit means starting the level all over again. There are no checkpoints whatsoever. This can be really frustrating during the second part of the game, which is filled with complex levels that feature lots of enemies and even more ways to die. But restarting a level over and over again isn't that much annoying because most levels are relatively short.

Level design is a bit different than in the regular version of the game. In Superhot VR, levels are made in a way that encourages interactivity. There are lots of objects placed all around each level, which can be picked up and thrown at bad guys.

The VR version of the game is also filled with moments where it's better to punch foes than to throw objects at them or shoot them. You also can duck and avoid bullets and objects by moving sideways.

This results in highly dynamic gameplay once you get the hang of it. You'll soon find yourself breathing heavily and sweating while playing the game after you learn how to move fast without dying. In a way, Superhot VR is an excellent exercise.

The great thing is that, after you beat the campaign you can play various extra game modes that include infinite enemy waves, which can be a proper exercise.

If you're into story-driven games, Superhot doesn't have much to offer. It's filled with cryptic messages between levels that never deliver. They're interesting and ask lots of questions but don't expect for these questions to be answered. If you want to know the story of Superhot, you should play the regular version after you finish Superhot VR. It features a solid story with a proper ending.

Another downside of the game is its length. The campaign can be finished in about two hours, which is too short. Especially since the action is so damn enjoyable. Luckily, the game offers additional modes, like the aforementioned endless waves of enemies. Other modes include hardcore mode, a mode that only allows headshots, kill-100-enemies mode, and more.

Superhot VR still is one of the best VR games you can play at the moment. Presentation is superb, the action is slick and enjoyable, the level design is perfect for a VR game, and controls are precise (unless you're playing with Move controllers on the PS4).

The only downside is the short length of the campaign and, consequentially, the price. Get it on a sale if you're not planning to play the game after you beat the campaign. But if you like a challenge such as hardcore mode or never-ending waves of enemies, Superhot VR is definitely worthy of its regular price.