Here's A Look At Every Single Fortnite Skin

Because of the way the Fortnite Battle Royale item shop works, you don't ever get the chance to see every single Fortnite skin on the same page. Thankfully, we've changed that by putting together the most comprehensive outfit list on the internet.

Keep in mind that new skins are added regularly. With that being said, this list includes all of the skins as of April 2018.

All uncommon Fortnite skins have a chance to land in the daily items list. In Fortnite, uncommon skins are green and they cost 800 V-Bucks each.

Currently, there are a total of 15 different uncommon skins. Below, we have provided a look at the first five. 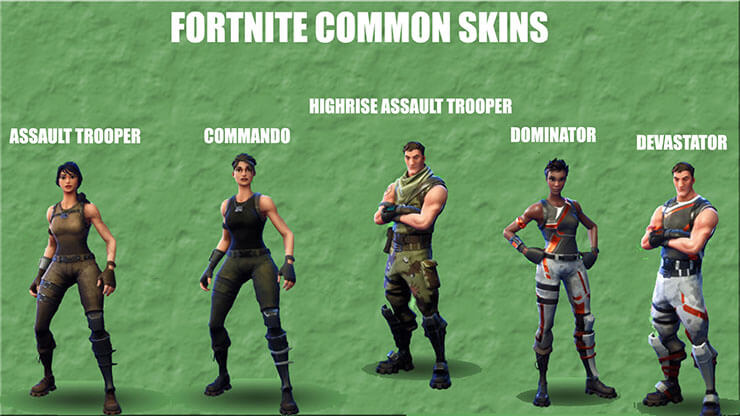 As you can see, these skins have very basic variations of the default characters. 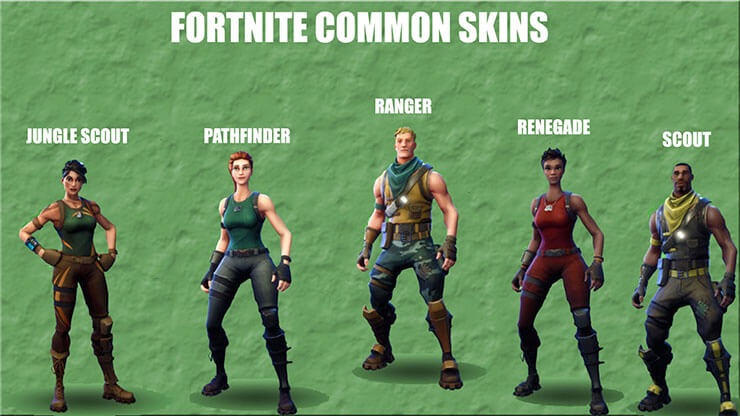 These skins are still nice because they provide a cheap way to be able to choose your own character. Without a skin, you will instead be randomly assigned one of the default skins. 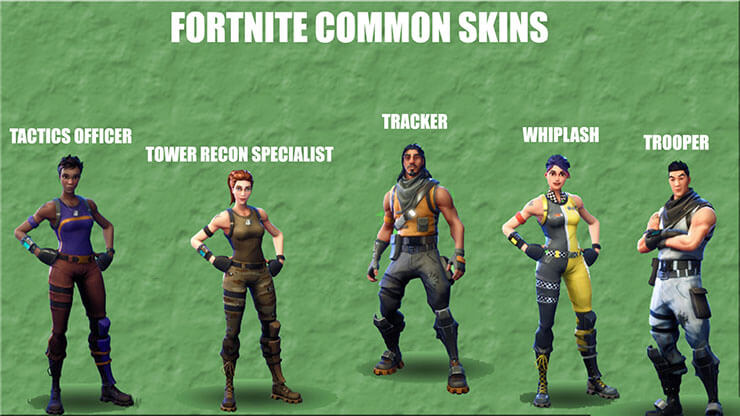 Above is an image showcasing the final five uncommon skins. Like mentioned above, these cost 800 V-Bucks each.

In Fortnite, all rare skins will occasionally land in the daily items or featured items list. All rare skins are blue in color and cost 1,200 V-Bucks each.

The rare skins offer slightly more variation in appearance in comparison to the uncommon ones. Unfortunately, you'll have to keep an eye out for epic and legendary skins if you want a unique look whilst playing Fortnite. 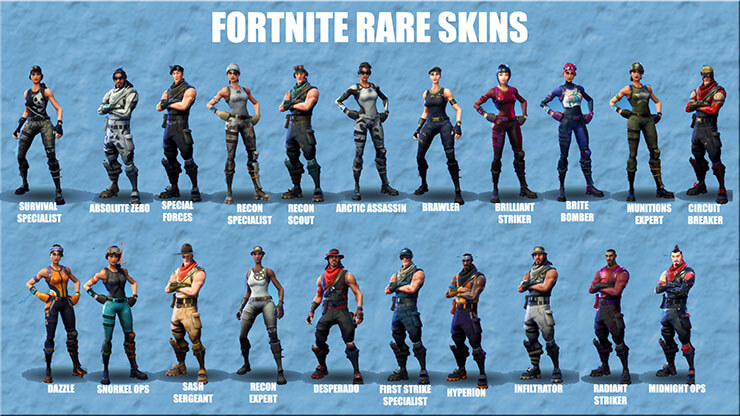 The single image above showcases all 21 rare skins currently in Fortnite.

Currently, there are only three default epic skins in Fortnite. All Epic skins cost 1,500 V-Bucks each and they are purple in color. These skins most often appear on the featured items area in the item shop and rarely in the daily items list. 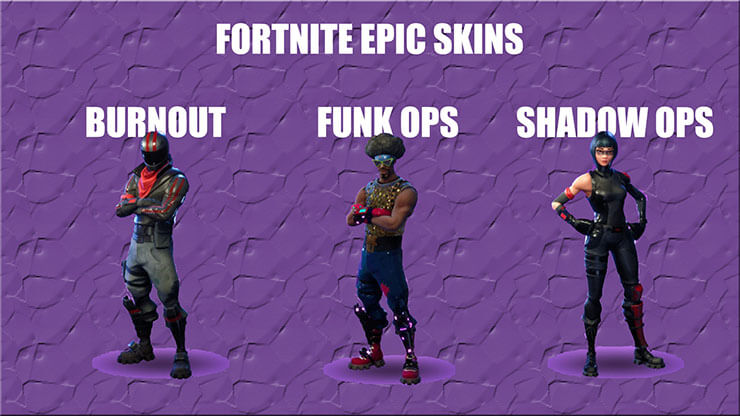 What are your thoughts on these epic skins? This is where your in-game appearance can really start to get wild. 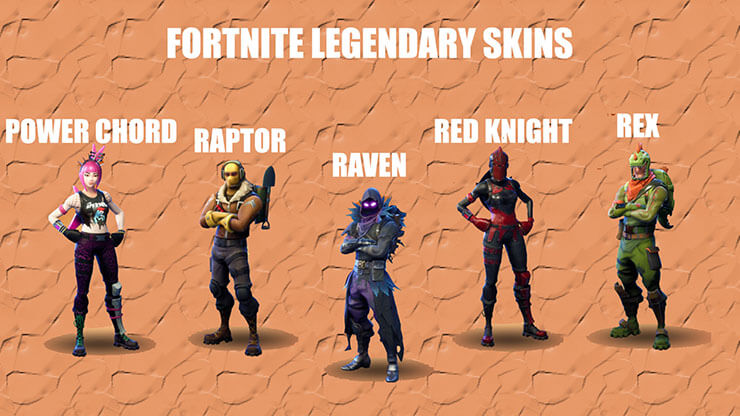 The image above showcases all of the legendary skins currently available in Fortnite. These rarely drop in the featured items list. Not only do you have to save up a lot of V-Bucks to buy these, but you have to keep your eyes peeled or you'll miss them when they land in the item shop.

There's a huge selection of holiday themed Fortnite skins that appear during different holiday events. For example, some skins will be added to the store on valentines day, whilst others might appear on Christmas. 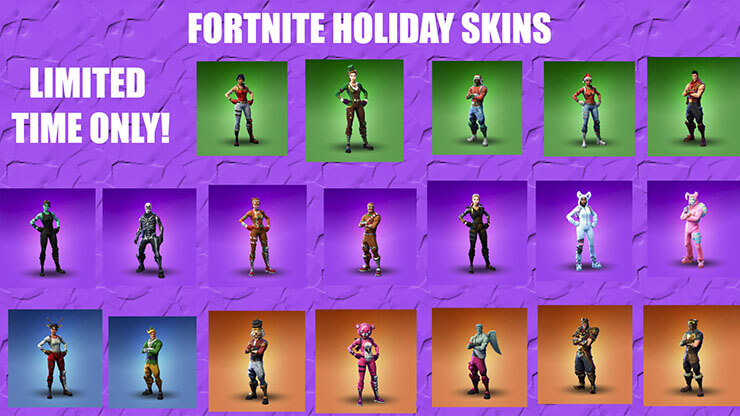 We're yet to find out what happens when another special event hits. For example, we've only had one set of Easter skins so far. It may be the case that the skins shown below get re-added to the item shop temporarily when their corresponding holiday period comes around again.

Alternatively, these skins may never be added back to the game and we may see new skins during the following holiday periods.

There are also some rare Fortnite skins that are very unlikely to ever make it back into the game. An example would be the winter Olympic items. In the image below, the Alpine Ace skins can be seen. 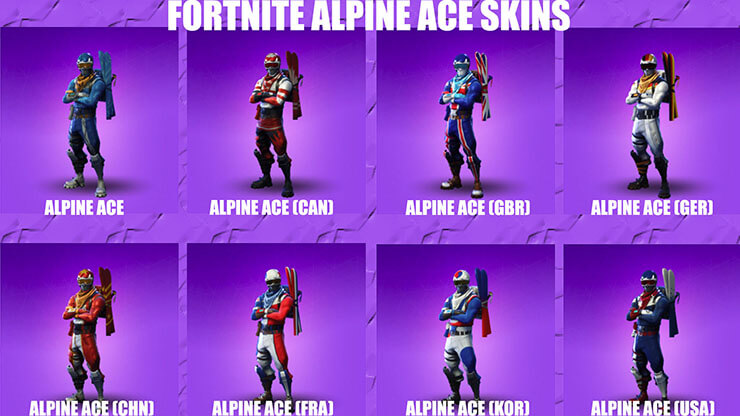 There was also an all-female skin set that was released alongside the winter Olympics. This set was called the Mogul Master set and it can be seen below. 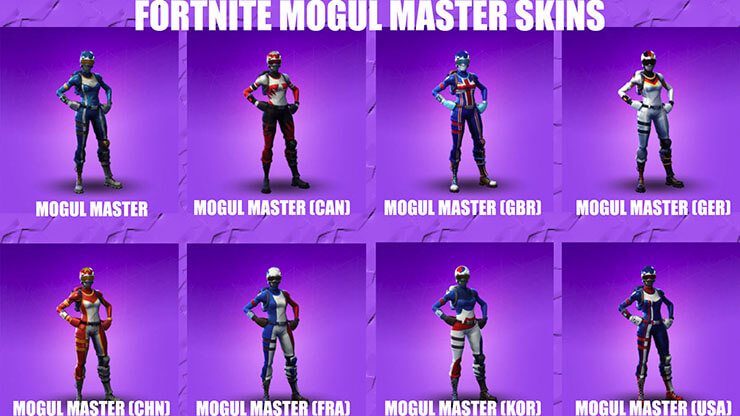 If you were lucky enough to get one of these skins, you should wear it with pride, it may never come back into the game again.

Some Fortnite skins were added as part of a promotional deal with different platforms. Currently, there are a total of four of these skins out there, some of which are still available to this day. 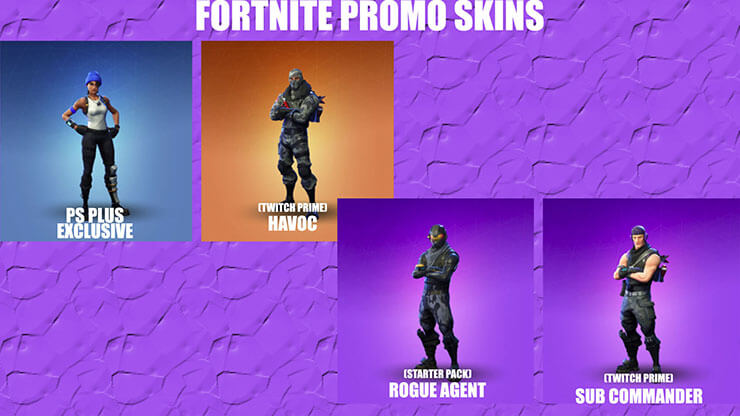 In the image shown above, the four Fortnite promo skins can be seen. Three of these skins were available as part of a deal with Twitch. One skin is available to all PS Plus players.

There's one final skin set to talk about. The Battle Pass skins are unique rewards that are given to players that complete their Battle Pass challenges during each season.

So far, there have been three seasons in Fortnite, and each season has gradually had a larger selection of skins in. For example, there was only two season 1 skins, and they weren't that impressive really, but now that they're unavailable, they are some of the rarest skins around.

There were four season 2 skins, and there are currently six season 3 skins. You can see all skins from the Battle Pass rewards below. 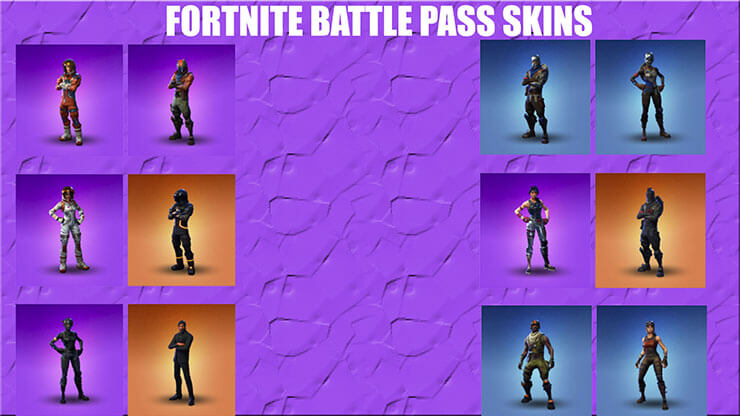 If we're lucky and the trend continues, we may see up to eight different skins for season 4.

Battle Pass reward skins are interesting because you do not need to buy them outright with V-Bucks. Once you've bought the Battle Pass, you must complete the challenges and level up your battle pass to unlock the rewards.

If you miss out on the rewards after the season has ended, you won't ever be able to get the skins again.

Epic Games regularly release new Fortnite skins. Occasionally, they will release promotional artwork or videos for the skins ahead of time. If you want to find out when new skins are releasing, make sure to follow Epic Games on Twitter.

If you see an unreleased skin that you like, you can plan ahead and start saving V-Bucks ahead of time. By the time the skin has released, hopefully you'll have enough V-Bucks saved up to buy it straight away.

If you want tips on how to earn more V-Bucks for free, make sure to read our guide here.

What are your thoughts on all of these Fortnite cosmetic items? Are there any in this list that stands out to you? If you could have any skin from the past that is no longer available, what would you choose?